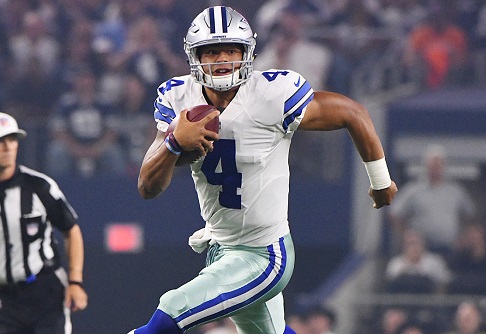 Things went from bad to worse for Prescott last Sunday night. He was swarmed by the Eagles, who forced him into four turnovers. By the end of the evening, Prescott had left his fantasy owners with between one and two points in standard leagues. This came on the heels of his 13-point outing versus the Falcons when he was sacked eight times. However, there is a reason for optimism, even with the Chargers' fierce pass rush coming to town on Thanksgiving: Left tackle Tyron Smith is tentatively expected to play this week after missing the last couple due to a groin injury. No matter whom he has around him, Prescott will be tasked with carrying this offense for as long as Ezekiel Elliott is suspended. But with Smith's return, Prescott will be given valuable time to find his targets or improvise with his legs. The point here is that Prescott is someone you should be looking to buy, as I told you to do last week. Dak's owners should be feeling queasy after his last two games, but you should see if you can ACQUIRE him at a discount before your league's trade deadline. He can only go up from here.

I'm not sold on Perine's talent -- I think he's a run-of-the-mill back, a between-the-tackles pounder who doesn't catch much of anything -- but that doesn't really matter for one reason: The Redskins apparently feel fine with giving him 20 touches. Not that they have much of a choice following the season-ending injuries to Rob Kelley and Chris Thompson. With the Redskins' RB depth so incredibly thin, there isn't much competition in this backfield for Perine, who charged for 117 yards on 23 carries in Week 11. Definitely ACQUIRE him for this week's Thanksgiving night showdown versus the Giants. Perine will be worth deploying as an RB2 for the time being solely based on his workload, and he will probably give you what you need as long as Washington doesn't fall behind and has to abort its ground game. Perine was also mentioned in John Adams' Week 12 waiver wire column.

Agholor has never been a high-volume receiver. Even when he was worth using as a WR2 or WR3 earlier this season, he rarely saw more than five targets per contest. His fantasy stock was buoyed by his penchant for scoring as he reached the end zone five times in Philadelphia's first seven games. Agholor hasn't visited the end zone since and hasn't surpassed 40 receiving yards in any of his last three games. With Alshon Jeffery now clicking with Carson Wentz, and with Jay Ajayi providing the Eagles with another weapon out of the backfield, Agholor has become an afterthought in this offense. His TD run was nice while it lasted. Feel free to CUT him now if you would like.

Your patience must be running thin with Henry after his latest fantasy dud. I understand your frustration. And yet, I'm here to tell you to KEEP him. This is something I mentioned last week, but his upcoming schedule is just too good for him to keep flopping. That doesn't really include this Thursday's matchup with the Cowboys, but after that, he is going to produce.