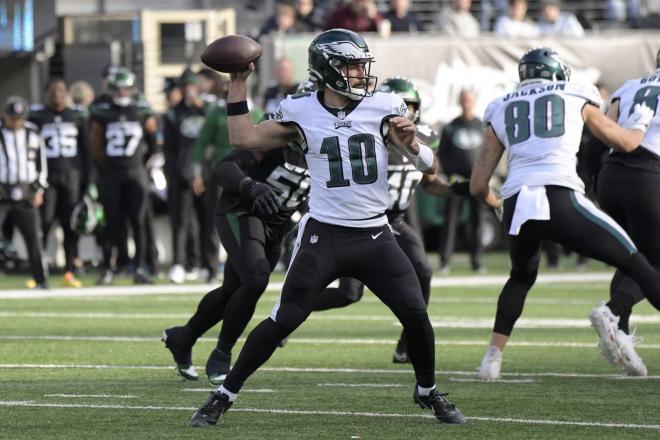 Tua Tagovailo, Jameis Winston, Mac Jones, Trey Lance, Dak Prescott, Zach Wilson, Baker Mayfield and Teddy Bridgewater – this is the list of starting quarterbacks that missed time this year, and it is only Week 6.

Quarterbacks are the highest scoring position in most leagues so planning for injuries to your team’s top quarterback(s) is an important part of managing your fantasy football team.

Ever since the year where my team started with Peyton Manning and Andrew Luck I have always rostered three quarterbacks in my 1-QB leagues – usually two QB1s and one QB2. This week, one manager in my league lost his fourth quarterback in five weeks, and this got me to thinking – should I handcuff my quarterbacks? If you are in a 2-QB league, you might be rostering five QBs and are thinking about this already, but how about 1-QB leagues?

The answer is, “It depends.” It depends on who the back-up is, and what type of league you are in, such as redraft or dynasty. In my dynasty league with a 24-player roster and three injured reserve spots, my quarterbacks right now are Jalen Hurts, Kyler Murray and Jacoby Brissett. Brissett will probably be benched once Deshaun Watson comes off his 11-game suspension, so I started thinking about finding a replacement for Brissett in this week’s waiver wire.

And then I thought with all the injuries many of you are likely asking similar questions. So, I put together the following chart, which shows the starter and back up of each team based on the team’s currently published depth chart, and the stats of the back-up. I have sorted it in order of the rating of the back-up player:

Since I have Rashaad Penny moving to IR this week, it opens another spot on my roster. Since I have Hurts it makes sense for me to roster Minshew, but since it is a dynasty league, maybe I should try to grab Zappe instead, or maybe try to grab both. There is nothing exciting about Minshew, except his moustache (and that rhymes with "must stash"  - so I will take that as a sign.) Although it might not be an exciting move, if Hurts goes down that boring move could be the difference between my team going deep in the playoffs or going no where.

It’s easy to think Minshew will be available on the waiver wire next week – likely that's true. But the minute Hurts is injured, then Minshew will be a hot pick-up, even if he is only a borderline QB1/2, because many managers are already short on QB depth.

The point is, in today’s NFL, you must plan for your QB to go down. Depth is the name of the game to make it through the bye weeks and your fantasy football playoffs, and no position is more important than quarterback. For a dynasty league, you should not only have sufficient depth, but you might want to have a dart throw QB or two in development, such as Zappe.

So, I hope this article helps you think about this, and the chart helps you improve your team.