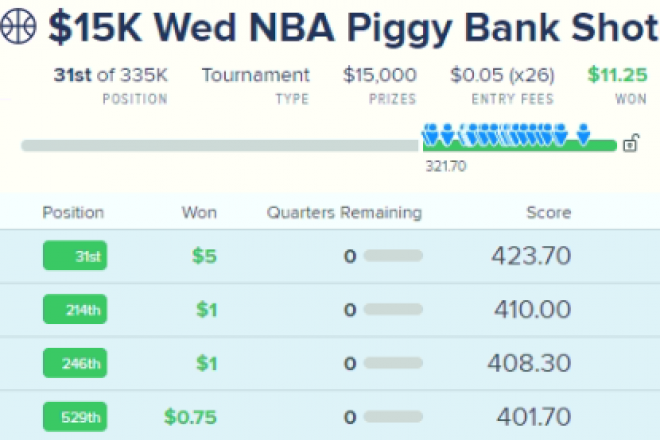 Since October to opening day of the NBA season, I have grown my FanDuel account from $10 to $22 mostly from playing in NFL contests. Now we are two days into the NBA season, and my account is already at $35.60. This is an awesome way to start the NBA season and I hope it is an indicator of things to come.

In this article I describe how I achieved the wins that brought me this success. 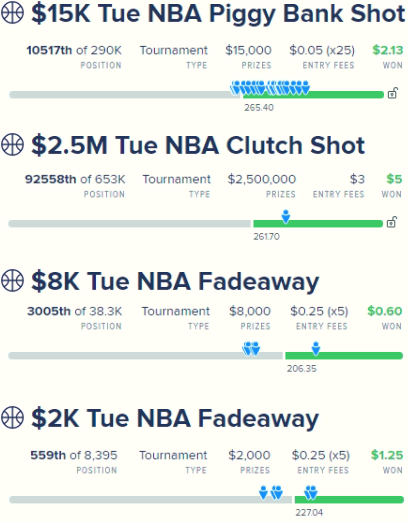 The following table summarizes these results:

The way I think about winning DFS is that there is no strategy or algorithm that can guarantee a big win. Rather my focus is on consistently breaking even or making small gains. I typically spend about 5% of my account to enter a single contest, but never more than 10%. If I can slowly build my FanDuel fund, and keep entering tournament contests, eventually a big win will find me.

So I attempt to find strategies that help me achieve the goal of small consistent growth, rather than directly trying to come in first in a contest.

Here is the log from the multi-lineup generator for the first contest ($15K Tue NBA Piggy Bank Shot): 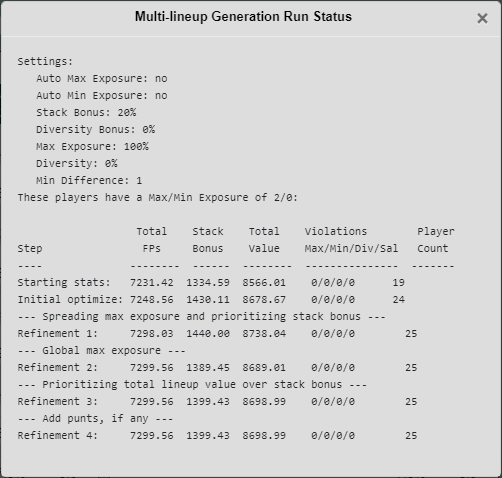 Stack Bonus gets added when two or more players on the same team are in the lineup, which can increase the probability of winning tournament style contests.

I felt the 3.9 fantasy point drop from the single best lineup to the average of the 25 lineups plus the stack bonus of 1399.43 looked good, so I entered these lineups.

FanDuel spotted me a free $3-entry into the $2.5M Tue Clutch Shot, so I just entered the single best lineup. I had just lost four NFL Week 15 Single Game, Single Lineup contests, so I was glad for the $5 win that kept my account moving in the right direction.

For the $8K Tue NBA Fadeaway contest I decided to force a little diversity by turning on Auto Min Exposure. Here is the multi-lineup generator log: 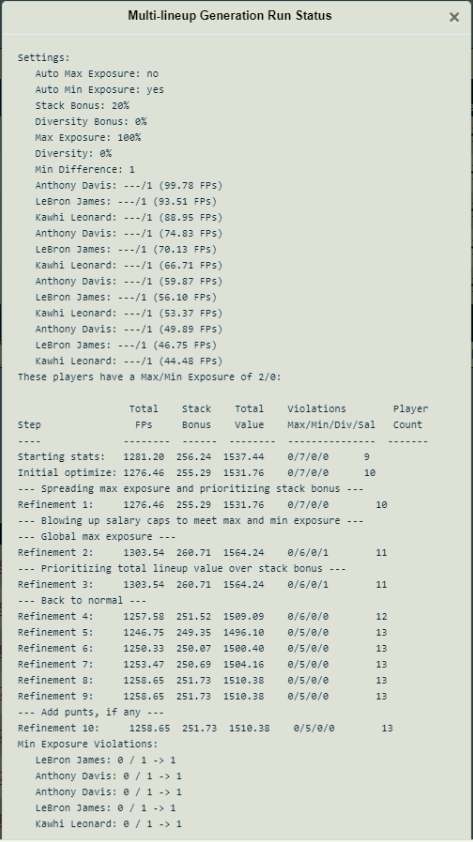 The Single Game NBA slates use MVP, STAR, PRO and UT positions. The ASL DFS Lineup Optimizer treats the same player in each of these positions as four different players. This is why the top of the log lists Anthony Davis four times as having a Minimum Exposure setting of 1. (I will push a new version to production tomorrow morning that adds the player position to that part of the log.) Also, in a Single Game slate, stack bonus should be ignored. (So stack bonus should show up as all zeros in the log. This will be fixed tomorrow as well.)

The single best lineup was projected to score 256.8, and the average for the five lineups was 251.7 (1259/5). The difference seemed a little on the high side, but acceptable, so I entered those five lineups.

For the $2K Tue NBA Fadeaway contest I left both Auto Max Exposure and Auto Min Exposure on. Here is the log file from the multi-generator for that run: 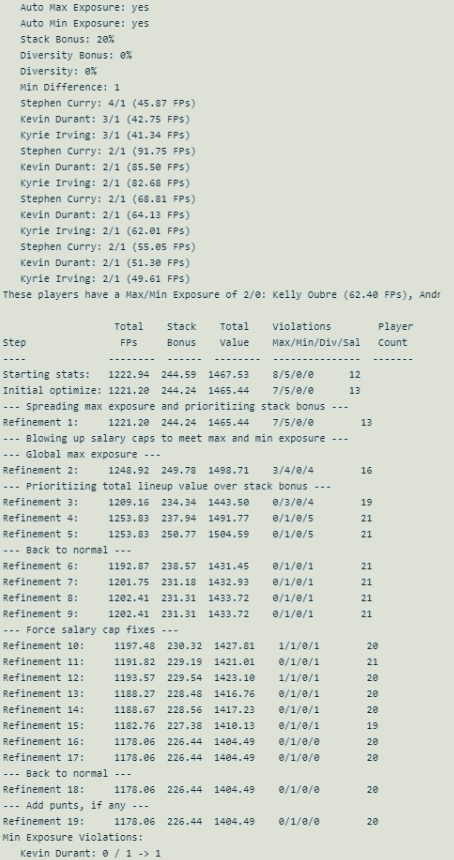 To learn more about the various Pro Options, such as Auto Max Exposure and Auto Min Exposure check out this article.

As expected, this run used more unique players (20) compared with the previous set of lineups (13) because Auto-Max Exposure forces more diversity. The single best lineup was 240.3 fantasy points versus the average of the 5 lineups which was 235.6 fantasy points. This difference seemed a bit high also, but acceptable.

Two of the five lineups won, and the overall result was break-even.

There isn't enough data from these four contests to draw any firm conclusions. Just like for NFL, the Natural Diversity strategy gave a good result. The results of the Single Game entries weren't positive, but in another slate the same strategy might have done well. Overall, Day 1 of the NBA regular season yielded a 33% return on $6.75 in entry fees, so it was a win.

Last night, Wednesday December 23, following similar strategies yielded exciting results. A factor that might have helped last night's winning result might be because the OKL/HOU game was cancelled and perhaps many contestants didn't make adjustment their lineups. I reran all the lineups for all affected slates. Here was my best result: 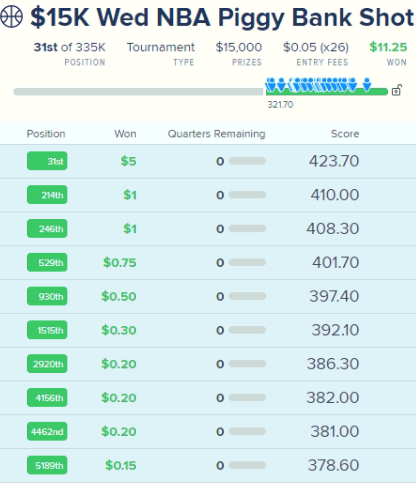 Here is the summary of the results from all my contests from last night:

This type of result won't happen every day. However, it makes the case for sticking to more conservative strategies, that cause my fund to grow a little overall, or at least last longer, and then over a period of time, out of randomness and the law of large numbers, the odds of hitting a big payout increase significantly.

No thanks. I will stick to the contests where a greater percentage of money is returned in prizes.

I hope this article was interesting and gave you some ideas for how you might develop your approach to playing Daily Fantasy Sports. There is no formula or tool that can give you guaranteed wins and it truly is a contest, where you are competing against others submitting lineups. Learning to effectively use the tools you have for creating lineups, out-thinking opponents, being disciplined and consistently evaluating strategies are the things that will give you the best chance to win.

ASL is constantly improving the DFS Lineup Optimizer. You can find write ups on the latest features, known issues and what improvements are planned next under Support/FAQ on the ASL website.