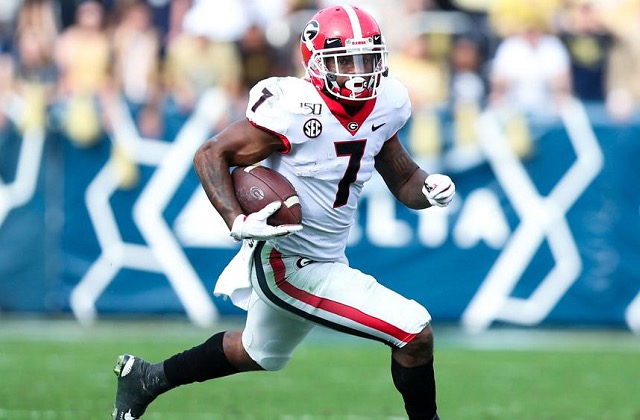 As a precursor to the re-print, in 2021, Leonard came in 2nd in his MFL Dynasty league and entered in the playoffs in 5 of his 6 leagues, winning an MFL keeper league, winning his ESPN league, and coming in 2nd in his Yahoo league.

Building a winning dynasty team isn’t easy. In most leagues you get three to five draft picks a year to select players that haven’t even taken a single snap in the NFL. The only other way to improve your team is through the waiver wire and trading with other team owners. Most team owners know a thing or two about playing fantasy football, so you aren’t going to just float into the playoffs just for showing up, like you can in some free redraft leagues.

With dynasty fantasy football, I have had a similar experience. Just to give a couple examples, I paid a lot for a young Andrew Luck and a young Jordan Reed so I could anchor my team for years to come with a solid quarterback and tight end.

However, there is one fantasy asset that always goes up in value, and that is draft picks. In addition, you can roll them over each year so that they compound interest.

First, I will show you my powder keg room for both these leagues, then I will explain how I got there.

These are the picks I have stored up for my first team: 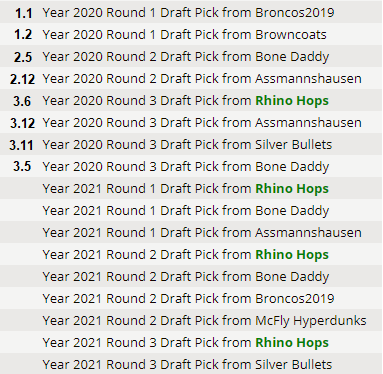 My team is Rhino Hops. Even losing Luck and Reed, I had the 6th best overall record 2019 but didn’t make the playoffs because of the divisional allocation. My team was in the playoffs as the 2nd and 6th seed in 2017 and 2018. So, my team has consistently been better than average, while I have been building up the killer set of picks I listed above. My team is now in a position to get stronger every year even if I win the championship.

These are the picks I have stored up for my second team, which is still just a first-year team: 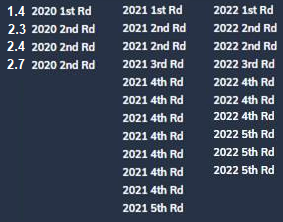 My rule of thumb is to build up 2x to 3x the number of given picks for each future year. My goal is to draft with only top 1st round picks each year and use the remaining picks to generate a great number of future picks and higher future picks.

This is dynasty fantasy football, right? It takes time to build a dynasty, and patience is essential. However, most dynasty team managers value the present much more than they ought relative to the future. This makes it easy to get a good premium for selling picks each year for future picks.

Just like a savings bond that reaches maturity, our picks reach their peak value on draft day. On draft day, a current year second round pick can be traded for a future first round pick or two future second round picks because someone’s undervalued sleeper is still on the board when your pick comes up and they just have to have that player. That’s not me. I don’t have the football knowledge to know who the undervalued sleeper is, and frankly I think once we get to the bottom half of the first round, it’s more luck than skill. From the bottom of the first round on picks are no better than dart throws. For example, looking at my league’s draft history here is the top player by total fantasy points scored in 2019 in the 2nd half of the 1st round, the 2nd round, and the 3rd round respectively:

Following this rule, here are my draft picks over the last four years:

I hit on three out of four picks and I have the #1 and #2 pick this year, and three first round picks stocked up for next year. So, in all likelihood I will add three more dynasty studs to my team in the next two years, and not even deplete my arsenal of draft picks. I am building a dynasty.

Its true studs can be found in the second and third round, but for every stud in the second and third round, there are 10 duds. And all those dart throws take up space on your roster, so most of the picks just get thrown away. If you stay on top of it, you will find that there are almost as many good players available on the waiver wire over the next couple of weeks as there are in the bottom half of the draft: Josh Allen (QB, 332 fps), Raheem Mostert (RB, 168 fps), D.J Chark (WR, 225 fps)

Instead of making dart throws, trade the picks up for future years. Here are three types of pick-for-pick trades I make to run my pick generator and be able to make top picks almost every year:

These are specific ways to accomplish each type of the above trades:

Move up a round:

Move up within a round:

So which trade strategy should you use when?

When you have more than 2x the number of picks in the current year, focus on moving up. Start with your lowest round picks, because if you are caught holding more picks than you want in the draft, you want to be holding your higher picks. Also, if you have a lot of picks, there is a dearth of picks from among the other teams. If you trade away your higher picks first, that dearth won’t be felt as acutely, so it will be harder to trade away the lower picks later. And when you are moving up, still try to maintain the total number of picks, but it isn’t critical.

When the season is running, if you have more than 2x the number of picks for that year, then you can use some of those picks to trade for players to help your roster. But don’t trade for players with your picks until you have more than 2x the picks. And think about the future value of those picks. When you trade for a player because you think you have a chance at winning, you are generally trading away an asset that is going to keep going up in value for an asset that is going down in value. But you must cash in those picks sometime, just don’t destroy your pick generator doing it.

There are additional advantages to this strategy.

Buy players low: Players have an opposite value cycle to draft picks. They are least valuable right before a draft because owners have to drop players to make room for the new players they will pick up in the draft, and they are most valuable around mid-season when its crunch time to get into the playoffs, and most owners aren’t concerned about a draft that is almost a year away. So, while most owners are making hard choices about who to keep and who to cut in order to make space on their roster, you can use the other owner’s pain to your advantage. This is the perfect time to use one or two of your picks to fill some holes in your roster with proven veteran players. Because of this, right before the draft you can usually get some pretty solid veterans in the 26-to-27-year-old age range for a 2nd round pick. Furthermore, since the owner is trying to make space, they will prefer the pick you send them is a future year pick, not a current year pick, because a current year pick won’t help them make space on their roster. Then, if the player stays healthy and keeps performing, you can keep that player for two years, and mid-season after some owner has an injury on their roster, trade the player away for a 2nd round pick.

Receive more trade offers: Other team owners will notice your stash of picks and your active trade style, and when they want something, they will be sure to throw some trade offers your way. I have been surprised at some of the offers that I have received, and these have been a great benefit to my team.

This is the transaction log of trades I made over the past year: (The name of the league is TDs and Beer, my team is Rhino Hops): 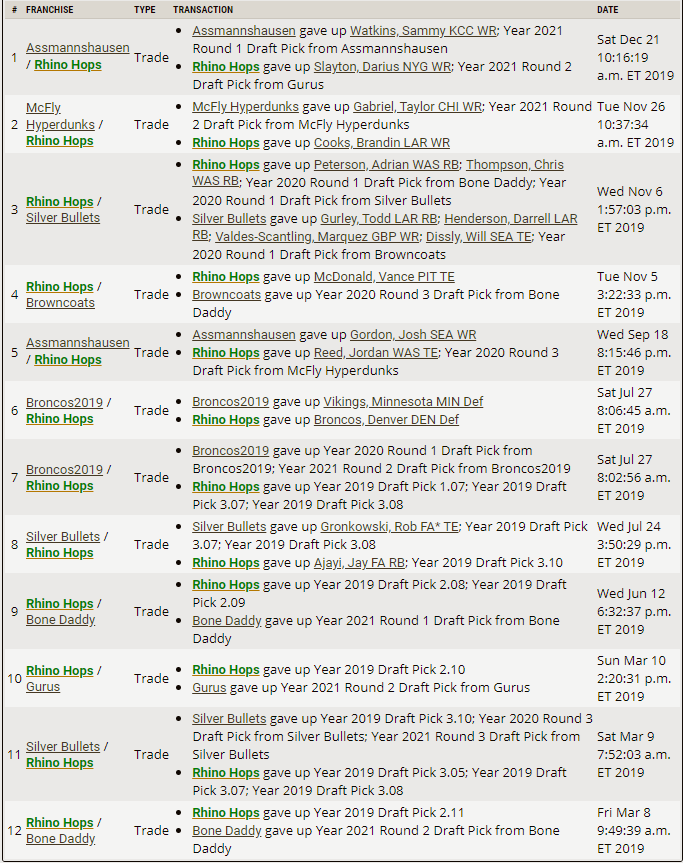 To get a better picture of my trade balance sheet, I like to put them in a spread sheet and cancel out the same players and picks that come in and go out:

From this view, it is easy to see that I picked up the top two picks in this year’s draft and added an extra 1st round pick. Two of the three first round picks I surrendered were bottom have picks.

So overall, I made great gains with my draft picks.

On the player end of the trades, I also got the better side of the deal. I have five players still on my roster, three of which have decent dynasty value, Todd Gurley, Darrell Henderson and Will Dissly. I also received Marquez Valdes-Scantling, who might have some dynasty value, but was in a pinch for a tough bye-week, so I dropped him. He was picked up on waivers and is rostered on another team.

Leaving my team, Brandin Cooks after his fifth concussion is a risky dynasty asset. Darius Slayton might have some good upside, and Vance McDonald is only slightly better than tight ends that can be streamed off the waiver wire.

My other dynasty team is a first-year super flex. I didn’t draft to win my first year. Being a super flex league where quarterbacks get 5 fantasy points per touchdown, I focussed on getting a solid core of quarterbacks with my first three picks, Watson, Goff and Mayfield. (Goff and Mayfield didn’t pan out as I hoped, but still not a bad core overall). I also picked up Leonard Fournette at a bargain price. My other priority was to build my draft pick generator. Here are the trades I made over the last year:

I made a mistake trading away D.J. Chark for a 2nd, but I had just picked him up on waivers, so didn’t have a good sense of his value. However, it’s okay. I will likely trade that 2020 2.03 pick for a 2021 1st round pick. Otherwise I traded away veteran players that are declining in dynasty value.

Now, if we remove the duplicate picks, we can see a clear picture of my trade balance sheet over the last year:

So now I am waiting for draft day, dreaming about how two or three of these players, D’Andre Swift (RB), Jonathan Taylor (RB), Jerry Jeudy (WR), CeeDee Lamb (WR), might help my teams next year. Should I take the two top running backs, the two top wide receivers, or one of each? What a great problem to have.

I hope this article was helpful and that you enjoyed reading it as much as I did writing it. Wishing you a great 2020 dynasty rookie draft.