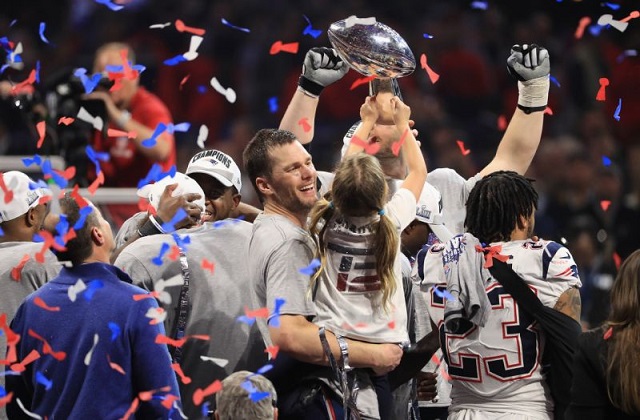 As founder of ASL, a company that makes tools for all types of fantasy sports leagues, part of my job is to play fantasy football in different types of leagues. As I develop winning strategies, I like to consider how to get those strategies into the tools. One of my favorite leagues to play in is a draft-only survivor league. If you play in a survivor league, then you know that from Week 1, you are essentially in the playoffs because each week if your team has the lowest score of the remaining teams your season is over.

Besides the obvious need to pick players that are going to score a lot of fantasy points, there are three major factors that must be considered as part of your draft strategy to have the best chance of winning a draft-only survivor best-ball league:

- The competition gets tougher each week

So now I will explain my draft strategy for taking these factors into account:

As the season goes by, inevitably the injuries pile up. Since you can't make waiver moves, this is much more of a factor in draft-only leagues than regular leagues. The first obvious mitigation is that when you draft, ensure you don't have top players lined up on the same bye week. This way if one of your top players gets hurt, at least there is a good chance that your other top players will be scoring points for you that week.

Then you will also want to have sufficient depth at each position so if you RB1 or QB1 goes down, hopefully one of the dart throws you took near the end of your draft will step up and ease the pain. Planning for this comes down to roster composition. So the way I decide my roster composition is to look at the last three year's of the leagues history and look at the top three teams from those years to get a sense of the average winning composition. Then I try to model my team after that.

Now there is one more twist to this. I play in a league with 14 teams and the quarterback position generally scores the most points. This means that in my draft, I have to be sure to snag two good starters before they are off the board, and this means drafting QBs higher in the draft than in regular head-to-head leagues. With the ideal composition in my league being only two QBs, I don't have room on my roster to take a back up quarterback. So I have to spend the picks before decent starting QBs go off the board.

In summary, no matter what you do, injuries can end your season in a draft-only league, but with careful bye-week management, getting critical positions before they are off the board, and proper roster composition, you have a better chance of surviving a couple of unfortunate injuries to your team.

In a regular head-to-head league, you don't have to win all your regular season matchups. In fact, it is better to lose one matchup by a huge amount, and have a better chance to win your other matchups, which is why some people like to stack their team to have top players on the same bye week. However, in a surviver league the exact opposite is true. You are in the playoffs from Week 1 and if you end up with a week where multiple top players are on a bye week, you have a very good chance of being eliminated.

Therefore, the strategy is to try to keep your top players' bye weeks spread out. So when I draft, I do my best to ensure that my QB1, RB1, WR1, TE1 and even my RB2 and WR2 have different bye weeks.

Then, since it is best ball, the more active players you have for a position each week, the better chance you have that one of them will pop. If you have six RBs, to fill two starting slots and potentially a flex position, then you have six chances for a good score. If two of your RBs are on a bye week, now you have only four chances for good scores to fill at least two positions, and potentially the flex position. As you add more players, your chance of one of them getting a good score goes up, but as the number of players increases, the probability that the additional player will be one of the top scorers that week, goes down. For example, if I have two players, and add a third, all things being equal, that third player has a 33% chance he will be the top scorer, so he added a 33% chance of improving the score. If I have 99 players, and I add one more player, then he has a 1% chance of being the top scorer. So therefore, it is better to spread out the bye weeks and not have any two players of the same position on the same bye week. Two weeks of 5 out of 6 players is better than two weeks where one week is 4 out of 6 players and the other is 6 out of 6 players. The fifth player adds a 20% chance of improving the score, but the 6th player only adds a 16.7% chance of improving the score, so you lost three percent of opportunity in the later scenario.

The Competition Gets Tougher Each Week

Now this is the toughest part of all. In regular fantasy, we look for players on teams that have easy matchups in the playoffs. And that strategy still applies for survivor leagues since if you survive to the later part of the season, your team will be playing against other top teams.

However, in a survivor league, there is more to it than just finding players with good end-of-season matchups. In a 14-team league, in Week 1, you only have a 1 out of 14 (7.1%) chance of being eliminated if all else is equal.

The following table shows how many NFL teams are on bye week each week in 2019, how many teams are left in a 14-week survivor league, and your chance to be eliminated:

* In the last eight weeks, our league uses the combined score of each team for two weeks to decide which team is eliminated.

In our league, we have a 28-player roster, so that means during my draft, I have to deal with 28 player bye weeks. These 28 player bye weeks are going to be distributed across Weeks 4 through 12. Randomly they would be spread proportionally to the number of NFL teams on bye week for each of those weeks. However, since the competition gets tougher during the later part of the season, it helps to take bye weeks earlier in the season when possible. Drafting only defense and kickers with bye weeks from 4 to 7 should be easy and therefore should be a no-brainer. Keep in mind that in Week 4, your team only has to be one of the top 10 out of 11 teams to make it to the next week. In Weeks 10-11, your team must be one of the top 4 out of 5 to make it to the next week, after having nine previous weeks of a culling of the weakest teams. The percentages in the table above don't really tell the whole story, because in Week 1, you are playing against the worst, average and best teams. So if your team is average, you will make it to Week 2. In Weeks 14 - 17, you are playing against the best of the best teams, so if your team is average (and by some miracle just happened to survive to Week 17), you don't really have a 50% chance to win in Week 17. Likewise, this is true for Week 4 versus Week 12. In Week 4 there are still several below average teams in the league, so it is okay if your team is not at peak efficiency. If you can win by 1 point in Week 4 because you have some extra players on bye in Week 4, so that you have less players on bye in Week 12 than your competition, then you did your job well. (Okay, hopefully you won't cut it that close, but hopefully you also get the idea.)

Keeping all these things in mind while drafting is nearly impossible, especially in a 90-second draft. In order to be prepared, I make an Excel Sheet prior to my draft to help me keep track of how much depth I still need to add for each position, what my desired bye week allocations are, and comparing my drafted roster to that allocation.

This is an image of my excel sheet from last year: 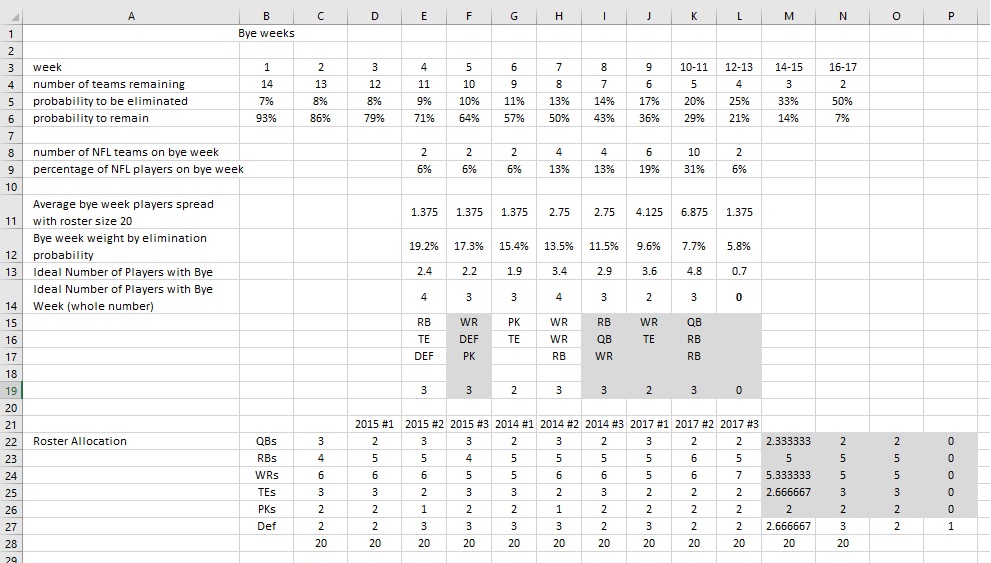 Hopefully from the strategy I described, you can understand this spreadsheet. In the eight years I have played, I have won once, and been in the top 4 several times.