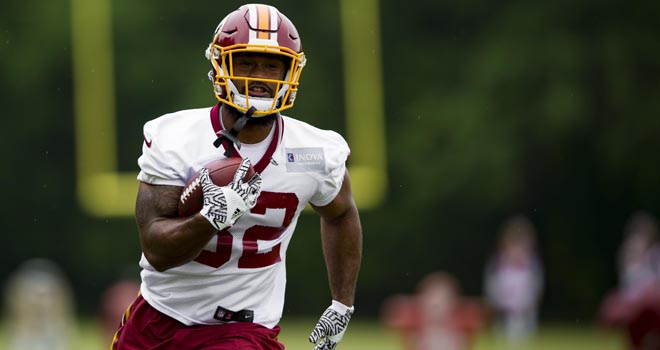 A rough start to his rookie season has finally turned around for Redskins RB Samaje Perine. Yes, the rookie STILL has a fumbling problem, but once Chris Thompson broke his leg, Perine became the Redskins' starting RB for the foreseeable future. It also doesn’t hurt that Perine had his best game of the season against the Saints during Week 11 as he rushed 23 times for 117 yards and a score. Washington leans heavily on its running game, so Perine will see a heavy volume of touches throughout the remainder of the season.

Last week, we featured New England RB Rex Burkhead as a prime waiver-wire pickup, but he committed the ultimate sin in Bill Belichick's eyes in Week 11: He fumbled. Even though Burkhead didn't lose the fumble, this mistake opened the door for Patriots RB Dion Lewis, who wasted no time cashing in on a prime opportunity. Lewis caught all four targets from Tom Brady for 28 yards and a touchdown to go along with 10 carries for 60 yards. Lewis has already vaulted past James White on the depth chart, and the sky is the limit as long as he holds onto the ball. Any New England back is fraught with risk because of the fickle Belichick, but Lewis seems to have grabbed the top spot for the Patriots.

As Denver’s season tumbles further into the abyss, the Broncos are taking away the majority of carries from C.J. Anderson and handing them over to second-year back Devontae Booker. Booker’s value for fantasy owners will be more as a receiver after he netted five catches off of six targets for 54 yards against the Bengals this past Sunday. He also took on one more carry than Anderson, 14-13, and out-snapped him, 48-29. This doesn’t mean that the Broncos are phasing out Anderson, but it appears that Denver will finish the season with a two-headed rushing attack, making Booker a worthwhile pickup.