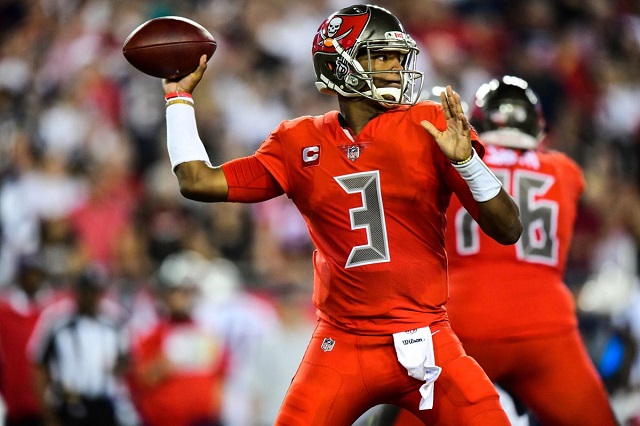 Winston's ban had been reported a week earlier but it officially came down from the NFL's league office Thursday. He was suspended for a violation of the league's personal conduct policy. Winston apologized for the incident in March 2016 when he which led to the suspension -- he groped an Uber driver. The NFL went on to say that any further personal-conduct violations could lead to a lifetime ban for Winston.

Fantasy Take: Who's ready for more Ryan Fitzpatrick in their lives? Those in standard-sized fantasy leagues can ignore him, but those in deeper two-QB formats can at least consider him a bottom-barrel QB2 for Tampa Bay's first three games -- at Saints, versus Eagles, versus Steelers -- simply because the Bucs are going to be among the league leaders in pass attempts. Tampa Bay aired it out 605 times last season, trailing only the Giants and the 49ers. That volume has value.

Earlier today, I lowered Winston in my QB rankings to No. 21. However, Mike Evans remains a low-end WR1 for me.

Turbin let the world know via Twitter on Friday that he will be suspended for four games due to a violation of the league's standard on performance-enhancing drugs. And then he was. Turbin apologized for what he called "a mistake."

Fantasy Take: Turbin was already a non-entity for fantasy owners, and this just makes that fact clearer. Marlon Mack, Nyheim Hines and Jordan Wilkins -- all of whom have varying levels of fantasy sleeper/upside appeal for this season -- stand to benefit the most while Turbin is out. However, I don't think there's any question that Mack, the only man in that trio with any pro experience, leads the pack. He underwent shoulder surgery this spring but should be OK for training camp. He totaled 583 yards from scrimmage on 114 touches in his inaugural season, including 21 receptions. He currently has an eighth-round ADP in standard leagues, according to Fantasy Pros.

Hines, a diminutive player with sprinter's speed, is a better lottery ticket than Wilkins.

Just checking in on Luck, who, yes, is still OK. He started throwing a regulation football earlier this month and said then that he is pain-free. When asked recently again if the shoulder has flared up, Luck said, "No, no, no, not at all."

Fantasy Take: As we work deeper into the summer and closer to the start of the season, I assume we'll have a story about Luck's throwing shoulder every day. As is, fantasy owners have to be pleased that he is finally showing progress. I moved him up in my QB rankings from No. 16 to No. 13 today.

Pats beat reporter Mike Reiss opined Friday that Burkhead is "more likely" to open the season as the team's goal-line back than rookie Sony Michel. Reiss gave a few reasons for his stance: Burkhead performed well in that role last season, Michel has some ball-security concerns coming out college, and other prototypical big backs such as Jeremy Hill and Mike Gillislee remain on the roster (for now) and can fill that role if Burkhead falters.

Fantasy Take: Burkhead scored five rushing touchdowns on just 64 carries last season. The Patriots' backfield hierarchy can change in an instant, but if Burkhead does win and keep that goal-line gig, he's going to have clear RB2 value. New England has tallied 35 ground scores over the past two seasons, the fourth-most in football.