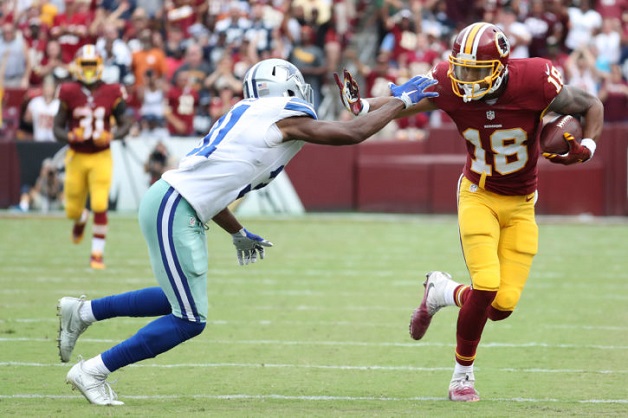 I guess we'll see next summer how many people remember how productive Fuller was whenever he was on the field with quarterback Deshaun Watson. Right now, however, he's getting the WR4 treatment in many early 2018 positional rankings. He has two major flaws -- he has dealt with myriad injuries in his first two seasons as a pro and his hands can turn to stone at a moment's notice. But Fuller's elite speed mixed with Watson's big arm combined to make a lot of magic in limited time this season as Fuller scored seven touchdowns in four games with his rookie QB. He's not going to have a 28-touchdown season, but Fuller's innate big-play ability will make him easily worth his mid-round draft price. Let's just hope that both he and Watson can make it through 2018 relatively unscathed. While there's no overtaking DeAndre Hopkins, I think Fuller has solid WR2 upside in fantasy leagues.

This selection is largely dependant on Kirk Cousins remaining in D.C., but assuming he does, Doctson looks primed to take a big step forward next season. Terrelle Pryor flamed out in Washington and because of that, Doctson appears to be Washington's top option out wide right now. His red-zone prowess has always been evident and he showed it late in the year with three scores in his final six games. He was also targeted 23 times in Weeks 16 and 17 combined. Granted, he caught just six of those targets, but another full offseason with Cousins should only help grow their rapport and make Doctson a more efficient player. While Jamison Crowder and Jordan Reed man the middle of the field, there's not much outstanding competition currently in the WR corps to challenge Doctson for that lead role outside the numbers. Thus, expect Cousins to continue to look Doctson's way a lot more often next season, especially deep down the field or when the Redskins are close to the goal line.

Editor's note: The Josh Doctson selection was made a few hours prior to the Redskins' trade for Alex Smith. Given Smith's proclivity toward safe throws, Doctson's 2018 fantasy upside isn't as high as it appeared on Tuesday morning.

Keenan Allen is the Chargers' unquestioned No. 1 wideout, but if a major injury befalls him as it did in 2015 and 2016, Williams may be the main beneficiary. His own injury history is a concern; the No. 7 overall pick in last year's draft, Williams' rookie year was basically a wash due to a herniated disc in his back that he developed during the spring. Plus, a neck injury forced him to miss nearly the entire 2015 season at Clemson. But at 6-foot-4 and possessing fantastic body control, Williams has the physical skills to be a huge difference-maker for the Chargers, who may move on from impending restricted free agent Tyrell Williams. Considering that L.A's current wide receiver corps beyond Allen and the possibly departing Williams contains Travis Benjamin -- a cut candidate -- and little else, Mike Williams is going to have a big opportunity to establish himself as a starting-caliber player in 2018. At the very least, his raw stature should lead to him seeing a good amount of end-zone jump balls next fall.

Check out these other 2018 fantasy football articles: