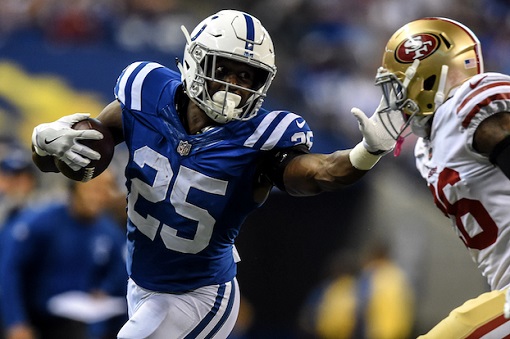 QB Josh McCown, New York Jets: McCown has been a regular in this column throughout the year and it is quite surprising that he hasn't been snapped up in more leagues. He is owned in 42.4 percent of ESPN leagues but ranks seventh in quarterback fantasy points for the year. This week, a big playoff week for many leagues, McCown will face a Denver Broncos team that has been very poor this season and made Jay Cutler look like a viable fantasy starter last week. McCown's remaining schedule looks decent as well with the Saints, Chargers and Patriots to follow. Those matchups present good opportunities for McCown even though three of his four remaining games are on the road. If your regular QB has a tough matchup, look at McCown to help guide you through this first week of playoffs and perhaps beyond.

RB Marlon Mack, Indianapolis Colts:
Owned in just 18.7 percent of leagues, it's amazing that Mack is still available in so many leagues. This Sunday, the Colts will go up against the Buffalo Bills, who have allowed an astounding 13 TDs to running backs in their last six games. Whether it comes via a handoff or a pass out in the flat, you have to like Mack's chances of scoring in Week 14. Next week, he plays against the Broncos followed by the Ravens, so he represents a good add for the playoffs if you are in a tight spot at RB.

RB Rod Smith, Dallas Cowboys: Smith hasn’t made the most of his opportunities, and I expected him to be the primary back when Ezekiel Elliott was suspended. However, Alfred Morris has filled that role for Dallas. Against the Giants this Sunday, the Cowboys should be able to move the ball on the ground, and I think Smith will see double-digit opportunities. He has scored TDs in back-to-back games, and I expect Smith to find the end zone at least once this weekend as well. He has a limited shelf life with Elliott returning in a couple of weeks, but if you are thin at RB, grab Smith for the next two games.

WR Jermaine Kearse, New York Jets: We mentioned McCown at the QB position, and he has enjoyed throwing to Kearse and Robby Anderson over the past couple of games against Carolina and Kansas City. Against a downtrodden Broncos team, Kearse should see lots of opportunities. He has surpassed 100 yards in each of the last two weeks and might vault you to a championship if he is available in your league. Kearse is on the wire in about 55 percent of ESPN leagues.

WR Dede Westbrook, Jacksonville Jaguars: Westbrook has been a popular player in fantasy circles, especially dynasty leagues, where his return from injured reserve in Week 11 was highly anticipated. That being said, he is still out there in more than 85 percent of ESPN leagues. Westbrook received a lot of attention from Blake Bortles over the past two games, hauling in six passes in each game on 19 total targets. With Seattle's defense needing to lock in Marqise Lee, I am expecting Westbrook to score his first NFL touchdown this weekend while also posting solid reception and yardage totals. He faces Houston, San Francisco and Tennessee in the coming weeks, all of which appear on paper to be good potential matchups for Westbrook.

TE Stephen Anderson, Houston Texans: C.J. Fiedorowicz was placed on IR on Tuesday after suffering another concussion in Week 13. Anderson played well in his stead, pulling in five of 12 targets for 79 yards and a score. He has a decent matchup this week against San Francisco, which has permitted six touchdowns to tight ends since Week 7. After that, Anderson will face Jacksonville, Pittsburgh and Indianapolis, respectively. He should see plenty of snaps and targets over the next few weeks, so pick up this athletic second-year player if you need some help at TE.