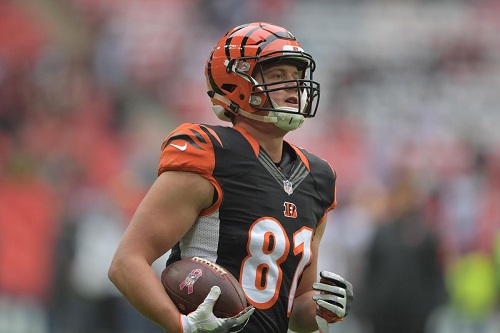 QB Andy Dalton, Cincinnati Bengals: Dalton is owned in just over 40 percent of ESPN leagues, so if your regular starter is on bye, odds are you can still grab him for Sunday's game against the Indianapolis Colts. Indianapolis is giving up the sixth-most fantasy points per game to opposing QBs. Dalton has had a patchy start to the year but against weaker secondaries such as the Packers and the Browns, he has played well and put up good fantasy totals. In addition, the Bengals are at home and starting to get into must-win territory for their head coach, Marvin Lewis. Add to that the fact the Colts have struggled to get pressure on quarterbacks and it sets up for a decent fantasy day from Dalton.

RB Dion Lewis, New England Patriots: It's hard to predict the usage in the Patriots' backfield, and that makes this deep sleeper pick a tricky one. Of course, by their nature, a deep sleeper is someone you don't necessarily expect to pan out but are hoping for a home run in a spot start. Over the past four weeks, Lewis, who is owned in 35.5 percent of leagues, has seen an increase in usage each week. While that hasn't resulted in huge fantasy outputs, it has raised his floor substantially. Lewis has averaged about nine fantasy points per game and has found the end zone twice over the past month. This week, he goes up against a Chargers defense that has been mediocre against opposing running backs. I expect Lewis to see decent usage, continue his recent trend and post somewhere between 9-11 points.

RB Jalen Richard, Oakland Raiders: With Marshawn Lynch suspended for this week's game against Buffalo, that likely means Richard and DeAndre Washington will split the workload, with head coach Jack Del Rio likely to go with the hot hand. While either of the Oakland backs would represent a decent streaming option for this week, Richard appears to have more upside due to his big-play ability and greater involvement in the passing game recently. Both players are available in at least 80 percent of ESPN leagues.

WR Bennie Fowler, Denver Broncos: This week, the Broncos go up against a Chiefs defense that has been struggling in recent weeks. Specifically, they are not pressuring the passer and the secondary is giving up chunk plays via passing or penalty yardage. While the penalty yards don't help fantasy owners, those plays open up an opportunity for red-zone targets. With Emmanuel Sanders injured, Fowler became Denver's No. 2 WR last week against the Chargers, and with Demaryius Thomas being double-teamed consistently, Fowler was heavily targeted and managed to pull in five passes for 45 yards. While those are not exactly mind-blowing numbers, they represent a pretty reasonable floor for a player with decent upside potential. If Fowler can get some red-zone looks Monday night, he might pay immediate dividends. He is owned in just 10 percent of leagues.

WR Josh Doctson, Washington Redskins: Much has been written this week about the Redskins' WR depth chart, and with the apparent demise of Terrelle Pryor, many have speculated that Doctson will see an increased role for the rest of the season at the expense of Pryor. Whether that actually happens will be interesting to watch. However, what is clear is that Doctson is a talented yet raw wideout and could be a great pickup for the stretch run of the fantasy season. Kirk Cousins is a volume passer who likes to throw deep, which generally bodes well for WRs. This week, the Redskins take on a Dallas secondary that is relatively weak, and the 'Skins are looking to bounce back after being soundly beaten by the Eagles last week. Doctson has been a boom-or-bust player this year, having found the end zone twice despite catching just seven passes. If you are struggling at wideout this week, Doctson could be a difference maker in your fantasy lineup. With a 15.9 ownership percentage, he is probably available in your league.

TE Tyler Kroft, Cincinnati Bengals: Since Tyler Eifert was placed on injured reserve earlier this month, many fantasy owners have been watching Kroft to see if he is a real fantasy option or a flash in the pan (a la Marcedes Lewis in Week 3). Well, Kroft still seems to be a fairly large part of the Bengals' offense, especially in the red zone as he has tallied three touchdowns over the past three games. The Indianapolis Colts provide a great matchup for Kroft, who is owned in just 23.6 percent of leagues. This matchup is so friendly, you might even be able to stack Dalton and Kroft in your daily fantasy lineups this week!