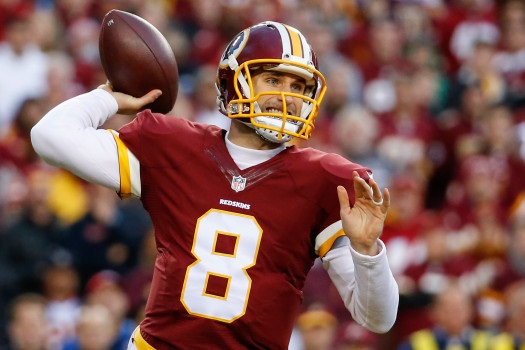 Although he has accrued at least 20 fantasy points in each of Washington's past four games, Cousins is still an economical buy for this weekend's matchup versus Dallas. The Cowboys' defense should scare Captain Kirk; they have permitted the eighth-most fantasy points per game to QBs, and that's even after they held C.J. Beathard to 235 scoreless yards last weekend. Washington would be wise to attack the 'Boys through the air rather than with their merely average ground game in what should be a high-scoring affair. As the 10th-most expensive quarterback on DraftKings, Cousins is a relative steal.

This entry makes the gutsy assumption that the Bengals will actually use their most talented players as they should. That hasn't always been the case in Cincy. It certainly wasn't last week after Mixon racked up 48 yards on seven carries in the first half at Pittsburgh and was then rewarded for that showing with exactly zero carries in the second half. Mixon rightfully complained after the game, so feel free to prop up the "squeaky wheel" narrative here if you're into that kind of stuff. However, Mixon is more than a narrative-based start this weekend. The Colts have allowed the second-most fantasy points per game to the RB position this year and have seen five running backs score on them in the past three weeks. The Bengals need to brush Jeremy Hill and Giovani Bernard aside because Mixon is their best backfield weapon. It's just hard to explain how they don't see that. Perhaps Mixon's chirping will lead to an expanded workload. The Bengals should be able to run often at home against the toothless Colts.

Right now, we're all living in Wentzylvania. Carson Wentz is a rising tide that's floating all boats. That includes Agholor, who has scored in three straight games. He looks like a safe bet to make it four in a row this weekend at home versus the hapless 49ers. The USC alum has averaged 16.4 fantasy points on DraftKings during that time. Perhaps the lone moderate downside is that Agholor has seen only 21 targets over the past four weeks, but that's the same number of looks as presumed No. 1 wideout Alshon Jeffery, who will cost you $1,200 more. Again, this article is all about value and although Agholor's price is trending upward, he remains well worth your investment.

Let's go back to the well in Cincy to find a dirt-cheap but valuable tight end. Kroft has caught 14 passes and three touchdowns over the past three weeks. You already know how bad the Colts are versus the run. They aren't much better at stopping tight ends. Indy has given up the seventh-most fantasy points per game to TEs, including touchdowns to the likes of Marcedes Lewis, George Kittle, Luke Wilson and David Njoku. If those guys can find the end zone, surely Kroft can do the same. He doesn't have a very high ceiling, but he has developed a seven-point floor recently, and you can not beat his slim price tag.