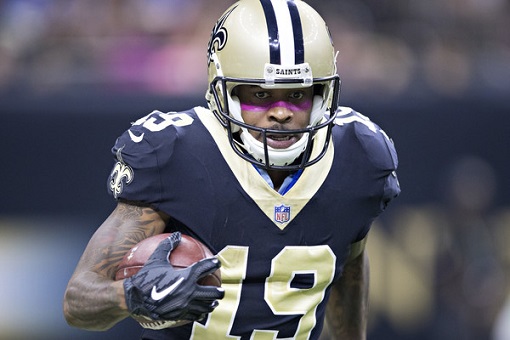 For anyone who has been playing fantasy football for at least three years, you know that it’s very difficult to trust Saints WR Ted Ginn. He is the very definition of boom-or-bust. He can catch a 70-yard touchdown strike or walk off the field with zero catches. But maybe, just maybe, Drew Brees has turned Ginn into something more than a touchdown-dependent fantasy asset. A lack of targets has always been the problem with Ginn, but this season, Brees has targeted the former Panther at least five times in three of six games. Ginn caught all seven of his targets for 141 yards during Week 7 on the road against the Packers. Even though there is still risk, Ginn is worth a roster spot as the Saints hit a soft spot in their upcoming schedule with games against the Bears, Bucs, Bills and Redskins.

Yes, Dolphins wide receiver Kenny Stills probably had the LUCKIEST circus catch of the 2017 season this past week. Having said that, Stills still hauled in six catches for 85 yards and two TDs, one each from a different Dolphins quarterback on Sunday. The question is, “Can Stills keep up this level of production once DeVante Parker returns to the Dolphins' lineup?” Fantasy owners will have to make a quick decision because the Fins will play Thursday night at the Ravens. The bottom line is this: If you need a wide receiver this week, you should add Stills if you miss out on Ginn.

Once again, the tight end position is a BLACK HOLE for fantasy football owners. The pool of healthy TEs is as shallow as a kiddie pool, so if you don’t have one of the top three or four players, the pickings are very slim. But the Tyler Eifert injury offers a ray of hope for the shrewd fantasy owner who is willing to roll the dice on Bengals tight end Tyler Kroft. If you get a touchdown from a tight end, you are usually pretty happy. Kroft has been targeted at least four times in each of the Bengals' past three games, producing three touchdowns. If you have a floundering tight end, give Kroft a shot on your fantasy roster.