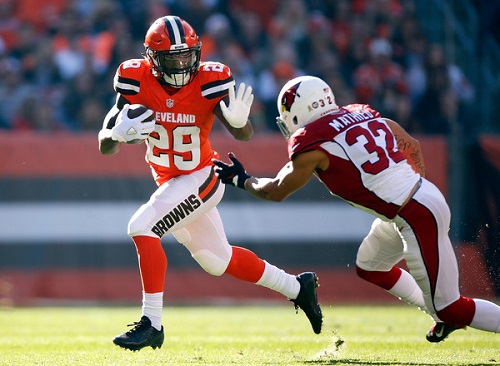 Without David Johnson, the Cardinals have discovered that they really have no choice but to throw the ball all day. They are averaging a pitiful 57 yards per game on the ground, worst in the NFL. On some Sundays, that one-dimensional approach is going to get Palmer and this offense in trouble. This Sunday, however, Palmer, who leads the league in passing attempts, should really enjoy hoisting up 45-plus throws yet again. The Eagles have given up five touchdowns and more than 700 yards to opposing QBs over their past two games. Eli Manning and Philip Rivers were those previous beneficiaries. Now, here comes another 30-something pocket passer with more than enough weapons at his disposal. Segue!

It seems like DraftKings is paying more attention to name value rather than actual numbers when pricing the Cardinals' wideouts for Week 5. John Brown costs $5,100. J.J. Nelson costs $4,900. And then there's Jaron Brown at $4,500. But when all three players were active last week, it was Jaron who played 95 percent of the offensive snaps, the same amount as Larry Fitzgerald. Meanwhile, John played 62 percent of the snaps and Nelson saw the field just 29 percent of the time. Jaron doesn't have the upside his cohorts possess, but what he does have is Palmer's attention. Jaron has been targeted 29 times over the past three weeks, including a dozen targets in Week 4 which he turned into eight catches for 105 yards. Jaron is turning into a high-floor commodity, especially in DraftKings' PPR scoring.

This one is too easy. I almost included Johnson in my Week 4 DFS Values column, but even after he posted his second consecutive game with at least 20 DraftKings points, he remains extremely affordable. Simply, Johnson has been the Browns' best receiver, period. He is Cleveland's leader in receptions, receiving yards and targets since Week 2. Good on the coaching staff for upping his touches total each week, and Johnson has hauled in 15 passes through his last two games. This weekend, he will face the Jets, who have allowed more than six receptions per game to running backs, ninth-most in the league. He won't get 20 touches, but the 10-12 times Johnson does get his hands on the rock should result in good things for his DraftKings owners. He is a PPR specialist who, for some reason, costs less than Derrick Henry, Alfred Morris and both Packers RBs not named Ty Montgomery.

Our Daniel Brown has already mentioned why AS-J is a worthy sleeper for season-long leagues this week. Excuse me for parroting, but yeah, the Browns are one of the worst teams at guarding tight ends. Luminaries such as Jesse James and Tyler Kroft have scored twice against them. Ben Watson put up 17.1 PPR points versus Cleveland in Week 2. There is sizeable risk here -- we're talking about trusting an aspect of the Jets' offense after all -- but for his price, Seferian-Jenkins is a stupendous value and will allow you to roster bankable studs elsewhere.