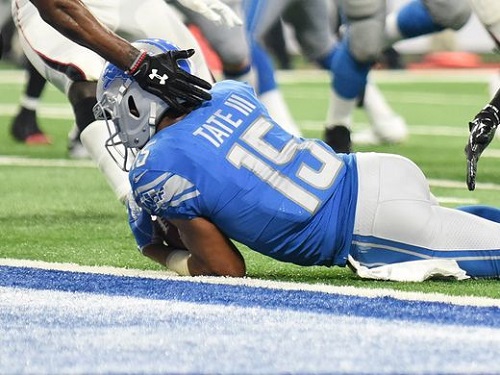 The Giants are 0-3 and for most of the season, their offense has been abhorrent. But Manning started to find his groove in Week 3, thanks in large part to wideouts Odell Beckham Jr. and Sterling Shepard. Yes, he still threw two interceptions, but Manning also piled up 366 yards and three scores. Manning's opponent in Week 4, the Buccaneers, has given up the second-most passing yards and the fifth-most fantasy points per game to quarterbacks. Their banged-up defense was just victimized by Case Keenum to the tune of 369 yards and three touchdowns. Manning has the matchup and the teammates in order to succeed this weekend. Plus, with Giants running backs Orleans Darkwa and Shane Vereen both dealing with injuries, you should expect a pass-heavy game plan from the G-Men.

I'll admit that Powell isn't going to reach my Bold Prediction outlook for him from the preseason, but he is in a good spot to see a solid amount of snaps and touches in Week 4. Although the matchup versus the Jaguars doesn't appear that great on paper, Derrick Henry and Alex Collins have averaged more than 6 yards per carry against the Jags, who have allowed an RB touchdown in each of the past two weeks. The real reason to like Powell this week, however, is his perceived opportunity. Matt Forte isn't expected to play due to turf toe, and the only other candidate for carries in the Jets' backfield right now is sixth-round rookie Elijah McGuire. Powell hasn't caught a pass since Week 1 for some reason, but be aware that he is a very serviceable receiver, which comes in handy with DraftKings' PPR scoring. Travaris Cadet is a legit passing-down player, but he was signed by the Jets just a couple of days ago and shouldn't be ready to chip in this weekend. Powell should receive at least 15 touches, including a handful of catches, versus Jacksonville.

Tate may not look like a value at that cost, but he really, really is. Priced outside of the top 10 at wide receiver, Tate will be on all of my DraftKings cards this weekend. We know how good Vikings cornerback Xavier Rhodes is, but past him, Minnesota's secondary has a lot of holes. As Tate lines up in the slot, he shouldn't see any of Rhodes, making this an A-plus matchup. Tate is a PPR dynamo who caught 10 passes last week and has possessed 21 of his 27 targets through three weeks. Also, you better believe Matthew Stafford will make it a priority to find Tate in the end zone to make up for last Sunday's controversially overturned last-second TD.

There aren't many advisable options below the top tiers at this position in Week 4, but Cook is someone to invest in, especially at his price. The Broncos expertly shut down wide receivers, but they can be exploited over the middle of the field. Denver has permitted the fifth-most fantasy points to tight ends this year. Cook, who has been the personification of inconsistency throughout his career, has seen at least five targets each week thus far. That should be his minimum in Week 4 as Aqib Talib, Chris Harris and others put the clamps on Oakland's wideouts. There's a good chance Cook will give you double-digit points in DraftKings contests Sunday.