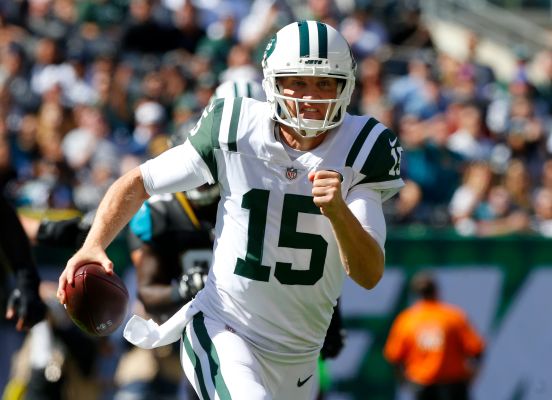 Below are this week's sleeper picks, and here are the sites that offer NFL betting odds.

For those new to this column, the following list assumes that waivers have run your league and that those picked up were possibly covered in an article from ASL's John Adams. We are here to look for more players who have a chance to contribute in this weekend's slate of games and could be good adds for the rest of the season. Before we begin though, this is probably your last chance to pick up Andrew Luck and stash him on your bench. He is still available in approximately one-third of ESPN leagues. If he is available in your league, stash him. He has the potential to be a high-end QB1, and we are only four games (five after this week) into the season. Grab him!

QB Josh McCown, New York Jets: Owned in just 2 percent of ESPN leagues, McCown and the Jets head to Cleveland this weekend in what many probably thought during the preseason would be a battle for the first overall draft pick. McCown hasn't exactly sparkled, but with Matt Ryan, Drew Brees, Kirk Cousins and Trevor Siemian all on bye, you may be in need of a QB streamer. After decent performances in the first two weeks against quarterbacks, the Browns currently rank 29th against that position and have given up 27 and 28 points to QBs over the past two weeks. If linebacker Jamie Collins misses his third straight game, you can expect McCown to take advantage and look to his new favorite tight end, Austin Seferian-Jenkins, a lot.

RB Wayne Gallman, New York Giants: He had 13 touches last week (11 rushes and two catches) and found the end zone on one of his catches. It appears he will be given the next opportunity to claim the Giants' starting job, and while the O-line has struggled to open holes, Gallman showed last week that he can move the ball as he averaged just under 4 yards per carry. He is in position to receive more carries this week with Paul Perkins injured and could be more heavily featured in the passing game if the Giants utilize the no-huddle offense during the game. With his role still a little uncertain, there may be better options out there for you. But if you are looking for a guy with opportunity and upside, Gallman is worth the risk.

RB Alfred Morris, Dallas Cowboys: IF you are struggling at running back and missed out on all of the RBs suggested by John Adams (see link above), consider Morris this week. He is a backup for the Cowboys. However, in a limited opportunity last week, he ripped off a 70-yard run and almost found the end zone. He is a "What the heck?" play this week and could run into real, weekly value if Ezekiel Elliott is ever suspended. If you are in a deeper league or one where people tend to start more than two RBs, Morris is certainly worthy of consideration. You could also consider Alex Collins of the Baltimore Ravens if he is still available. He will have more of an opportunity than Morris, but he may have been claimed via waivers this week or last.

WR John Brown, Arizona Cardinals: Brown was targeted seven times in his return to action in Week 4, and I expect that number to rise as he continues to work his way back to full strength. He is still available in 60 percent of leagues and will face an Eagles team this week that has given up the third-most points to opposing wideouts. In just the past two weeks, that defense has allowed 38 receptions and more than 500 yards to wide receivers. I expect that trend to continue this weekend, and John Brown could be the beneficiary of an increased target share, cashing in with a score or two.

WR Torrey Smith, Philadelphia Eagles: Smith has been underperforming so far this season. This week, the Eagles host the Arizona Cardinals, and I would expect him to see more targets this week due to the defensive back matchups expected for both Alshon Jeffery (likely Patrick Peterson) and Nelson Agholor (likely Tyrann Mathieu). Smith is still available in 87 percent of ESPN leagues and could be a sneaky start this weekend.

TE Austin Seferian-Jenkins, New York Jets: The Browns have permitted the second-most fantasy points of any team to the tight end position. In three of their first four matches, they have given up 22 or more points to tight ends! Look for McCown to exploit this weakness and target AS-J on Sunday. I wouldn't be surprised if he scores twice against the Browns.

TE Cameron Brate, Tampa Bay Buccaneers: Brate continues to produce for fantasy owners, and Jameis Winston continues to look to Brate in the red zone. He is owned in only 36.5 percent of ESPN leagues and has a great Week 5 matchup against a very disappointing New England defense that has allowed plenty of fantasy points to tight ends. Brate has caught four passes in each of his last two games and, more importantly, found the end zone in both. Brate is a great streaming option if you need one this weekend.

Have a question about a player? A start/sit question? Want to point out someone that you think was overlooked? Fire me your comments or questions on Twitter - @brownsnake76