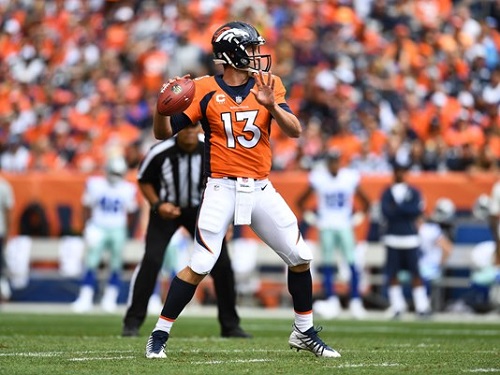 Below are this week's sleeper picks with a couple of bonus suggestions at the RB position, and here are the NFL betting picks for Week 4.

For those new to this column, the following list assumes that waivers have run your league and that those picked up were likely covered in an article from ASL's John Adams. We are here to look for more players who have a chance to contribute in this weekend's slate of games and could be good adds for the rest of the season. So here we go:

QB Trevor Siemian, Denver Broncos: Owned in 31.9 percent of ESPN leagues, Siemian has a great matchup this weekend against Oakland and is back at home, where he has been very good so far. He wasn't great last week against Buffalo in terms of his stat line, but the good news is that Oakland's defense was torched in Week 3 by Washington's Kirk Cousins, and the Broncos' advantageous defense could give Siemian some short fields to work with.

RB Chris Carson, Seattle Seahawks: He's still available in about one-third of ESPN leagues, which is surprising considering the amount of buzz and snaps he has been receiving. Carson has become Seattle's feature back and, this week, the Seahawks play against the Colts, who are vulnerable versus the run.

RB Javorius Allen, Baltimore Ravens: Like most of his teammates, Allen didn't have a day to remember in London against the Jaguars. It was actually Alex Collins who ran well late in that game and showed that he could be the future answer in Baltimore. However, the passing downs still belong to Allen and so for PPR purposes, he is still a solid play. That's especially true this week versus the Steelers, who have allowed 7.7 receptions per game to running backs, third-most in the league.

RB Alvin Kamara, New Orleans Saints: There's an ugly three-headed monster in New Orleans' backfield at the moment. However, Kamara is clearly their best option and it is only a matter of time before he takes over this ground game Just be patient. Kamara is an asset in PPR leagues as he has 10 receptions through three weeks. Think about adding him after the Saints' Week 5 bye. If you are carrying someone such as Chris Johnson or Theo Riddick or even Jacquizz Rodgers, who will lose value when Doug Martin returns from his suspension in Week 5, think about replacing those guys and betting on Kamara's upside.

Three other running backs to keep an eye on over the next couple of weeks include the Giants' Orleans Darkwa, the Jets' Elijah McGuire and the Eagles' Corey Clement. All of these guys are very speculative adds at this point, but they could become solid feature backs, worthwhile flex options or bye-week fill-ins later in the year.

WR Marqise Lee, Jacksonville Jaguars: I mentioned him a couple of weeks ago following Allen Robinson's injury, and Lee recorded double-digit fantasy points in PPR leagues in Weeks 2 and 3. Yet, he is owned in only 39.1 percent of ESPN leagues. Lee's teammate Allen Hurns may be slightly more valuable in standard leagues given his knack for scoring touchdowns, but Lee has seen 19 targets in Jacksonville's past two games, and the Jets have allowed the fifth-most fantasy points per game to wide receivers. Considering starting Lee right now, especially if you are thin at WR.

WR Mohamed Sanu, Atlanta Falcons: Available in a little more than half of all ESPN leagues, Sanu has had a pretty quiet season thus far, but he is the clear No. 2 wideout in a prolific passing offense. While Julio Jones continues to get targets and catches in bunches, Sanu has seen a respectable six targets each week. He scored his first touchdown of the year in Week 3 against Detroit and appears to be a safe flex option in PPR formats versus the Bills and a good hold for the rest of the season. We know Sanu won't see much coverage as long as Jones stays on the field with him.

TE Charles Clay, Buffalo Bills: The tight end position has been inconsistent in general this season (just look at what Travis Kelce did from Weeks 2 to 3). If you want a safe option, Clay has averaged six targets per game and has scored in two of the past three weeks. He should see plenty more targets this Sunday as the Falcons will probably force the Bills to throw more often than they would like. Clay slots in at No. 5 in this week's TE rankings by John Adams.

TE Jared Cook, Oakland Raiders: The Broncos are fantastic at shutting down wide receivers, but they can be beaten over the middle of the field. That's where Cook comes in, and he's available in almost 70 percent of ESPN leagues. For more on why Cook is a good play this week -- in both season-long and DFS lineups -- please read this.

TE Austin Seferian-Jenkins, New York Jets: Owned in just 1.1 percent of ESPN leagues, Seferian-Jenkins came off of his suspension in Week 3 and hauled in five passes for 31 yards against the Dolphins. Not a bad debut for PPR owners. Given the previously mentioned inconsistent play of the tight end position, AS-J is a decent flier for Week 4 versus the Jaguars, who have given up a touchdown to a tight end in each of their past two contests.

If you have thoughts or comments about the suggestions, please hit me up on Twitter - @brownsnake76