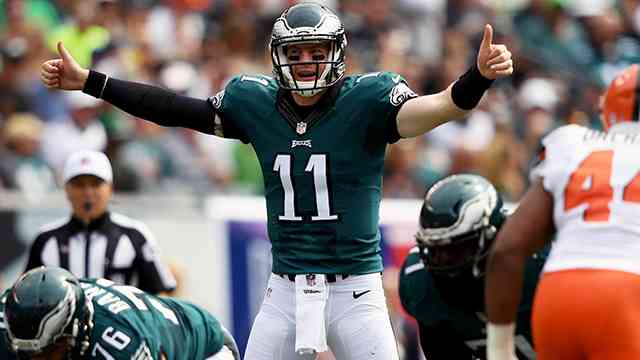 Below are this week's sleeper picks, and here are the betting odds offered by sportsbooks.

For those new to this column, the idea behind the following list is that waivers have probably run for your league, and those picked up would likely have been covered in our Tuesday newsletter via an article from ASL's John Adams. We are here to look for more players who might have a chance to contribute in this weekend's slate of games. So here we go:

Owned in 51.4 percent of ESPN leagues, there is a good chance Wentz is available on your waiver wire. He played well against the Chiefs in Week 2 as game flow forced the Eagles to throw a lot in the second half. If Philly could establish a running game, Wentz would be able to exploit defenses even more than he already has thus far this season. Considering how well be played against Kansas City, I expect he will have an easier time putting up fantasy points against the Giants. Even though they also have a good defense, New York's sputtering offense will give Wentz and the Eagles a few short fields.

If Wentz is unavailable, the Bengals' Andy Dalton is worth a look. He has struggled, but he gets to face a Green Bay defense that is susceptible to the deep ball. Plus, A.J. Green is ready to break loose.

Carson was a popular add by many and was referenced in John Adams' waiver wire column earlier this week. However, he is currently owned in only 21.7 percent of ESPN leagues and thus warrants inclusion on our list! Carson is a must-add if available as he is only going to get better with time. He does have a tough matchup in Tennessee this Sunday, but pick him up now before someone else in your league stashes him. I also think it's plausible to start him against Tennessee if you are thin at running back following the injuries to DeMarco Murray and Rob Kelley. Carson has some upside and could provide a decent return.

If Carson is not available in your league, consider the Patriots' Rex Burkhead, who is owned in less than half of all ESPN leagues. Or how about the Redskins' Samaje Perine? The rookie has averaged just 3.2 yards per carry, but he could find himself in a 20-carry role if Kelley's rib injury keeps him on the sideline versus the Raiders.

We talked about Allen last week and he delivered, especially in the PPR leagues where we thought he would shine. Somehow, he is still available in more than 75 percent of ESPN leagues. Regardless, he is a strong contender again this week, especially if Terrance West is unable to play due to his thigh issue. The Ravens fly to London to play the Jaguars in an early-morning kickoff Sunday. I expect Allen to continue to have a healthy role even if West is active. He is someone I would want for this week and for the long term.

When the season started, it was hard to imagine anyone from the Jets being fantasy-relevant with exception of Bilal Powell, who many thought would have a big season as a dual-threat running back. However, here we are in Week 3, Powell is an afterthought, Kearse has emerged as the Jets' main passing target and quarterback Josh McCown is doing a decent job of getting the ball to his receivers. Kearse is owned in only 19.7 percent of ESPN leagues even though he is the No. 5 wideout in standard fantasy leagues right now! The Jets should be able to move the ball between the 20s against Miami's defense this week, and I like Kearse to continue his hot start. He is a sneaky add for the rest of the season and now is the time to get him before another savvy owner scoops him up!

A starter last week, Higgins was able to have a very solid fantasy day, catching seven passes for 95 yards. He didn’t find the end zone, but he was productive with DeShone Kizer and showed great chemistry with backup QB Kevin Hogan, who stepped in for Kizer while the rookie was experiencing a migraine. Higgins lined up in the slot often and although that's usually where running back Duke Johnson does most of his work, the practice squad call-up has put forward a strong case to be Cleveland's permanent slot receiver. I like him more in PPR formats because I think he will see a good amount of volume, but I wouldn't argue with stashing him in standard leagues. It also doesn't hurt that Higgins will go up against the Colts in Week 3. Indianapolis has given up the second-most fantasy points per game to opposing wide receivers.

With Allen Robinson on IR, people whispered about Hurns being a worthwhile pickup last week and he responded with a stellar 6-82-1 line. Most of his production came in garbage time, but if you have followed the Jaguars in recent years, you know that garbage time is when this offense does its best work. Hurns is a boom-or-bust commodity, yet he has a good rapport with Blake Bortles and probably won't match up against an opponent's top corner as long as Marqise Lee is around. In the end, Hurns should have enough of an opportunity and could be a great addition for the rest of the season, especially during those bye weeks when you need a starter with big-play upside.

Ebron had a good outing against the Giants on Monday night, catching five passes for 42 yards and a score. This week, the Lions play the Falcons, who tend to find themselves in shootouts. Ebron tied for the team lead in targets in Week 2; perhaps he has found some connection with Matthew Stafford that will spill over into Week 3. With all of the injuries at the tight end position this week, you should think about streaming Ebron. Or maybe the next guy on our list ...

Cook, who is owned in 27 percent of ESPN leagues, recorded five catches and four catches in Weeks 1 and 2, respectively. Washington has permitted a league-high 104 yards per game to opposing tight ends thus far, so while Cook hasn't found the end zone yet, he is an attractive streaming candidate in Week 3. The TDs will come, and Cook is third on the Raiders in targets, behind only Amari Cooper and Michael Crabtree. Grab him now you need a TE immediately or are looking for depth at that position.