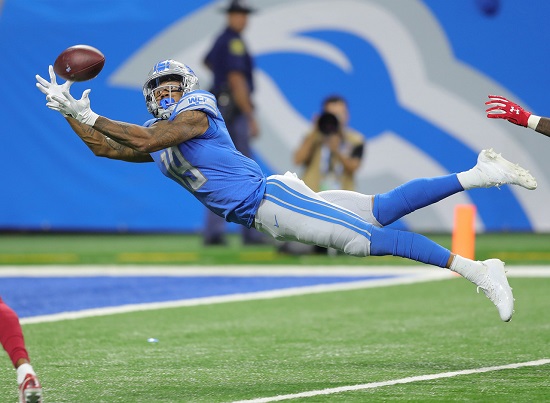 The idea behind the following list is that waivers have probably run for your league, and those picked up would likely have been covered in our Tuesday newsletter via an article from ASL's John Adams, Week 2 Waiver Wire Pickups. We are here to look for more players who might have a chance to contribute in this weekend's slate of games. So here we go:

QB Tyrod Taylor, Buffalo Bills - owned in 21.5 percent of leagues per ESPN, there is a pretty good chance that Taylor is available on your waiver wire. He played well against the Jets last week, throwing for 224 yards and two touchdowns. He also rushed for 38 yards. Against Carolina, he will be challenged by the Panthers' pass rush and the experience of their linebacking corps. However, Taylor has the ability to run and, when he is on his game, can be an effective passer. I don't think he will be in the top 10-15 QBs for fantasy purposes this week, but if you are struggling with options (maybe you have Andrew Luck and/or Scott Tolzien), then he could be a solid starting option with a decent floor and some potential for upside. Don't be surprised if he rushes for a TD this week!

RB Shane Vereen, New York Giants - Vereen is owned in only 28.5 percent of ESPN leagues. Last week against a good Dallas team, in a game that the Giants were never really in, Vereen appeared to establish himself as the passing-down back. Given how bad the Giants' offensive line looked last week, there is a very good chance they will play many games from behind and need to lean more on their aerial attack than the run game. With Odell Beckham Jr. still questionable this week, Vereen could have a decent role versus the Lions. He has PPR upside, but there is the risk of him posting a low number if the Giants are somehow able to keep it close and rely on their ground game. Still, Vereen is a sleeper this week if you are stuck.

RB Javorius Allen, Baltimore Ravens - In a strange Week 1 for the Ravens, Danny Woodhead left the game in the first quarter and the Ravens dominated a very average Cincinnati Bengals team. It's unlikely that the game flow will repeat itself this week, however, Allen did log 21 carries AND he is a great receiving option out of the backfield. Check-Down Joe, as Joe Flacco is affectionately named, will likely do that again against a Cleveland Browns' defense that performed admirably against the Steelers last week. Still, there should be opportunities for Allen, who is owned in only 4.5 percent of ESPN leagues. He could be a player with big upside this week if you need a running back.

WR Kenny Golladay, Detroit Lions - Matthew Stafford probably isn't going to throw four TD passes again … but he could. Such is the way the Lions plays, Stafford slings the ball all over the field and has the ability to make long passes that get his team from one 20 to the other in a hurry. He puts a lot of pressure on defensive backs, and with Golden Tate already established in Detroit, Kenny G's emergence during the preseason and then in Week 1 means that Detroit now has several options in the passing game. Last week, Golladay caught four passes for 69 yards and two scores. The Giants' defense is not very good and New York's offensive line is even worse, which should lead to some short fields for Detroit's offense. Golladay may not get two TDs again, but he has shown that he can catch whatever is thrown at him. In this matchup, he should have opportunities and that's all you are looking for!

WR Cooper Kupp, Los Angeles Rams - Kupp was a popular deep sleeper in drafts and even after posting a 4-76-1 line in a fantastic first game, he is still available in about 70 percent of ESPN leagues as of this writing. This week, the Rams will play at home against Washington, and I expect Sammy Watkins to draw Josh Norman in coverage. We'll see if Norman plays just one side of the field or follows Watkins, but either way, there should be opportunities again for Kupp, who looked in sync with quarterback Jared Goff last week. He is someone whom you should not only think about picking up this week due to his matchup but consider playing regularly during the season.

TE Charles Clay, Buffalo Bills - Clay has been a favorite target of Tyrod Taylor's since late last season. In Week 1, that connection was on display again as Clay recorded five catches for 53 yards and a touchdown. With Buffalo's lack of genuine WR threats, the Bills' offense is centered around their running game. Tyrod will scramble here and there to look for "safe" passes. He did this last week and I expect he will continue to do so this week as the Bills travel to Carolina. The Panthers' linebackers are good but allowed 49ers tight end George Kittle to catch five passes in Week 1. Sure, he gained just 27 yards, but I expect Clay will do more than that. Look for him to post a stat line similar to last week, which would be a solid return if you are seeking a one-week streamer or more!

TE Cameron Brate, Tampa Bay Buccaneers - The fantasy world seems to have forgotten about Brate, or perhaps they just think last season was a fluke. According to ESPN, Brate finished the 2016 season as fantasy's No. 6 TE. He scored eight times and was a consistent target for quarterback Jameis Winston. The additions of wideout DeSean Jackson and rookie tight end O.J. Howard appear to have contributed to the low expectations for Brate. That being said, I think Jackson's presence should create even more opportunities for the Bucs' tight ends. I also expect Howard to see fewer snaps and fewer routes than Brate, who is not as good of a blocker as the newbie. Tampa Bay's Week 2 opponent, the Chicago Bears, allowed a ton of yards last week to Falcons TE Austin Hooper. To be fair, most of those yards came on one big catch and run, resulting in an 88-yard TD. However, that reinforces how susceptible the Bears' defense can be if they are too focused on stopping wide receivers. And they should be very focused on Mike Evans. Brate is a solid streamer as well as a good season-long pickup if you have the bench space available.