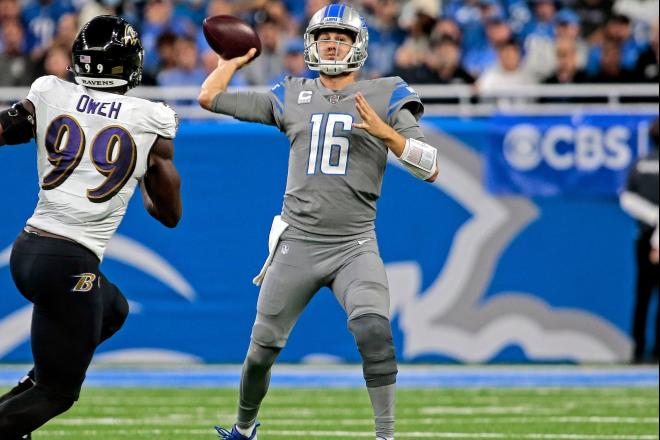 It’s a bitter sweet moment at this time of the season. Even if it’s been an abysmal year of football, fantasy football provides that extra spark we all need and now the season is coming to an end. True football fans see it's more than just a game, it’s a lifestyle. For those that don’t believe that I doubt you made it to the championship game this year. For those that did make it all the way, let’s finish out the year strong. I’ll do my best to help in this final week of starts and sits.

Jared Goff a league winner? Sounds weird, but it just might be true. Believe it or not, Goff is a top 10 QB this year. Now in a matchup with the Bears and the Playoffs on the line, put your faith in Goff this week. In his last five starts, Goff is averaging 304 yards per game. During that span he’s thrown 11 TDs and not a single interception. Goff has only thrown 1 interception in the last nine games. The consistency is there and it’s time to put your faith in a Lions QB to get you that championship.

It hasn’t been the year that most hoped for Akers as he’s not even owned in over 25% of leagues. If you have him, he should make your lineup this week. After having a career game againts the Broncos in which he ran for over 100 yards and 3 TDs, expect the same gameplay against a poor Chargers defense. The Chargers have allowed over 2,000 yards on the ground and have allowed a league high 5.4 yards per carry. Akers is getting his touches and now has 6 TDs in his last four games. He’s earned a spot back in lineups.

Jakobi is not that far away from being a prominent fantasy WR. The numbers will have to wait for next year but what he’s done this year is nothing to scoff at. In 8 out of 12 games this year, Myers has gone over 50 yards receiving. Now with the playoffs on the line, he has a favorable matchup against the Dolphins. The Dolphins secondary has allowed the 5th most air yards and have allowed QBs to have a 25:8 TD-Int ratio. Myers volume and matchup make him a lineup lock this week.

Every time I pick a TE, it feels like a roll of the dice. That’s just how inconsistent TEs are this year. One thing that has stayed fairly consistent is Kmet's targets. In six out of the last seven games, Kmet has seen at least five targets. That might not sound like a lot, but he’s used regularly every week and that’s enough to make lineups. The Lions also have one of the worst defenses so the middle of the field should be wide open for the young TE. Expect a good performance in this divisional matchup.

The Jags defense has found a spark near the end of this year. They have now hit double digit fantasy points three weeks in a row. I’m willing to bet they hit it for a 4th time against Houston. Last week the Jags only allowed the Jets to score 3 points. That is the 3rd time this year they have allowed 10 or fewer points. In Week 17 they are up against the worst offense in the league with the Texans. Jaguars should be at the top of anyone’s list looking for a defense.

It might be obvious by now to not have Wilson in your lineup. I mean they just fired a brand new coach and have scored the fewest points this season. With him still rostered in almost half of leagues, I still feel like he needs to make this list. After all he is up against the Chiefs who he just threw 3 TDs against just a few weeks ago. But if you take a step back you will see that’s the only time all season Russell has hit three touchdowns and only the second time he’s thrown more than one touchdown in a single game all season. With a TD-Int ratio of 12-9, Russell Wilson is easy to confuse with Patrick Ramsey. He’s looking like a bridge quarterback in madden franchise. Don't put the fate of your season in his hands.

Through the first three games of the season Patterson had 49 carries for 302 yards and 2 TDs. It’s sad to say since then Patterson has failed to surpass just 60 yards rushing. He’s up against a mediocre Cardinals defense but at this point it just doesn't make sense to start the veteran RB. Now coming off his worst performance of the season where he got just 17 yards it seems Cordarrelle Patterson seasons has fizzled out. He shouldn’t be in any lineups.

There was a time this season that Kirk was putting fantasy teams on his back. Overall it’s been a very solid year and he will finish as a top 20 WR this year. He shouldn’t be in your lineup in the championship though. He is up against the Texans who are bad at almost everything but defending the pass. They have allowed a league low 13 passing TDs and combine that with 12 Int. Trevor Lawrence and the Jags have been playing better but it just too risky to have Kirk in your lineup this week.

The TE position is so bad that back-up QB Taysom Hill is the 6th TE in fantasy this year and he only has 7 receptions this year. No matter where he’s ranked he shouldn’t be in lineups this week. Hill has been getting his points on the ground and now is playing the Eagles. The matchup is not in favor for Hill on the ground or the air as they have allowed the 8th fewest points to TEs this year. All signs point towards Hill sitting on the bench this week.

The Bills defense has undoubtedly been a huge help getting you to the championship game. They shouldn’t be starting in it though. It’s all about the matchups when it comes to defense. The Bills have only allowed 25 or more points three times this year. That was against the Vikings, Lions and Dolphins who are all high powered offenses. Now the Bills are playing a Bengals team who rank 7th in yards and 6th in scoring on the year. Don’t be cocky with your top defense in a tough matchup on the road. Keep them on the bench.