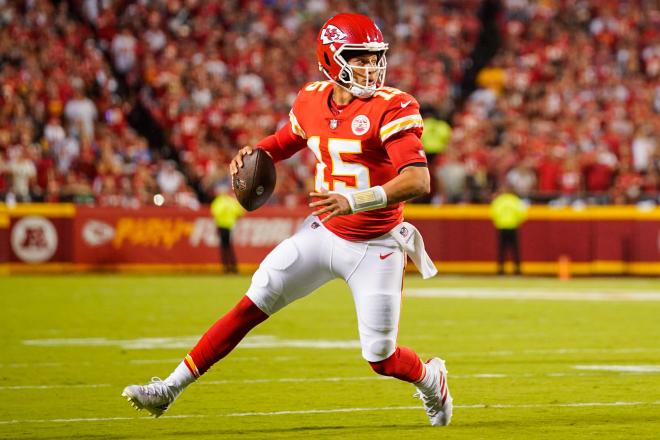 The NFL's Most Explosive Quarterbacks

The following chart plots the NFL's top quarterbacks' yards per catch versus the number of throws of 20 yards or more from Week 10: 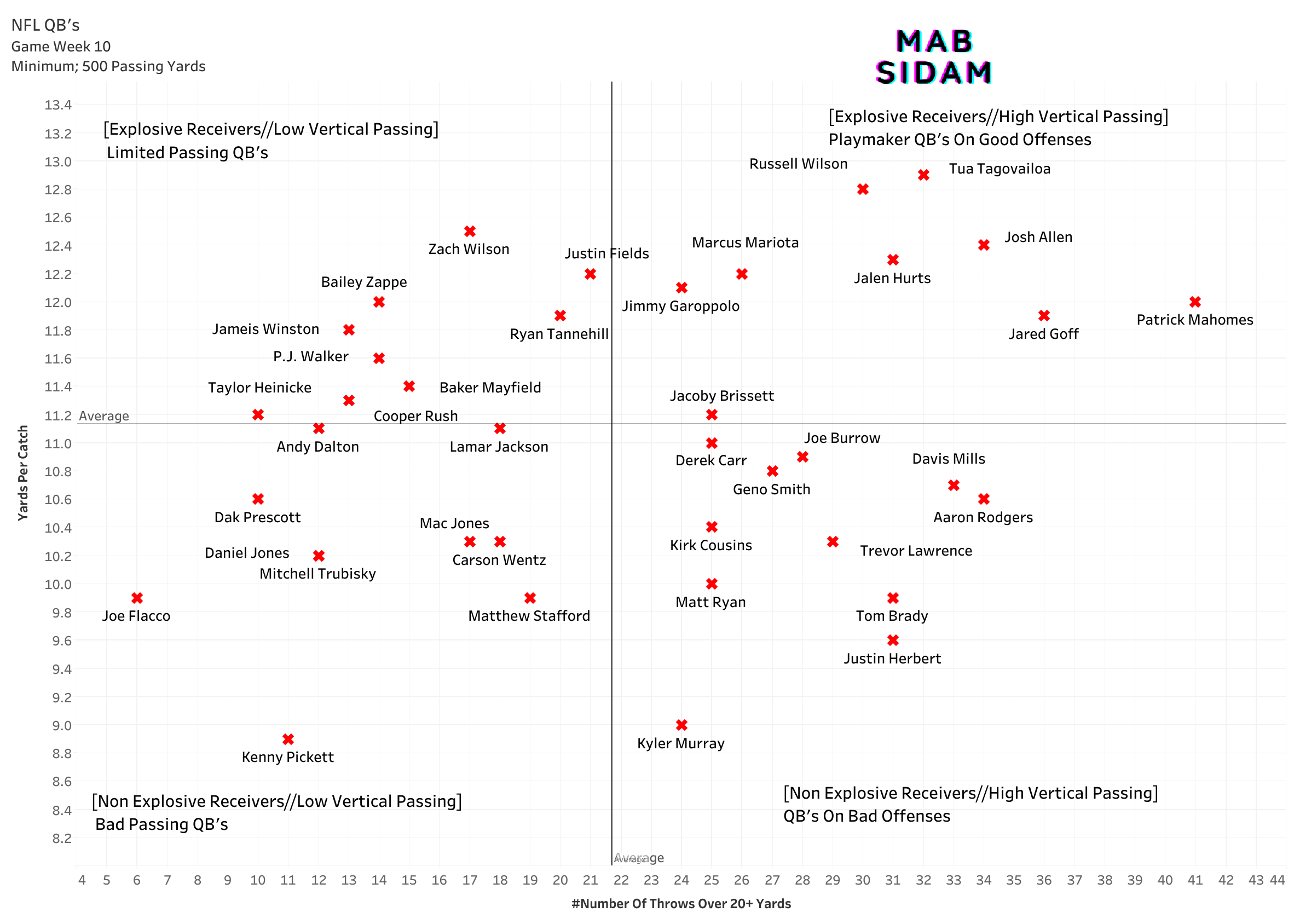 Playing quarterback in the NFL is one of the most difficult tasks in all of sports. NFL teams demand a QB makes all the plays and very few mistakes. A QB can receive help from receivers, the defense or the coaching staff but shouldn’t grow reliant and should be able to perform if all those pieces are absent. Making plays is the responsibility of the QB and this 2022 season here are the most explosive quarterbacks in the NFL.

The Kansas City Chiefs have spent the better part of the last five years as the NFL's most explosive offense. However, the departure of star wide receiver Tyreek Hill has forced head coach Andy Reid to reimagine the offense.

The departure of Hill has led to a changing ethos of Andy Reid's play-calling. Reid in the past ran a vertical-focused passing game that leaned into Mahomes' gunslinger mentality. The focus used to be explosive chunk plays down the field or hitting Travis Kelce in the space created when Hill rampaged down the pitch.

Kansas City has been more pragmatic this season. They are making use of Kelce, Moore and Smith-Schuster as possession receivers who take simple routes and use their Yards After Catch ability to push the Chiefs up the field. Mahomes also makes use of their running backs more. Clyde Edwards-Helaire, Jerick McKinnon and Isiah Pacheco have been chain movers for the franchise in the ground game. The Chiefs no longer get up the field in a hurry, but methodically move the ball as Mahomes makes use of all the weapons around him.

Goff’s numbers come with a huge asterisk. The Lions do have explosive receivers and running backs but the majority of their yards and scoring come while being down, chasing what usually turn out to be lost games.

Tagovailoa’s numbers also deserve an asterisk. A glance at the chart would make one think Tua Tagovailoa is an explosive thrower but the eye test shows a QB leaning heavily on the weapons around him to produce explosive play.

NFL scout Bucky Brooks has a quote on QB’s “they are either trucks or trailers.” Meaning they either pull the offense forward or are carried by it. Goff and Tagovailoa are arguably being carried.

Game Managers are the last of a dying breed. 20 years ago every franchise in the NFL wanted exactly what Goff is, a 6’5 accurate pocket passer. However, over the past two decades, NFL franchises have begun to favor athletic dual threat quarterbacks. The ability to score points through the air and on the ground has become more soughtafter than traditional QB traits. A traditional QB is a pocket passer with accuracy, complete field vision, and the ability to distribute the ball across the field. Goff and Tagovailoa are capable of all this, but the problem has always been consistency. In one game, they could play like Tom Brady and the next they have multiple turnovers.

Goff and Tagovailoa exists as a game manager, getting the ball into playmakers' hands and guiding the offense away from turnovers.

The modern dual threat QB is becoming all the rage in the modern NFL. This creates a mismatch advantage for the offense as they carry an extra runner in the backfield. NFL quarterbacks in this category are gifted. They have the potential to dart past the line of scrimmage like a star RB for a huge run or complete a gunslinger-type pass to make a play.

One of the best quarterbacks in the league today is Josh Allen of the Buffalo Bills. Allen is something of an anomaly in the NFL due to his developing accuracy in the pro league rather than in college. For years it was thought that accuracy can’t be taught, but Josh Allen appears to be an exception. He has jumped from a 56% completion percentage in his final year of college to 69% in his third year in the NFL. Allen makes great use of his natural gifts and the weapons around him to deliver one of the NFL’s most explosive passing games. Steffon Diggs dominates as a possession receiver while Gabriel Davis lurks ready to take the top off a defense. Josh Allen’s absurd arm talent is the foundation of this explosive offense unlike typical game managers who depend on the weapons around them.

Hurts is known for his dual threat ability, leadership and toughness. Hurts has a sturdy build to absorb contact plus quick feet in the pocket that allows him to escape pressure and dart up the field. He has demonstrated steady improvement as a passer since his college days. Hurts, like Allen, is seeking to buck the trend that accuracy can’t be taught. The Eagles provided Hurts with an effective run game and an explosive #1 receiver in A.J. Brown. The Eagles are making use of an overwhelming run threat to open up the passing game for their young QB. Hurts is surrounded by young dynamic receivers leading to an explosive passing game.

Marcus Mariota is having a redemption season. The former #2 overall pick had a troubling end to his time as a Tennessee Titan and spent time as a backup for the Raiders. The former Heismann winner has been famed for his ability to hurt a defense with both his arm and legs. The only question with Mariota is he can be turnover prone. The Falcons have surrounded the QB with dynamic talent that’s led to one of the NFL’s most explosive passing. Drake London and Kyle Pitts are great possession receivers who use their immense size and frame to make explosive plays for this offense while Olamide Zaccheaus is a threat to push the field vertically. All this paired with a menacing run game has the Atlanta Falcons as one of the NFL’s surprise offenses.

When the QB depends much on the pieces around him for success rather than by way of his own elite play the franchise enters playmaker purgatory. Late in games the team always seems in search of a playmaker to rise up and deliver on plays because the QB can't handle the burden.

Jimmy G as he is affectionately known by 49ers faithful reached QB purgatory two seasons ago, the 49ers openly tried to replace him but sadly that has not gone to plan. The 49ers find themselves in a difficult situation, the offense is explosive but that is due to the receivers, run game and coaching rather than the QB. Any time the franchise tries to place the burden in Garoppolo’s hands it usually ends in a turnover.

Russell Wilson recently arrived in Denver and has been missing some of the Wilson playmaker magic that made him so famous in Seattle. In many ways Wilson is the blueprint for the struggles many dual threat QB’s face once they lose their wheels. He has lost an entire side of his game and has to rework how he hurts defences. In Seattle Pete Carroll provided a stable run game and a host of receivers who meshed well with Wilson. However, early on in Denver the injury to exciting RB Javonte Williams has left the run game ineffective while Wilson has struggled to adapt his game to the new receivers he is paired up with. The passing offense remains explosive due to the presence of dynamic receivers such as Courtland Sutton and Jerry Jeudy but lacks a reliable possession receiver who can consistently move the chains. Late in games the Broncos search desperately for a playmaker to steady their offense, while Wilson, still adjusting to a new team, has struggled to fill this role. The team will continue to struggle until he rediscovers his playmaker magic.

A quarterback's ability to make success happen rather than simply manage a game has significant impact on the fortunes of their team. While individual players can make plays and carry the team, the tide rises and falls at the hands and feet of the quarterback more than from any other position group on an NFL team. Because of this, the quarterback is among the most glorified, scrutinized, and highest-paid positions in team sports.