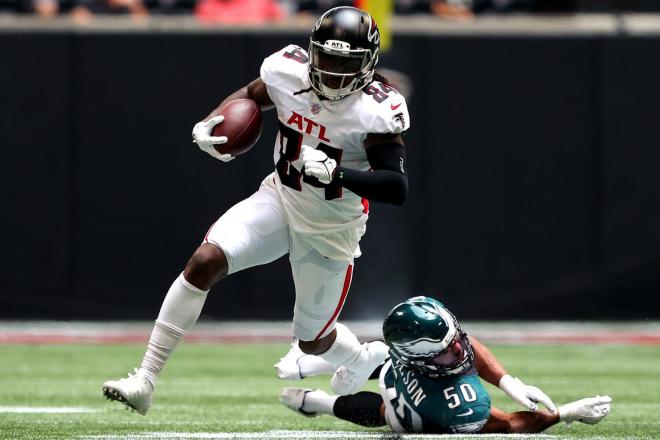 Time flies when you are having fun. Or when you are stressing over fantasy football. We are into the double digit weeks and the season is gonna come down to these last few weeks. If you are still reading these articles, that means you still have hope. Now let’s jump in the article and see who to start and sit for Week 10 of the NFL season.

Just like all the other weird things going on, the Bears are starting to click and Fields is a top 10 fantasy QB right now. He’s still owned in less than 50% of leagues so he’s likely to be first off the waiver against Detroit this week. Fields has only thrown over 200 yards once this year, but he’s run for 308 yards over the last 4 games. With the way he’s running the ball and against a bad Lions defense, he’s an absolute must start and could turn into a legit QB1 down the stretch.

Fresh off of injured reserve, Patterson wasted no time getting back into the swing of things with 2 TDs this past week against the Chargers. This week should look similar against a Panthers defense that’s given up 1,254 rushing yards and 12 rushing TDs only 9 games into the season. The Falcons do rotate their RBs, but Patterson will still be heavily involved. Make sure he’s in your lineup for a great matchup.

It’s a tough matchup on paper but Samuel should be in lineups, even more so in PPR. He quietly has had a very consistent year, having under 48 yards and 3 catches just twice all season. He’s now gone over 50 yards receiving in 4 of his last 5 games. With the Eagles putting up points at will every week, the Commanders will have to put the ball in the air. Samuel is a low end WR2 or a great flex play this week.

Fant is coming off his best week of the year with 5 catches for 96 yards. He’s matched up this week against Tampa who is in the bottom 10 of the league against TEs this season. Fant has had his share of bust games this season, but you'd be hard pressed to find a TE that hasn’t. With 23 targets in the last 5 games, Fant's involvement in the offense paired with the fact they they will have to keep pace with the Bucs makes Fant a lineup lock this week.

The Chiefs defense has had a quiet but solid year on defense and should be in your lineup this week against the Jags. They have only allowed over 30 points once this year and have been getting after the QB with 8 sacks in the last 2 games. They are playing Trevor Lawrence who has thrown for only 3 TDs in the last 5 games. Expect the Chiefs to pull away early and the Jags making mistakes trying to keep up.

Until Green Bay gets weapons, Rodgers should not be in lineups, and since the trade deadline is over Rodgers should be an after thought for fantasy this year. The future hall of famer has yet to surpass 300 yards this season and now has 16 or fewer fantasy points in every single game this year. Now he’s playing the Cowboys defense who is allowing just 5.5 yards per attempt and they have only allowed 8 passing TDs. Rodgers might be going to the hall of fame, but he’s also heading to fantasy irrelevance.

Rumors of Montgomery being traded was music to managers' ears, but nothing came to fruition. That being said, he belongs on your bench in the Windy City. They are playing an iffy Detroit defense but they just held Aaron Jones and AJ Dillon to under 40 yards rushing. Montgomery is still the RB1 in Chicago but even with his 15 plus touches a games he’s only surpassed 100 yards once this year and that was back in Week 2. He just doesn't belong in lineups right now even with a good matchup.

After torching the Commanders in Week 2, it’s been a pretty vanilla year for St. Brown. Through his first 2 games, St. Brown had 180 yards and 3 TDs. In is last 5 games combined he has 216 yards and no TDs. Seems like Detroit as a whole started off the season hot but burned out even quicker. The Bears have been solid in the secondary this season and have allowed only 200 yards through the air per game. St. Brown should not be in your lineup.

The TE position is so hectic. Multiple times this season you have a guy getting 20 points and then 2 points the following week. After shining Week 8, Gesicki had just 1 catch for 3 yards against Chicago. The one catch is very alarming since Tua Tagovailoa threw the ball 30 times in total. With the Dolphins also adding RB Jeff Wilson there are ample mouths to feed in Miami, and Gesicki is the odd man out. Find better options at TE this week.

After a dismal start to the year, the Seahawks defense has really batten down the hatches these past few games. That stops this week against Brady in Tampa. Seattle will be at the top of the waiver pickup this week because Tampa has been beatable. At the same time, Tom Brady is averaging over 300 yards in the air over his last 5 games. The running attack has been missing, but Seattle has allowed over 1,200 yards on the ground and 4.8 yards per carry. Don’t let this be a trap game for you and keep Seattle on the bench.