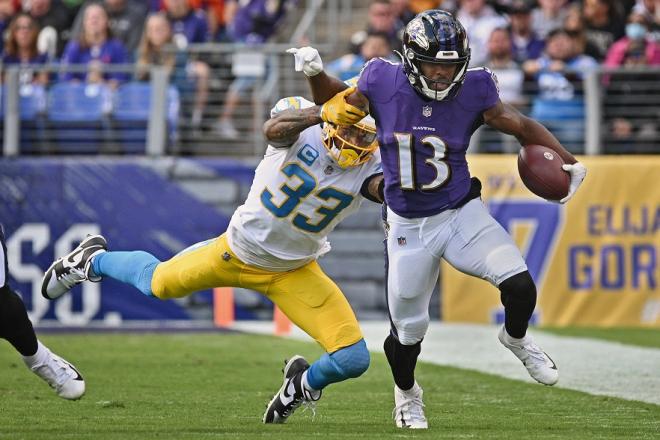 Working in tandem with Gus Edwards, Drake had 11 touches this week against Tampa Bay. Drake averaged a healthy 8.9 yards per carry and caught 4 of his 5 targets, one going for a touchdown. It appears that the Ravens do not want to put too much on Edwards, who is back after being out the last two seasons with ACL injuries. In an offense that is run heavy, Drake will seemingly receive 10+ touches a game, as he has each game since Week 6.

Pittsburgh is on a bye this week, but Jaylen Warren might be worth a stash spot on your roster. Najee Harris has been anything but impressive this year after being a top 5 pick in most formats. Warren is worth a spot if you have the room.

Recommended earlier this season, Duvernay has had a solid campaign. Now with Rashod Bateman slated to miss time with a foot injury, Duvernay becomes the go to guy for Lamar Jackson. Duvernay should be on the top of your list in all formats.

Since Week 4, Raymond has seen just shy of 6 targets per game. With Jared Goff having a resurgent year, Raymond is worth a roster spot if you need help at receiver.

Looking more like the first rounder the Giants took in 2017, Engram has had a solid season with Trevor Lawrence and the Jags offense looking more and more legit each week. Engram has had no less than 6 targets over the last 4 weeks and has been a consistent compliment to Christian Kirk.