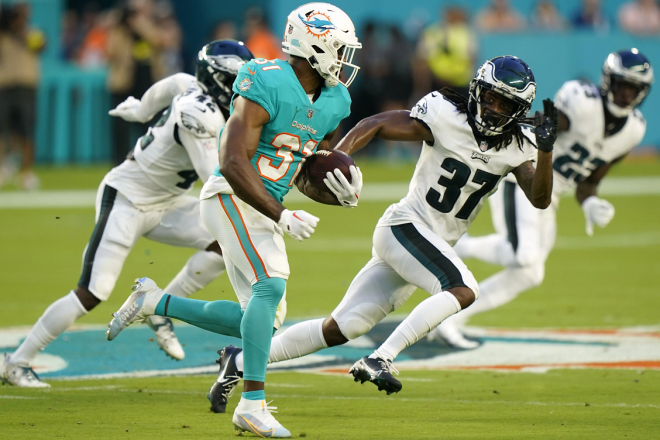 Panthers and Commanders beat Hall of Fame bound Quarterbacks in the same week. The feeling of, "What is going on right now?" is felt every Sunday thus far. Now halfway through the year, let’s set these lineups for your Week 8 matchup.

Everything else is weird so why not have Daniel Jones on the start list? Seriously though, he’s earned a spot in your lineup. After finishing last week with over 100 yards rushing he now has 343 rushing yards on the season, that's more than Najee Harris. He has also cut down on the turnovers with 0 INT his last four games. Jones has yet to throw for over 300 yards but right now he‘s a dual threat QB that deserves some attention. The Giants are on a hot streak and you should pick up Jones for a solid matchup against the Seahawks defenses

Veteran running back Mostert is coming off a game where he was a focal point in the offense, touching the ball a total of 20 times. Over the last four contests, Mostert has a total of 76 touches. He might not be a star RB, but that volume really forces him into your lineup. He is matched up this week against a pitiful Lions defense who has already given up 977 yards and 12 TDs on the ground this season. High volume and a good matchup; make sure Mostert is in your lineup this week.

I didn’t think Moore would make the list this year with how he’s played but just like all the other wild things this season here we are. Moore started the year off bad but apparently all he needed was P.J. Walker throwing him the ball. After 18 targets through the first three games, the season has taken a positive turn for Moore with now 36 targets in his last four contest. Now coming off his best game of the year against a top defense like the Buccaneers, Moore belongs in your lineup, mostly because of his matchup. He’s now slated to face the Falcons defense who’s allowing a ridiculous 306 passing yards per game which is by far worst in the league. The time to play Moore is now. He apologizes for the slow start but don’t kick yourself this week with him on your bench.

Picking a TE every week feels like grasping at straws. Other than the top guys it’s really a toss up every week. You know what I say though, chase the targets. After Albert O went down Dulcich has slid in nicely to the starting role. Now coming off a game where he matched Courtland Sutton in targets with 9, he gets a matchup against a subpar defense in Jacksonville. Expect the young tight end to build off his performance. Have him in your lineups this week.

The Titans have quietly played some great defense these past few weeks and now have a great opportunity to build on it with a matchup with the Texans. The Titans have only allowed 44 points in the last 3 games combined. During that span they also have 4 Int, 3 FF, 9 sacks and a TD. Now they go up against the Texans who have gained the 4th fewest yards this year. Make sure the Titans are locked into your lineup this week.

After setting the league on fire to start the season, the veteran Smith has cooled off a bit. In the past two games, Geno has combined for 407 passing yards and 2 TDs. That's just not QB1 caliber numbers. He’s now matched up against a surprisingly good Giants squad. The Giants defense is allowing just 211 passing yards per game. They have also allowed only 7 passing TDs this year. There are plenty of better options at QB this week.

Part of me feels like this doesn't need to be said and it’s an easy pick. At the same time Hunt is owned in 90% of leagues and still starting in lineups. Like I always say, target share and carries are what you should be worried about. In the last two games, Hunt has touched the ball a total of 10 times. Yes, it was against solid defenses but that doesn't change this week as the Bengals have allowed the 7th fewest points to opposing RBs this season. They have only allowed 3 rushing TDs this season. Hunt is a risk even as a Flex play. Put him on the bench.

If you have Lamb, you'll probably agree with this right away. Others might complain about benching a star wideout. Last week was primed up for Lamb to have a great game and he had 4 catches for 70 yards against a team who has been giving up points like Oprah. Now Lamb is up against Chicago, who has a bad offense but the defense has really stepped up this year. The Bears have allowed 178 passing yards a game this year and have only allowed 4 passing TDs. Lamb has had 5 or fewer catches in 3 straight games and hasn’t surpassed 100 yards all season. It might not feel right but CeeDee should be on your bench this week.

In all honesty, I put Pitts on this list during Sunday while the games were still on. I might be a little bias because I personally have Pitts but the benching is warranted. In six games played this season, Pitts has finished with less than 30 yards 5 times. Pitts is averaging less than 5 targets a game! Yes 5 targets, not catches. The Falcons spent a top pick on a guy just to be a decoy on their offense. It’s frustrating benching a guy with so much talent but it just doesn't feel safe to start him anymore.

The Broncos offense is terrible...but this is a trap game. The Jags might be at the top of the waiver wire but you should keep them there. After a hot start, the Jags defense has really mellowed out. In the last three games they have allowed 70 points. Along with that they have forced zero turnovers during that span and have only sacked the QB twice. The Broncos are playing bad but the Jags have shown no reason to be in lineups.