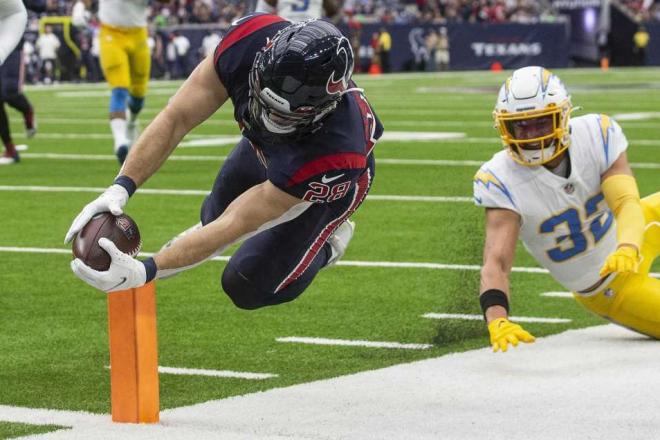 It’s your last chance to add someone who could make the difference in you winning a championship or winning your consolation bowl for a better draft pick next year! For most, this is the last week of fantasy football, so this is my last article of the season. For frequent readers, I hope I have been able to help you this season. For those of you checking in for the first time, please come back next season! Good luck to you all!

In one league I fell victim to Rex Burkhead and his huge day against the Chargers. With David Johnson out, Burkhead saw 22 of the Texans 36 rushing attempts… turning it into 149 yards and two touchdowns. Burkhead is a must add, and a flex with RB2 upside this week against the 49ers.

While I fell victim to Rex Burkhead, I also fell victim to the injury of James Robinson in the first quarter this past weekend against the Jets. His replacement, and only other healthy back at the time of this article, is Dare Ogunbowale. When Robinson went down, Ogunbowale saw all the volume, getting 18 touches for 72 yards and a touchdown. This pick up is strictly for owners of James Robinson who simply cannot replace him… the Jaguars head to New England this weekend… a tough matchup for any backfield.

Clyde Edwards-Helaire is expected to miss a matchup against the Bengals this weekend in Cincinnati, leaving Gore and Darrel Williams to lead the charge for the Chiefs backfield. Now when CEH missed time earlier this season, Williams was the go-to and put up pretty decent numbers. However, Gore is my favorite for production. He’s a flex/RB3 option with CEH out.

Now Hunter Renfrow is clearly Derek Carr’s #1 option at WR, however, Zay Jones has been making some noise over the last three weeks in the target department. Jones has seen 7-9-8 targets over his last 3 games, turning that into 5-6-6 receptions and 25-67-50 yard outings. Now… they aren’t the sexiest stat lines, but if you need a quick 10 points, look no further.

It’s no secret that the Seahawks have been struggling on offense… especially with all the talent they have on the outside. Two people who have been trending up have been Rashaad Penny and Gerald Everett. Everett has become a low end TE1 and has a great matchup this weekend against the Lions who are allowing the 6th most fantasy points to opposing tight ends this season.