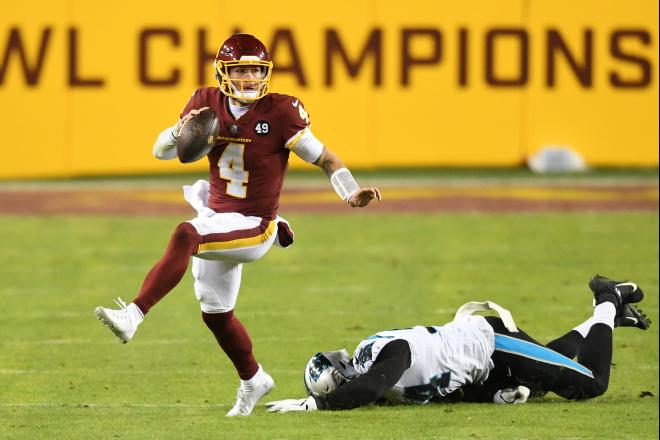 Hello fantasy football fan, this is your good pal Tyler, filling in for Chris Hexter. Normally, I’m telling you about the bumps and bruises for the week. But now, I’m here for the fun stuff; sharing more good news than bad. Without further ado here we go.

Last week, Heinicke made the sit list and then threw for 3 TDs with only 6 incompletions against one of the top defenses in the league. He’s only thrown 12 incompletions along with zero Interceptions the last two weeks and that’s while playing both the Panthers and Buccaneers defenses. Now, going up against what looks to be just a lost team with Seattle, lock Taylor into your lineup in a key matchup on Monday night with big playoff implications. Both his arm, legs and smart plays as of late has him as a must start against a middle of the road defense who let journeyman Colt McCoy have a career game last week.

It has been a rough year for Montgomery due to injuries and poor team play; even when healthy, he hasn't been a must start. That changes this week going up against a Lions defense that has already given up over 1,400 rushing yards this season. With Justin Fields nursing a rib injury, they will likely lean on Montgomery early and often. Look for him to feast on Thanksgiving, getting his 3rd 100 yard game of the season.

Moore hasn’t surpassed 100 yards receiving since Week 4 and has only scored 1 TD during that span. What he has going for him is his target share, he’s had a minimum of 7 targets every game this year. Now he’s facing off against a Miami team who has given up a whopping 48 catches over 20 yards which is worst in the league. They also lead the league in receiving yards given up by over 200 yards. With Cam Newton at the helm and the playoffs in sight, look for the Panthers to be more aggressive on offense and lean on their star receiver. Lock him in your lineup this week.

This year has truly been dismal for TEs outside of the top guys in the league. It just seems like every week the majority of TEs bust. This week is going to be different for Hooper. He’s playing against a solid Baltimore defense that isn’t so solid against TEs, giving up the 4th most fantasy points to the position this season. With Odell gone and Jarvis Landry still playing through his knee injury, Hooper will get his fair share of targets and has a strong possibility of having his best game of the year.

Yes, I know it’s the Houston defense, the same defense that gave up at least 21 points for the first 7 weeks of the season. That being said, they have been making plays on defense. They have forced 10 turnovers and 6 sacks over the last 2 games and now are going up against a poor Jets offense. Zach Wilson could be back this week but it doesn’t matter who is playing QB. They are missing their RB1 with Michael Carter out and that just makes this an even more favorable matchup. Start them!

Looking at it on paper, this looks like a solid matchup. Washington is without their two best pass rushers in Montez Sweat and Chase Young. They have also given up the most fantasy points to QBs in the entire league. On the other hand if you look at the past 2 weeks against Tom Brady and Cam Newton they have allowed just 204 passing yards per game along with a few interceptions. The Washington Football defense just seems different after the bye week and the same thing could be said for the poor play of Russell Wilson, who since 2 games back, has thrown for just 268 yards, no TDs and 2 Interceptions. Keep him on the bench this week at all cost.

There is an argument for Jacobs to make this list every week. But somehow he still finds his way into lineups. He has yet to surpass 100 rushing yards all season, to top that off, his season high is only 76 yards. He hasn’t scored a TD since week 7 and has only topped 10 carry’s once since Week 6. All this being said and the cherry on top is he’s playing a Dallas defense who has given up the 6th fewest rushing yards this season.

Yes, I know Thielen has a high target share and he’s coming off a big game. Yet, here I am telling you to keep him on your bench. Every time he has more than 80 yards receiving he’s failed to do it in back-to-back games. He’s been TD dependent all season and now is matched up with the the 49ers, who have given up the third fewest receiving touchdowns in the league. Keep him sidelined this week.

I mentioned how dismal it has been all season for TEs, so it’s almost easy pickings for this section because of the huge inconsistency at the season. I’m going with Jared Cook as a must bench. With a high powered offense in LA, Cook's target share has plummeted since the bye week with just 17 targets over the last 4 games. Then the cherry on top is the Broncos defense who has given up the second fewest fantasy points to TEs this season. With a stacked offense, the Chargers will game plan to exploit the Broncos defense in other ways. Stay away from Cook.

Yes, the Buccaneers have been solid all year and are a top 10 fantasy defense this season. I’m still telling you to stay far away. They are going up against the favorite for MVP in Jonathan Taylor and the Colts are going to run the ball down their throat. Antonio Gibson ran the ball 24 times for 2 TDs just 2 weeks ago against this unit. The Colts are going to show their hand early and look to dominate up front. This could turn into a high score matchup,  which makes for much better options on defense.