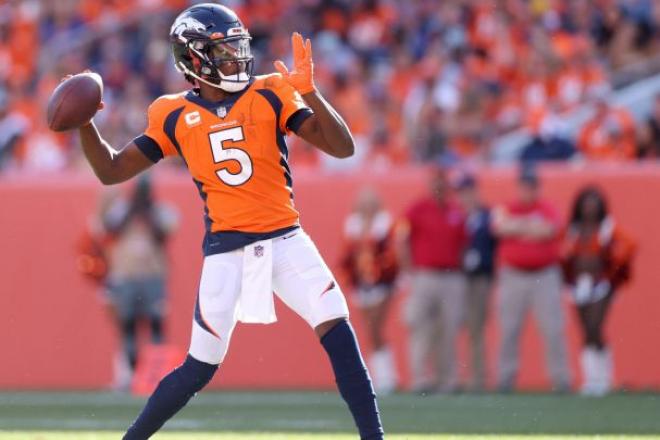 “Hold onto your butts,” as Samuel L Jackson once said in Jurassic Park because this is a rough week for streamers.

The Eagles have allowed a league high 75% completion percentage this season which fits into Teddy’s short accurate passing style.

Hot off the Jags second win of the season, Lawrence faces the Colts secondary who’s allowed 23 passing TDs this season, the most in the NFL by 3 TD. (Washington is 2nd with 20 followed by the Falcons, Browns, and Dolphins with 17 TDs.)

Led the Ravens RBs in snaps during Week 9 and has a TD in 3 of his last 4 games. Also the Dolphins allow 94 yards per game (13th worst).

The Steelers are surprisingly weaker against the run than one might expect, allowing 94.43 yards per game (12th worst). Williams should be fresh after their Week 9 bye after sitting out Week 8 with a thigh injury.

After Chase Edmonds’ ankle injury, Benjamin rushed 9 times for 39 yards and a score in Week 9. As the next man up in the backfield he could see an increased roll on passing downs or in garbage time against the Panthers. (Those 0%s aren’t typos, Benjamin is just not on seemingly any fantasy rosters at all.)

If Sammy Watkins is sidelined again on Thursday night then Bateman can be counted on for 5 or so targets in the Ravens slim passing attack. Plus the Dolphins have been dreadful against opposing WRs allowing 15 catches per game (4th worst) and 192 yard receiving (4th worst).

Moore might have started to figure things out over the last 3 weeks after seeing 6, 6, and 8 targets and catching 2 TDs in Week 9. But he faces a much tougher matchup against the Bills in Week 10.  You could be chasing points or buying into a mid-season rookie break out. This play might also depend on Mike White returning behind center.

When we last saw Gallup in Week 1 he was targeted 7 times. Call it a hunch but the Falcons have played a soft schedule so far. They assuredly have solid metrics against opposing WR but the Cowboys are more akin to the high octane Buccaneers, who grounded the Falcons with 5 receiving TDs. If Gallup returns he only needs one or two catches to return value with a big play or TD.

Caught 5 of 7 targets for the second week in a row and he will be facing a Chargers D that is surrendering 70.6 yards per game to TEs (2nd worst)

Seen 17 targets over the last 2 weeks and he draws a soft match up as the Colts are allowing 6.11 catches per game to TEs (6th worst)

The Titans have snagged an interception in 6 straight games as well as a -- albeit fluky -- defensive TDs in 3 of their past 5 games.

IF Russel Wilson doesn’t return then the Packers are worth firing up as they have held 3 of their last 4 opponents to under 14 points.

The Browns are starting to look strong. On defense they have recorded at least 2 sacks in all but 1 game and have held teams to 70.11 rushing yards per game (30th in the NFL).

Fully expect the Bucs to put up 100 points against Washington’s paper tiger defense. OK maybe not that many points but with a 51.5 O/U and a -9.5 spread the Bucs are projected to score 30 points making for plenty of extra point or field goal opportunities.

Has missed only 1 kick this season and connected on three 50-yarders.