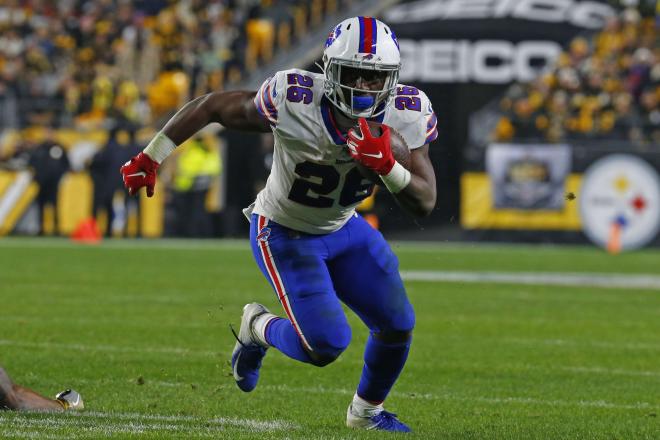 Defense wins championships, on any given Sunday. Two of the most used phrases in football, which most people don't believe anymore because of many high powered offenses in the NFL today. As mentioned in my article last week, defense is the reason I fell in love with the game. This week proved those two statements true once again. The Jacksonville Jaguars were 14.5 point underdogs against the Buffalo Bills. No one was giving the Jags a chance. They went on to win 9-6. Yes you read that correctly. The game felt like it was straight out of the 80s with both defenses just dominating with no offense to show the entire game. This is the type of game that should give you hope in Fantasy football. It’s getting late in the year but it’s still any given Sunday and you can still turn that season around! I’m rooting for you. I’m also here to help you sort out the injuries that occurred this past week, so here we go.

Figured I’d start the article with the best game of the week. Zack Moss exited the game with a head injury after not doing much in what was a positive matchup. Singletary was then the clear lead back and receiving back as he had a season high in both targets and receptions. It’s been a pure running back by committee in Buffalo and that’s why Singletary is only owned in 58% of leagues. That number will rise as the Bills have a tasty matchup against the Jets in Week 10. If Moss is out this week, Singletary is a solid RB2 with even higher upside in PPR leagues. Look for the Bills as a team to bounce back after an abysmal performance against the Jags, which could mean even more scoring from Singletary.

Speaking of running back by committee. The Cardinals lost their receiving back in Chase Edmonds with an ankle injury, which will most likely keep him out of next week's contest against the Panthers. Losing Edmonds sparked a fire under Conner as he had over 170 yards from scrimmage and a whopping three touchdowns. Conner has been somewhat of a risky play with the involvement of Edmonds in the passing game, but without Edmonds, Conner changes from a risky flex to a solid RB2 with massive upside. The Cardinals have a tough matchup against the Panthers defense, but Connor is a must play while Edmonds is out.

If there were not two injuries for the patriots on Sunday, they probably wouldn’t have made this article. That’s how much I don’t trust any running back in a New England Patriots uniform. The Patriots had three different running backs combine for 33 carries for 146 yards and a TD. With both Harris and Stevenson going down, Bolden finished the game with a season high 8 carries for 54 yards, also adding 2 catches for 27 yards. If both RBs miss this upcoming game against the Browns, then Bolden is a strong flex play but with very little curb appeal for future games unless Harris and Stevenson miss multiple weeks. If you need a flex for this week though, Bolden is a great choice.