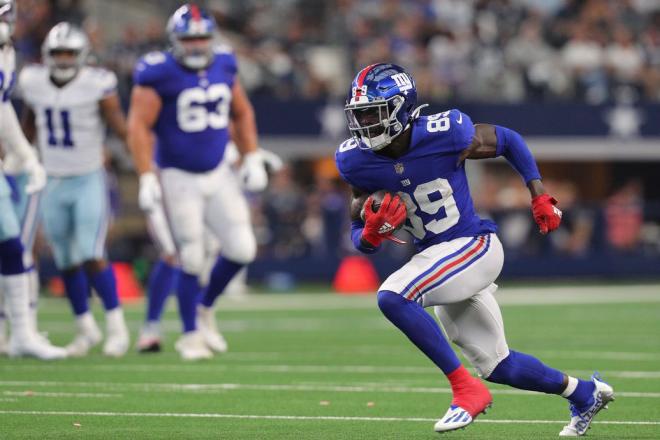 Week 6 is here everyone. It is time to look at your league, find the 0-5 and 1-4 teams and start making some trades.

This was a tough week for fantasy owners with Saquon Barkley, Clyde Edwards-Helaire, and JuJu Smith-Schuster. I’d also like to extend my deepest condolences for owners who went to bed last night thinking they probably won their matchup and had to wake up to lines of 11-147-2 from Mark Andrews, 9-125-2 from Marquise Brown, and 442-4 and 62 from Lamar Jackson.

Here are 6 players to target heading into Week 6!

Two weeks ago I wrote about the need for having your starters “handcuff.” Sure, it could be looked at as a wasted roster spot, but when you invest in something it’s always good to have insurance. Saquon Barkley fantasy owners, past and present, are no strangers to his injury history. While Barkley is seemingly only going to miss 1-2 weeks, owners still need to find a way to replace him in their lineups. Devontae Booker took over for Barkley against the Cowboys and found the end zone twice, once on the ground and once through the air. Booker is a seemingly great option to fill in for Barkley… and to be quite honest, I’m not sure how much of a difference owners will see in output.

Clyde Edwards-Helaire has probably driven you mad if you took him in the first or second round this year. Much like Saquon Barkley, owners expected a little more out of what was probably their first RB taken. Edwards-Helaire had strung a couple decent games together prior to going down this past Sunday against the Bills. Williams has been in the Chiefs system for years now and will most likely be who Andy Reid turns to going forward until CEH is back in the fold.

While everyone expected Damien Williams to handle the majority of the work for the Bears, the 6th round pick Khalil Herbert actually matched Williams touches. Herbert racked up 75 yards on 18 carries and had a slight edge in YPC over Williams. While Williams did find the end zone and Herbert didn’t, it is worth noting that Herbert was given chances around the goal line and didn’t cash in, look for him to get more opportunities going forward.

While everyone else in the Giants locker room was injured this past week against the Cowboys, rookie Kadarius Toney arrived on the scene in a big way. Toney had 13(!!) targets this past week, catching 10 of them and turning it into 189 yards, barely missing a score by a yard or two. He also had a rushing and passing attempt in the game, so it looks like the Giants are wanting to get the ball in this kid's hands as often as possible. The eye test for me showed me that Toney is far and away the most dynamic weapon the Giants have had since Odell Beckham Jr.. It is worth noting that Toney could miss some time with a knee injury, monitor that situation, but still… go all in on this rising star.

Jared Goff has a new best friend, and his name is super cool to say. Amon-Ra St. Brown was a fourth round pick in the 2021 NFL draft and has emerged as a top option for the Lions. With 8 targets in each of his last two games, St. Brown has commanded over 21% of the target share this season… a number that is poised to increase as he develops more chemistry with Goff.

With two consecutive games with scores, Hunter Henry has established himself as the clear number 1 TE in New England over Jonnu Smith. Henry has received consistent targets this season with 5.2 targets per game, that number has increased to 6.3 over his last 3. With Mac Jones getting more and more comfortable as an NFL starter, look for Henry to continue his solid upward trend going forward.