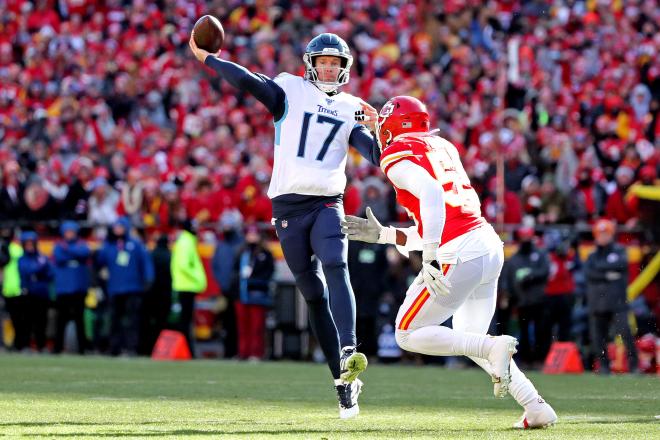 For a lot of us, Week 13 marks the last game of the regular season. For those of you battling to keep your playoff position or looking to propel yourself into that last spot, we got you covered. This is a big week for a lot of us, so without wasting more time, let's examine some hot starts and some not-so-hot players in Week 13's Starts & Sits.

Tannehill has been exactly what fantasy managers had hoped he'd be; he has been consistent throughout the year, even with some tough matchups, so Tannehill owners shouldn't complain about his play in 2020. Most of you either picked him up off waivers this year or drafted him late. Well, it's going to pay off as he faces a weak Cleveland secondary in Week 13. This should be a competitive game, so Tannehill should be leaned on. But, I'm also placing him in this column now because of his matchups going into the fantasy playoffs. Tannehill gets to face Jacksonville, Detroit and Green Bay in the weeks to follow. He shouldn't leave lineups for fantasy playoffs.

Montgomery finally broke out of his "RB2 Curse" last week as he lit up the Packers defense. Well, now he gets an even better matchup against the Detroit Lions who are struggling against opposing running backs. Montgomery is a borderline RB1 this week, but like Tannehill, Montgomery is on here because he too has a great fantasy playoff schedule. Montgomery faces Houston, Minnesota and Jacksonville. These are some of the best matchups a running back could possibly face and they come in the fantasy playoffs. Montgomery stays in lineups.

Chark has had an up and down season, struggled with injury and is now catching passes from his third quarterback of the year. So, there's risk with Chark, but not in a matchup against a secondary allowing the fourth most points to opposing wide outs. Glennon proved to be a more than capable signal caller and Chark is still a top athlete with a prominent role in the Jaguars offense. Chark also gets Tennessee next week in another positive matchup, but he faces Baltimore and Chicago in the fantasy playoffs, so if your trade deadline hasn't passed, by the end of the week, Chark could be a sell high candidate.

Waller's up and down season continued last week as he followed up his 7/88/1 stat line in Week 11 with a 4/23/0 line last week against the Falcons. However, the Raiders offense didn't look right last week and now get to right their wrongs in a matchup with the Jets. Waller now benefits from a defense allowing the third-most points per game to tight ends and allowed two scores to Miami tight ends just last week. Trust Waller this week.

The Seahawks had a strong fantasy outing last week against the Eagles and now get an even better matchup with the Giants. Colt McCoy will be the starter going into Seattle which makes Seattle a top five play this week. If you have the Seahawks defense, great, keep them around as the following weeks they get to face Sam Darnold and the New York Jets as well as Alex Smith and the Washington Football Team. Roll with this defense for a few more weeks!

The fun thing about Watson is that he provides immense upside. His play over the past couple weeks has been promising but two factors weigh significantly on Watson's upside. The first thing is, he faces a strong defense in the Indianapolis Colts. Usually, I would bet on Watson having a chance of coming out of this game with fantasy relevance, but Watson just lost his top wideout, Will Fuller V. Now, Watson only has Cooks as a serviceable fantasy option at wide receiver. The odds are heavily stacked against him and for some of us, it is hard to sit him. However, with fantasy playoffs looming, it may be best to start looking elsewhere.

Gurley has been mostly touchdown dependent in 2020, luckily, he has scored a lot. But this week, if he returns from injury, will be hard to trust on a snap count against one of the worst fantasy defenses for running backs. And if he doesn't go, don't go playing Brian Hill or Ito Smith. It's fantasy suicide. Avoid this backfield.

The Lions travel to Chicago in what will be a tough matchup for this receiving corps. Golladay has missed the past four games and looks to be out this week. Even if he plays, he will be severely limited and virtually unplayable with this matchup. That leaves Jones as the main target for Stafford. Sounds good at first, but Jones is touchdown dependent and without Golladay taking the best corner away, Jones will inherit that daunting task. They aren't worth the risk this week, so throw them both on the bench.

Detroit is good against tight ends despite their lack of play on virtually every other level on defense. But what hurts Graham the most is that Trubisky is behind center. Graham now becomes an even riskier play, and he was already touchdown dependent. Until Foles is in the lineup, Graham stays out of yours.

The one bright spot of this Eagles team is their defense. Their play for fantasy purposes has been promising. But in an important week, I don't see how fantasy managers can justify playing them in the second-worst matchup for fantasy defenses. Wentz is more than capable of turning the ball over and presenting the Packers offense with more than enough opportunity to score against the Eagles defense.