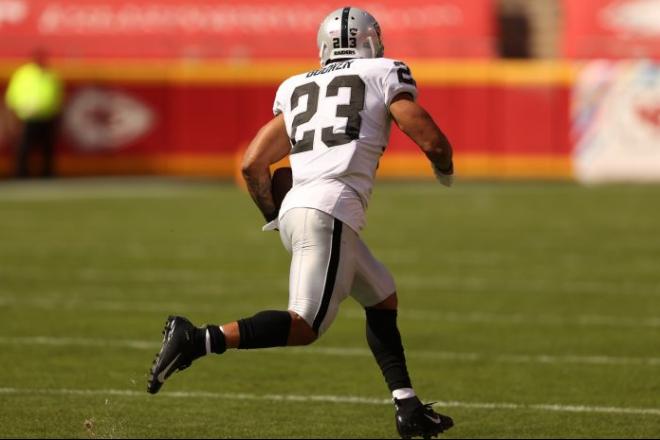 Another low-injury week is exactly what fantasy managers like to see when nearing the fantasy playoffs. But a suspension looms as fantasy managers prepare for the playoffs, with two players fantasy stocks shooting in opposite directions.

DJ Moore looked like he suffered a horrendous non-contact injury late in the game due to a poor throw from Bridgewater. How was the throw relevant? I'm a Panthers fan... I'm mad, okay? But really, Moore looks to be okay and fortunately gets a bye week so there is a chance he could be on the field in Week 14. Speaking of Bridgewater, it looked like his last pass of the game he injured his shoulder. We haven't heard much as of now, but with the Week 13 bye, unless it's a serious injury, which speculation is that it is a minor injury, then fantasy managers of both Moore and Bridgewater can enjoy a sigh of relief. But after next week, make sure to check their practice participation.

We can't excuse Jacobs and the Raiders poor performance on an ankle injury... right? No... no, we can't do that. What can we do? Well, we can watch Jacobs out there in Week 13 torch the Jets defense. It looks like he has a sprained ankle and reports are saying that there is a good chance he is out there. If not, Booker will see almost all of the touches from the backfield and with the Jets matchup, Booker makes a strong flex option. If Jacobs is a game-time decision but still plays, Booker is still a good play in deep leagues, as the Raiders are expected to be up and will limit the touches of their star running back. Monitor Jacobs' practice reps this week, but expectation is he will suit up.

Is there a mediocre news section here? I don't know what's more boring, being a Jones owner or watching me talk about how bad McCoy is of a play in fantasy. Jones will most likely miss a game with his hamstring injury, making McCoy the starter on an already weak offense. This hurts every skill position player on the Giants offense and makes them virtually unplayable.

Lindsay suffered a 'minor' knee injury. What does that mean? I don't know. I tweaked my knee getting the mail this morning and I almost called out of work. Am I of the same physical specimen of Lindsay? Eh... no. But anyways, Lindsay looked fine as he walked around the sideline, so he might have been ruled out because the Broncos game was already a lost cause. Unfortunately, Lindsay was finally getting the touches he deserved and now deals with yet another injury. If he can't go, Gordon becomes a safe RB2 in a tough matchup with the Chiefs. If Lindsay can go, he will be a very low-end flex due to matchup, a shared backfield, and he'll most likely be on a snap count to protect from reaggrevation. Either way, plan for Lindsay to be on your bench.

Fuller has been suspended for six games for violating the NFL's PED policy. This opens up the door for Brandin Cooks, who has been playing great football over the last few weeks. Cooks now will have a safer floor than ever this year following Fuller's suspension and still presents upside due to his speed. Volume alone should be enough to keep Cooks consistently in the WR2 range, even with tough matchups in the next couple weeks. This does, however, severely hurt Watson, who now loses yet another key weapon in this offense. The talent around Watson is thinning and his offensive line is not improving anytime soon. Now, entering/nearing the fantasy playoffs, Watson has to face Indianapolis twice and Chicago once in his next three games. I would trade away Watson while you still can as it will be tough sledding for the signal caller in the fantasy playoffs.