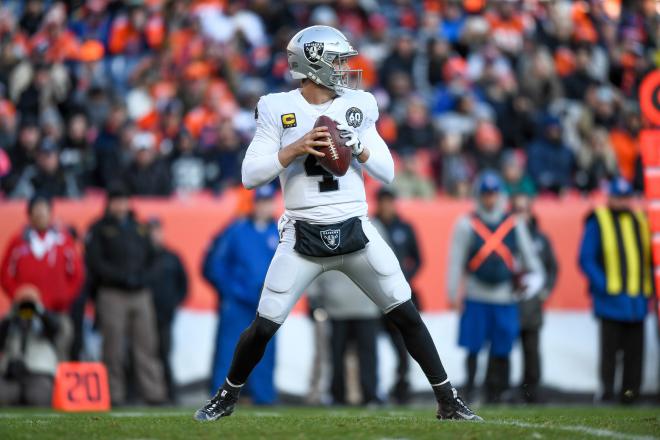 Injuries, bye weeks, COVID and weather form the four horseman of the 2020 fantasy season. We enter the depths of November, nearing December, and the cold, sometimes snowy and windy games begin to impact game scripts and player performance. It's another thing we as fantasy managers need to keep an eye on, this week, we may see a few rainy games but nothing too severe. But, in the weeks to come go online and check out weather reports for each game, trust me, it will help. But, as I said, this week we will see a few rainy games that won't largely impact performance, so with that, let's get into our 5 Stars & 5 Sits for Week 10.

Derek Carr has been great this season, not particularly for fantasy, but in terms of actual football. He's had a few low-yardage games but Carr has still thrown multiple touchdowns in six games so far this season. Although the dependency on the run caps Carr's upside, this week the Raiders will need to beat the Broncos where they're most vulnerable, through the air. The Broncos allow over 20 points on average to the quarterback position. Carr is a deeper, more risky play, but a good option this week nonetheless.

Gibson has been underutilized in this offense, and loses a majority of pass catching work to J.D. McKissic. The Redskins might not find themselves down too much in this game and should game plan to hit the Lions where it hurts the most. The Lions are the best matchup right now for opposing running backs, having allowed an average of 30 points a game. Gibson will be a borderline RB1 this week if given the opportunity.

The Browns are healthy and fresh off a bye, giving this offense more time to get the ball into the hands of their top receiver, Jarvis Landry. The Browns get to face a Houston defense who just let Jake Luton throw for 300 yards and a touchdown. With Chubb returning, defenses will remain focused on the backfield, leaving Jarvis to find plenty of running room against a weak secondary. It'll only take a few catches for Landry to return strong fantasy numbers against the Texans 27th ranked defense for opposing wideouts.

Wow, never thought I would have the opportunity to put Engram on this list. At first, it seemed as if this regime was perfectly intent on underutilizing the athletic tight end. However, the past three weeks Engram hasn't seen less than 9 targets a game. This volume is what we like to see for a tight end, especially in this tight end landscape. Volume considered, Engram now faces the fifth-worst defense against opposing tight ends. Engram is a fine play this week and should return low-end TE1 numbers.

Green Bay's defense steps it up when facing bad offenses, as we should expect. After facing a depleted 49ers offense last week, they get Jake Luton in his second start. Luton will make mistakes and the Packers pass-rush will get to see him plenty in what might be a one-sided affair. So, take the defense on the winning end.

Bridgewater has had an up and down fantasy season, throwing for multiple touchdowns in four out of nine games thus far. He is hard to trust and strictly matchup dependent. This is not one of those matchups and I believe the Tampa Bay defense takes out their frustration from last week's loss on Bridgewater this week. He's a sit this week.

Harris is banged up, Burkhead can not be trusted, and James White is not getting enough opportunity. The Patriots insist on using a committee backfield and against the best defense on a points per game basis in the Ravens, as Randy Jackson always says, "It's a no for me, dog."

When I was mentioning weather, I immediately thought of this game in Lambeau. It will be a cold, windy and rainy game and both defenses are really bad at one thing... the run. Both teams will make an obvious effort to make most of their headway on the ground. Leaving the pass-catchers with limited opportunity to make an impact for fantasy purposes (unless it's Devante Adams, always play Adams... okay? Okay.) Plus, the Packers are the seventh-best team against opposing wide receivers and Chark will be catching passes from a rookie in shaky weather. I know, I know, he had a good game last week... against one of the worst passing defenses in the league. If you have pivot options, take it.

You might be thinking, "Is this guy crazy?!" Yes, maybe a little. But not here. Andrews has been the epitome of Boom or Bust. You are either extremely happy with him, or extremely disappointed. And with that, there is no judgement on passing on a guy in an offense who is determined to run the ball in a matchup against the second-best defense against the position. I pray that I am wrong on this one, as most of us don't have strong pivot options, but we will not be pleased with Andrews in our lineups... again.

Seattle probably isn't too happy with their loss last week against the Bills, just a guess though. The Rams defense has been very good this year, but this week against a frustrated Russell Wilson and Chris Carson returning to the backfield, their are plenty options on the waiver wire for fantasy managers to stream. The Eagles, Packers, and the Saints are available in some leagues, but if you want to go deep, the Redskins and Raiders defenses should be good options in Week 10.