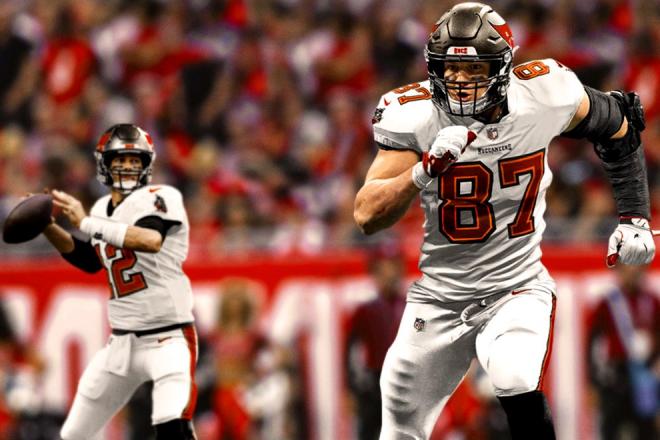 What We Learned From Week 7

Newton Fizzles...Again. Everyone cut Newton some slack after a poor performance against the rebuilding Broncos in week six coming off a bout with COVID-19.

As bad as he was against the Broncos, Newton was worse against the 49ers, going 9 for 15 for 98 yards and three picks. More alarming, he lacked velocity on his throws and his mobility was so-so.

Knowing Bill Belichick, Newton is on very thin ice. His next performance better be as good as the outfits he's been wearing. If it isn't, he could find himself on the bench or unemployment line.

Brady & the Bucs Gathering Steam. So much for the notion that TB12 is showing his age. All he did was throw for 369 yards and 4 touchdowns against the Raiders, whose defense isn't bad.

Moreover, he is now connecting on a regular basis with his former favorite target in New England, TE Rob Gronkowski.

And now he will have Antonio Brown to throw to along with Gronk, Chris Godwin and Mike Evans. Brady probably can't stop smiling. He's never had so many weapons at his disposal.

Chicago Story: Dynamic Defense, Offensive Offense. It doesn't seem to matter who plays QB for the Bears; neither Nick Foles or Mitchell Trubisky can put points on the board.

Little wonder, as neither pivot has had much time to set up and throw behind a porous O-line. Few quarterbacks can be productive when they're running for their life.

Add in some suspect play calling by Matt Nagy, and here's what you have: a team that's competent on only one side of the ball. If that remains the case, the Bears' playoff hopes could fade fast.

Never-Say-Die Cardinals a Plucky Bunch. For most of the game against Seattle, the Cardinals struggled on offense and their defense couldn't seem to stop Russell Wilson when it mattered.

But they hung in there. With a little luck and persistence - and some timely plays from QB Kyler Murray and RB Chase Edmonds - Arizona somehow prevailed 37-34.

Clearly, this is a team with talent and character (and a quiet leader in Muray) - a team that should only get better on both sides of the ball as the season progresses.

Wilson's Cooking Was Off Against the Cards. Don't look now, but Russell Wilson is human after all, as evidenced by his three interceptions in a gut-wrenching loss to Arizona.

Speaking plainly, Wilson was carrying the Seahawks on his back, his heroics disguising the fact that the 'Hawks beat-up defense just isn't getting the job done.

Now, with dynamic RB Chris Carson out of the line-up for up to a month and Carlos Hyde his only healthy running back, Russ will really have to cook to keep the Seahawks in the hunt.

Question is, can he can continue to play at such a high level? Tough call.

With third-stringer Ben DiNucci the last man standing at QB, Dallas is now in the market for another quarterback. Candidates include the Colts' Jacoby Brissett,  Green Bay's Tim Boyle and perhaps Colin Kaepernick.

Jerry Jones and Co. might also want to make some upgrades on defense and the O-line line while they're at it. Things have gone from bad to worse in the Big D, and don't figure to get much better.

Browns Better Without OBJ? Is it a coincidence that the Browns broke out on offense after Beckham was injured early in their back-and-forth tilt against the Bengals?

Everyone on offense seemed to play more freely, including QB Baker Mayfield, who spread the ball around and outdueled Bengals' QB Joe Burrow, the number one pick in the 2020 NFL Draft.

Only time will tell, but if Cleveland goes on a tear without the temperamental OBJ, his time in brown and orange could be coming to an end.

Giants Just Plain Bad? What can you say.

Another blown lead. Critical turnovers by QB Daniel Jones, yet again. Conversely, a great, game-sealing throw by Jones dropped by inconsistent TE Evan Engram in the latter stages of a winnable game against a mediocre Eagles squad.

At some point, the team's young prospects have to step up and win in the clutch. Will that happen this year? Doesn't look likely. Sorry, Giants fans!