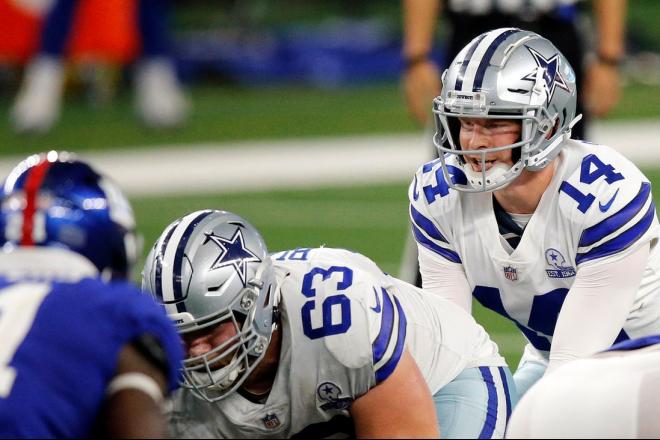 Week 5 of the NFL season is *almost* in the books. It’s time for all of you sitting at 0-5, 1-4, and 2-3 to start your run now. It isn’t over until the fat lady sings, and right now she’s just humming! Here are 5 players to target heading into Week 6.

With a tragic injury to Dak Prescott this past weekend, Andy Dalton steps into an interesting position as the Cowboys starter. It’s no secret that the Red Rifle won’t put up the same numbers as Prescott, who was on pace for an insane 6,760 yards and 48 total touchdowns, but this is by far the most talented group of skill position players that Dalton has ever had around him. Add him in every format, he could very well end the season as a top 10 QB from weeks 6-17.

The Packers are 4-0 this season and Aaron Rodgers is having an MVP caliber season. If you’ve watched any primetime games featuring the Packers this season you’ve probably heard the commentators talking about how Matt LaFleur has praised Jamaal Williams for making the biggest jump forward of anyone on the roster. That has been evident by the coaches commitment to get Williams more involved this season compared to last. Williams has a 42% snap share which is up from 34% last season, Aaron Jones currently leads the roster with a 55% share, down from 61.5% last season. With opportunities there, Williams is a great flex option!

Yes, I recommended Chase Claypool going into Week 3, but I’M DOING IT AGAIN! An injury to Diontae Johnson catapulted Claypool into a position to score 4 touchdowns against the Eagles… speaking of Diontae Johnson, someone tell Mike Tomlin to get that man off special teams! If it’s one thing the Steelers know how to do its draft receivers on day two and three of the draft and turn them into pro bowlers – see: Mike Wallace, Antonio Brown, Emmanuel Sanders, JuJu Smith-Schuster, Diontae Johnson, and James Washington.

Signed from the practice squad prior to Week 4, all Fulgham has done is catch 12 passes for 209 yards and 2 touchdowns in 2 games. With injuries plaguing Eagle’s pass catchers this year so far, someone must catch the ball! Fulgham is a must add in every format.

I can’t believe I am saying this, but if you absolutely need someone on your bench for some depth, Agholor is a good option. As a man who has struggled with drops his whole career, he currently has a 91% catch rate, granted he has only been targeted 11 times, but he’s turned those targets into 3 scores this season and has scored in consecutive games. Jon Gruden has not been afraid to air it out this season and pass catchers like Agholor and Henry Ruggs III have benefitted.

What rules is your league putting in place due to COVID? Let me know!