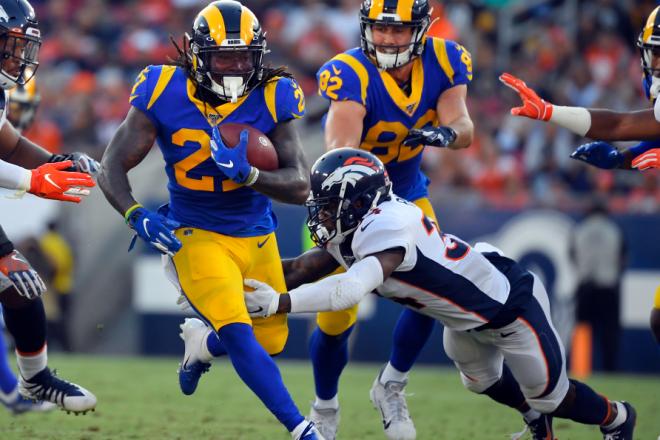 COVID19 has reached the NFL to which we all ask ourselves, “What do I do with my Titans/Steelers players?” Well, it looks like we will need to find some replacements from key starters such as Derrick Henry, James Conner and Juju Smith-Schuster.

Luckily, we have a fine group of players that you can bank on this week, so finding replacements may not be too daunting of a task.

Aaron Rodgers has been great so far and we can thank his matchups against weak defenses such as Detroit and Minnesota. Now, Rodgers gets Atlanta who is allowing opposing quarterbacks to put up an astonishing 32 fantasy points per game. Atlanta has a strong offense, so they should continue to push Rodgers to throw. Plus, Rodgers should get Devante Adams back, win-win-win! Rodgers can easily end up a top five quarterback this week.

Henderson has been amazing over the past two weeks, compiling at least 200 yards from scrimmage against two good run defenses in the Bills and Eagles. Henderson will still be the guy this week and he faces the Giants who have given up the 10th-most points to running backs this season. I expect the Rams to be up in this game, so we should see a lot of opportunity for Henderson. He is a good pivot for Derrick Henry or James Conner owners.

Parker has been decent so far this season, and those who drafted him in hopes to get 2019 Parker, now is your chance, Parker gets to face a secondary that has given up 45.7 fantasy points per game to opposing wideouts; that’s more than double the league average. Parker will get a heavy dose of targets in a game where the Dolphins will try to keep up with a strong Seattle offense. Parker has a very safe floor this week with top ten upside.

Honorable mention: Hunter Renfrow should see a considerable number of targets in a game where the Bills will force the Raiders to play catch up. If you need a JuJu Smith-Schuster, Corey Davis, or A.J. Brown pivot, Renfrow can be your guy. He is available in the majority of leagues and will be featured this week against the Bills. Renfrow is a solid flex play.

Waller always has the upside to be a top five tight end on any given week and last week’s poor performance shouldn’t deter any fantasy owners to bench/trade him away. Waller is averaging just over 9 targets a game and he will be the main beneficiary from the injuries of rookies Bryan Edwards and Henry Ruggs. Not to mention over the past two weeks the Bills have been exposed by opposing tight ends. Waller could return to top five numbers this week.

The Giants and their weak offense travel across the country to face Aaron Donald and Jalen Ramsey. An offense that has afforded opposing defenses an average of 12 points per game, the Rams may end up the number one defense of the week.

Wentz has been bad this year. Whether you think it’s his play, or a poor and injured supporting cast (maybe a little bit of both), Wentz is not someone you want to start right now, even in a good matchup. The San Francisco defense has been diminished due to injuries, but it doesn’t warrant enough confidence to start a fringe-top 20 quarterback. We’ll have to see it from Wentz before we trust him again.

Gibson has somewhat under-performed when you consider the hype he was receiving before the season started. Gibson is starting to see more usage than backfield mates McKissic and Barber, but it is still a three-headed attack on a less-than average offense. Now they face an angry defense coming off a loss to Mahomes, the Ravens will make this a statement game. Gibson will try to find room against the third best defense against opposing backs and it won't go well. Gibson should be on the bench this week and could be a buy-low candidate soon after.

Sammy Watkins has been a serviceable fantasy option two out of three games this season, but he tends to disappear. Against a good defense, I don’t see Watkins garnering enough targets to justify placing him in lineups. N’Keal Harry has seen some decent usage in year two thus far, but in Week 3 where he was third on the team in routes run, on a run-first offense, and this week he faces the best defense against opposing wideouts. I’ll stay away from these secondary, sometimes tertiary players.

Foles gives the Bears pass catchers a positive bump but for Graham, this week he’ll face the best defense against opposing tight ends, allowing only 32 yards to the position… on the season! Graham is being used and we like to see that, but his multi-touchdown performance is not something we will expect week-in and week-out.

Beating a dead horse here (who came up with that idiom??), but no matter how good a defense may be, you simply don’t start them against the Chiefs. I said it last week and I’ll say it again. Alright, fine. I will stop after this week, I promise. But the Patriots defense will get the Chiefs treatment and should end up on your bench.