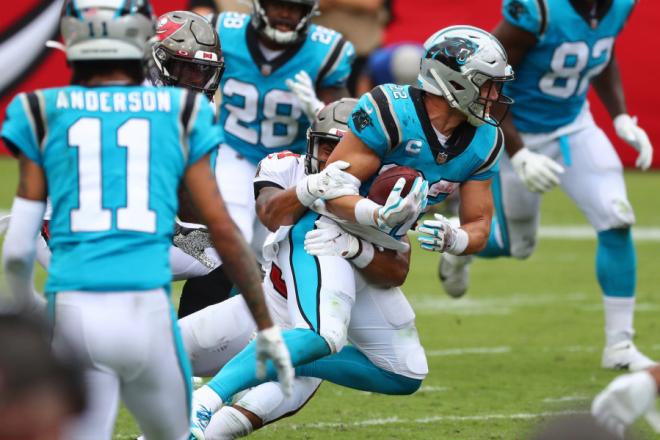 Well, in my 10+ years playing fantasy football I do not remember a day like Sunday. If you were able to get away from Week 2 unscathed consider yourself extremely lucky. Disaster started with Saquon Barkley and Christian McCaffrey, who both went down in Week 2. Barkley is done for the season after tearing his ACL; McCaffrey is expected to miss 4-6 weeks with an ankle injury. Other players done for the year Courtland Sutton and Parris Campbell. Players expected to miss time include Cam Akers, Tevin Coleman, Drew Lock, and Raheem Mostert. This is a critical time for in-season management, you need to keep your head above water here – start grabbing handcuffs, and let a little luck guide you through the rest of the season.

Don’t look now, but the Las Vegas Raiders are 2-0. Derek Carr is in his seventh season with the Raiders and his second with Head Coach John Gruden. Carr has always been up and down as a fantasy, and quite frankly, and NFL quarterback. He has shown flashes of greatness… and also some “what are you doing?” moments. Against the Saints on Monday night Carr looked poised and comfortable as the Raiders cruised to a 34-24 win in their new cities home opener. Carr is completing over 73% of his passes and has limited the turnovers – throwing no interceptions and losing one fumble in his first two games. If he is on your waiver wire he is worth a roster spot if he can continue this solid play.

This was probably what you were looking for when you clicked on this article – with a crazy week of injuries here are some immediate players to roster along with other backs to handcuff.

With Christian McCaffrey expected to miss 4-6 weeks with an ankle injury, Mike Davis is in line for an increased workload. Do not expect the same production from Davis as the man who was almost every single league's first overall pick this season, but he can keep you afloat – or serve as a nice trade asset, while McCaffrey is sidelined.

Teammate Dion Lewis might seem like the first choice here after Saquon Barkley’s season ended on Sunday with a torn ACL, but I believe Wayne Gallman will fill in for Barkley as he has when Barkley’s missed time in the past. Lewis, a once great option as a patch-catching back in New England, has not had much fantasy relevance since then. Gallman got the start last year in Week 4 after Barkley was hurt and posted over 100 all purpose yards and two touchdowns – that success would’ve seemingly continued, however, he was hurt early the following week and by the time he recovered Barkley was making his way back. Gallman is a talented back who could help salvage your season!

See above… I would personally have bids or claims in for both Lewis and Gallman, giving the edge to Gallman.


Honestly, prior to this season starting I did not anticipate the 49ers to keep McKinnon on the roster. McKinnon signed a pretty nice contract with the 49ers prior to the 2018 season but has spent the last two seasons on IR with knee injuries. With injuries to Raheem Mostert and Tevin Coleman the door is open for McKinnon to finally show why he was signed to such a sizeable contract in the first place. A bright spot here is that McKinnon, who was thought to have lost a step, scampered for a 55-yard touchdown this past Sunday on a 3rd and 31. He finished with 77 yards on 3 carries.

I’ll be honest, this situation isn’t the greatest, but I’ll take any running back in an offense run by Kyle Shanahan. Wilson isn’t a top priority target, but if you have a spot for him he’s worth the upside potential.

If this week showed you anything it is to handcuff, handcuff, and handcuff your running backs. The lack of contact this off-season paired with no preseason could be rearing its ugly head going forward. Remember, this was only Week 2… it should be (sadly) anticipated that more players will go down in the coming weeks and it’s better to have peace of mind.

Rookie Chase Claypool has had a solid start to 2020 in an offense that has been impressive so far. Clearly behind Juju Smith-Schuster, Diontae Johnson, and James Washington, Claypool has still been able to provide a big play in both games. This past week he hooked up with Ben Roethlisberger for an 84-yard touchdown, furthering the trust between the rookie and the vet. Big Ben has made rookie WR’s look like all-pros before, Claypool could be next in line.

Remember, this is not the time to panic. No one wins the league on draft night, the league is won with in-season management. Hit the waivers hard this week and look into unloading some of your other blue-chip players to make up points at other positions. If you are looking for trade advice feel free to tweet me your questions -> @mik3szn.