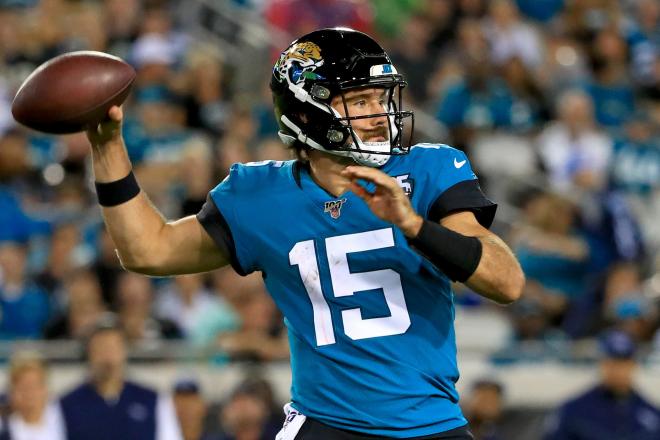 Finally, football is back, and that means so are my weekly waiver targets! For those of you looking for deep league targets, look no further. I suggest players based on previous weeks performance, next game outlook, and roster percentage based upon an average of the leagues I play in. Here are some players you should target in this week’s waiver wire. All points are based on ½ PPR.

Minshew Mania is back baby! After what many, including myself, thought to be a tanking season for the Jaguars in an effort to perhaps get Trevor Lawrence, the Jags shocked the league and took down the Colts. Minshew was 19/20 for 173 yards and 3 touchdowns and became the first QB in NFL history to throw for at least 3 TDs and complete 95% of his passes. Is this level sustainable? Probably not, but it’s cool, and fun, I mean look at the guy and that mustache, who wouldn’t want to be a part of that? All jokes aside Minshew did do this against a Colts defense who many expected to be a top 5 unit this season. Grab and stache (see what I did there).

I don’t think anyone knew exactly what to expect from the Rams backfield this year. McVay has been very coy as to say who has the edge, or who will see a bulk of the work, perhaps that's part of his genius. While rookie Cam Akers got the “start” this past Sunday against the Cowboys, it was Malcolm Brown who was the star. Running 18 times for 79 yards and 2 TDs while adding 3 receptions for 31 yards, he clearly was the main guy this week. I do anticipate Akers being more involved as we move through the season, remember, these teams did not have a preseason, so the learning curve for rookies might take a little longer. Anyone getting touches in a dynamic offense like Sean McVay’s is immediately worth a roster spot.

So, someone in my league cut AP after he was released by the Washington Football Team, then to my surprise no one picked him up on waivers after he signed in Detroit. I figured, why not, the guy is a HOFer, he was top 20 in attempts last season, and the running back situation in Detroit appeared to be a big question mark. I don’t think anyone anticipated that AP, signed exactly one week before the Lions first game, would carry the ball more times than Kerryon Johnson and rookie D’Andre Swift combined – and do well for that matter! I think it says a lot about how Matt Patricia feels about his running backs to see how much AP was involved in his first game. I can’t believe I’m saying this, but yes, grab the 35 year old future HOF’er – and if you need someone this week I’d consider him a mid-level flex play!

Generally, receivers are going to benefit from their QB completing 95% of his passes. But Keelan Cole has an opportunity here to be the clear cut #2 receiver in an offense that figures to be throwing the ball around a lot this season. The Jaguars might’ve won this week, but the odds are they’ll be playing from behind a lot this season. Dede Westbrook was a healthy scratch this past week against the Colts, leaving the door open for Cole to make an impression and he certainly took advantage, catching all 5 of his targets for 47 yards and a touchdown. He has a tough matchup this week against the Titans, but the schedules eases up in the weeks after against Miami, Cincinnati, and Houston.

Yes I know Matt Ryan threw the ball 54 times, but he also completed 9+ passes to three different receivers. Gage had 9 receptions on 12 targets for 114 yards. Don’t forget, when injuries plagued the Falcons receiving corps last year Gage stepped in and averaged 8 targets per game. If you know my articles, you know I LOVE targets. If you have the space, or can take advantage of these 3-week IR spots many leagues have added, throw Gage on the bench and see what happens over the next couple weeks.

Looks like Brady found himself a new Julian Edelman. Only falling behind Chris Godwin for targets this past Sunday against the Saints, Scotty Miller brought in 5 receptions for 73 yards. In a game where Brady seemed to struggle, he seemed to have a great chemistry already with the 2nd year pro out of Bowling Green. I am not a big Tom Brady guy this season fantasy-wise, but he’s turned short slot receivers from the MAC into Superbowl MVPs before…

Dallas Goedert – TE – PHI – should be on a roster if you’re in a deep/competitive league, if not, grab him!

Marquez Valdes-Scantling – WR – GB – if Aaron Rodgers is back to being a bad, bad man he is certainly worth a roster spot.

Benny Snell – RB – PIT – with uncertainty surrounding James Conner’s health, Snell is a great option to pick up and plug into any lineup – he’s also worth adding even if Conner is healthy due to his recent injury history.