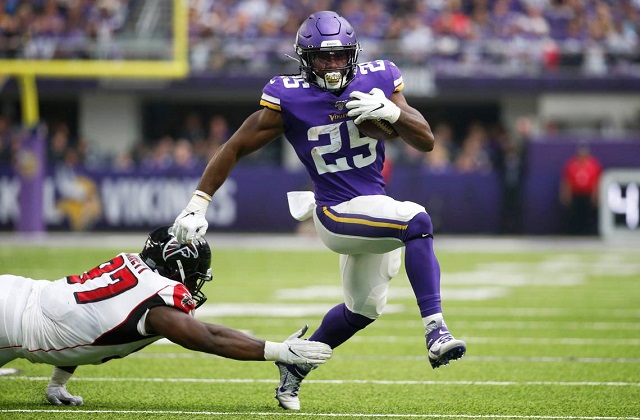 After 13 weeks of add/drops, smart and dumb start/sit decisions and sweating it out during Monday Night Football the fantasy playoffs have arrived. May the odds be ever in your favor.

-       Alexander Mattison, Vikings v. Lions … if Dalvin Cook’s injury keeps him out, the Boise State rookie might be your 2019 league winner. At a minimum he’ll be helpful in week 14 against Detroit who's giving up 26+ fantasy points per game to RBs

-       Raheem Mostert, 49ers @ Saints … with Matt Brida out Mostert showed his speed from his track days at Purdue. He earned his share of carries and more in week 14

-       Derrius Guice, Redskins @ Packers …  sure he’ll lose some carries to Adrian Peterson but this former LSU Tiger is the real #1 in Washington’s backfield

-       Darwin Thompson, Chiefs @ Patriots … with injuries nicking up the other KC RBs, Darwin is a boom-bust play. But at Utah State he proved he didn’t many touches to make a difference

-       Russell Gage, Falcons v. Panthers … If Julio Jones sits then Gage is an interesting play after hauling in 13 catches and 128 yards over there last two games

-       Anthony Miller, Bears v. Cowboys … the candidate for failed breakout of the year (yes, those are sour grapes) has totalled 271 years on 33 targets over the last 3 weeks

-       Darius Slayton, Giants @ Eagles … Slayton should add to his 232 yards and 20 catches over the last 3 games against a Philadelphia secondary that has allowed over a TD a game and 14.4 yards per catch to WRs. But pay attention to Golden Tate’s status

-       James Washington, Steelers @ Cardinals … Washington has snared a TD and gained at least 90 yards in 3 of Pittsburgh's last 4 games

-       Allen Lazard, Packers v. Redskins … another boom-bust play but the smooth route runner should be open deep at some point during the game

-       Tyler Higbee, Rams v. Seahawks … Definitely in play if Gerald Everett is out for a second week in a row

-       Jonnu Smith, Titans @ Raiders … Oakland gives up touchdowns and big-ish plays regularly to TEs and Tannehill has been averaging 2 TD throws a week since he became the starter