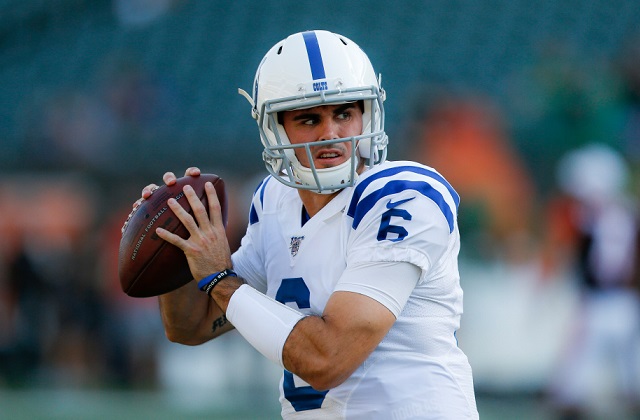 Brissett went down and Colts fans held their breath. But Hoyer came in and actually produced fairly good numbers (besides his pick-six). What this injury showed us is that not only will Mack continue to see a dominant workload, but the Colts will not shy away from the pass either. Doyle and Pascal looked like Hoyer’s favorite guys and simply from the small sample size, those two get a bump up (especially with T.Y. Hilton out). Hoyer gets Miami and becomes a nice play in two quarterback leagues. Pascal is the wideout you want in this offense and could be a nice DFS play. With Hoyer, I like Doyle as a TE2 with TE1 upside and Ebron remains a touchdown dependent TE2. Mack is a set-it-and-forget-it RB1. However, it looks like Brissett may play next week with a sprained MCL. Keep an eye on this.

Another week and Thielen lands on this list again after re-aggravating his hamstring injury, leaving fantasy owners with a big fat donut. He leaves an open door for a plethora of pass catchers. Diggs has the most upside but his owners would argue otherwise. He has not been consistent throughout the season. But we’ve witnessed his upside and with the target leader most likely out next week (and maybe longer), Diggs has to be in lineups. Don’t be fooled by Bisi Johnson’s touchdown last week, he saw only two targets and caught one for the four-yard score. He isn’t worth much more than a desperation flex play. Rudolph should get the biggest bump. He hasn’t had a great year as of late, but will benefit as the safety blanket for Cousins down the middle and on shorter routes. He could be a nice play next week against the Cowboy’s in DFS or deep league plug-and-play.

The team wasn’t aware of Bell’s knee issue until Monday after which they followed up with an MRI. As we await the results, Ty Montgomery becomes the number one waiver add this week and should be owned in all leagues, regardless of the results. Gase loves Montgomery and if he becomes the featured back, he has strong RB2 upside due to shear volume in both the passing and running game. Punish Bell owners who haven’t handcuffed with Montgomery, and claim him this week off waivers if you can. Obviously, watch this situation closely.  Need I remind owners that the Jets have the easiest upcoming fantasy schedule?

Preston Williams was looking more involved as the weeks piled up. After a breakout game where he caught five passes for seventy-two yards and a pair of scores, Williams left with a knee injury. News broke that he tore his ACL and will be out the rest of the season. Parker has been a nice WR2 with Fitzpatrick at the helm. With Williams out, Parker should be owned in the majority of leagues as he will continue to dominate the target share in Miami and should produce weekly WR2 numbers. If Parker is available, pick him up and confidently flex him, especially next week against Indianapolis (keep in mind his friendly playoff schedule too).

The Eagles will enjoy a bye this week so Jeffery should be good to go when they play the Patriots in Week 11. Jackson may have played his last game this year. It doesn’t look good for the field stretching wide receiver as he restarts the healing process for an abdomen injury that has already sidelined him 6-weeks earlier this year. Now, he undergoes surgery (about a 4-6 week recovery timetable).. Ertz is still a top option and should never be benched (except this week…). Sanders should continue his nice target share in the receiving game due to the limited amount of pass catchers on this Eagles offense.

Hockenson didn’t need to go through the concussion protocol after getting the wind knocked out of him, but was still listed to have a back issue. All signs point up for the rookie tight end playing. If he doesn’t play, Jones and Golladay will continue to play at a high-level, except with the absence of a big body, both receivers should see at least a few more targets in the redzone. Stafford has been red hot as of late so both should already be in your lineups, even in a tough matchup against the Bears.