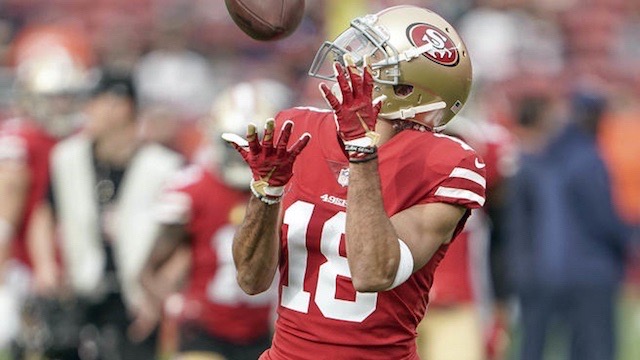 If he can stay healthy, San Francisco wide receiver Dante Pettis has the tools to become a top-15 fantasy wide receiver coming into the 2019 season. A series of injuries took a chunk out of his rookie season, but he was electric when he was on the field despite having to catch passes from three different quarterbacks. No matter who was throwing to him, Pettis proved himself to be a dynamic playmaker.

Pettis finished the 2018 season with 27 receptions for 467 yards averaging 17.3 yards per catch. Tack on five touchdown receptions for a player who missed all or most of seven games, and you have the potential for a breakout candidate coming into 2019.

Another rookie coming off a promising rookie season is Bears wide receiver Anthony Miller. Unfortunately, he will undergo shoulder surgery during the offseason, but providing the procedure is a success, Miller is poised to be one of the breakout wide receivers coming into next season.

His rookie campaign was up and down and it took him a while to find his footing, but hauling in seven touchdown passes is exactly why the Bears traded up with New England to grab him with their 51st overall pick.

Miller finished his rookie year with 33 receptions on 54 targets for 423 receiving yards. His numbers fell off towards the end of the season as the Bears shifted their offense towards the running game, but that doesn’t take away from Miller’s success during the middle part of the schedule. Miller will come into the new season hungry with one year of experience under his belt and should have an immediate impact for fantasy owners smart enough to grab him during the later rounds.

After missing the first month of the season with injury, Curtis Samuel came on like a hurricane for the Carolina Panthers. There was only one problem, head coach Ron Rivera missed a huge opportunity by not giving Samuel more playing time.

When Samuel was on the field, he delivered, whether it was on the ground or through the air. Three Carolina wide receivers caught more passes than Samuel’s 39 receptions, but he led the receiving squad with five touchdowns and tacked on two more on the ground. The fact that he can catch and run the football is something the Panthers need to take advantage of.

Samuel showcases his speed with elusiveness and provides a powerful two-headed monster for Carolina with fellow receiver D.J. Moore. If Samuel can continue his level of play from 2018 and Riverboat Ron gets him more involved in the offense, the sky is the limit for this third year receiver.