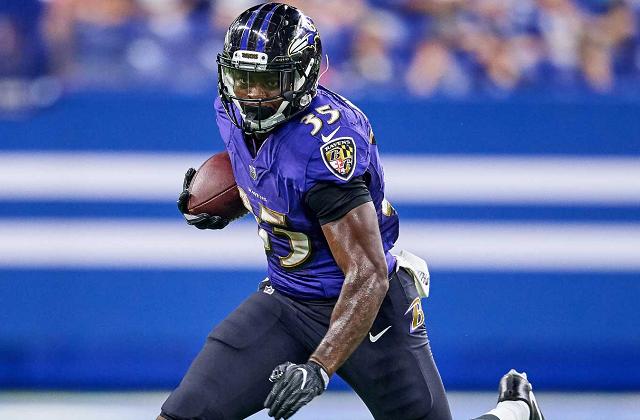 Two unlikely rookie running backs could play a major role in a run to a fantasy championship this season.

Let’s start with the undrafted Rutgers product, Gus Edwards. Edwards was signed right after the NFL draft only to be waived in September. He spent time on the practice squad before being promoted to the active roster during Week 6. Since Lamar Jackson has gotten his opportunity as a starter, Edwards has carried the ball 40 times for 233 yards. I’m no mathematician, but 5.8 yards per carry sounds pretty good.

Baltimore had problems moving the ball all season long before Edwards took over as the primary back for the Ravens rushing attack. Alex Collins could never quite break out. Edwards has thrived in his role as the primary back and it does not appear that he'll be giving back his job any time soon. Standing at 6’1 and weighing 230 pounds… this guy is a true three down back. The only, and I repeat, the only, downside to Edwards is his lack of targets. In six games played, he only has one target. Overall – I believe the volume of touches should make up for any shortcomings in the passing game.

I wrote about Josh Adams in my article last week about the Eagles and their struggles. I mentioned how the only bright spot in the team's loss to New Orleans was rookie running back Josh Adams. Since Jay Ajayi went down with a torn ACL, many thought duties would be handled by Corey Clement and Wendell Smallwood. However, neither player impressed with their opportunity. This led to more carries for Adams and he has proved worthy of the starting role in Philly.

Perhaps what I am most excited about with Adams is that Doug Pederson trusts him to make plays when they need it most. This past Sunday with their season on the line against the Giants, the Eagles found themselves trailing in the fourth quarter. Adams carried the ball 12 times in the fourth quarter alone – scoring a touchdown and adding a crucial 2-point conversion. Pederson told the media that Adams’ role would increase and he delivered. This is a late season gem that could make all the difference as you head to the fantasy playoffs.