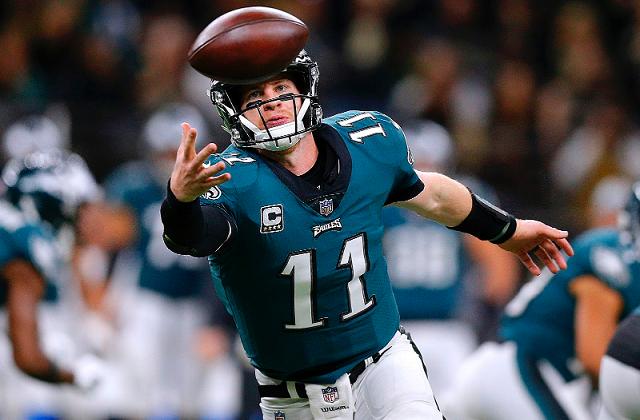 Carson Wentz, outside of this past Sunday, has put up almost the same – if not better numbers than last year. His QB rating as well as his TD and INT percentages are all relatively the same. He’s even throwing for more yards per game and completing his passes at a 69.5% clip, up 9.3% from the previous season. So what’s going on? How are the Eagles 3rd in their division heading into a stretch of three divisional games?

As you can see, last year's Eagles team was better across the board in pretty much every category. Additionally, Wentz was sacked only 28 times last season in 13 games, this year he’s already been sacked 26 times in just 8 games.

The RPO (Run-Pass Option) was groundbreaking last season for Philadelphia. The big problem this season is… they can’t run. With Jay Ajayi going down early in the season, Coach Pederson went to a running back by committee approach with Wendell Smallwood, Corey Clement, and Darren Sproles. This has been a headache for fantasy owners all season.

However, the lone bright spot in a 48-7 loss to the Saints was rookie Josh Adams. He only logged 7 carries – mostly due to the Eagles playing catch up – but he was able to take one of those 28 yards to the house. He also out-carried backfield mates Clement (2) and Smallwood (1). It appears that Adams has established himself as the lead back going forward.

The addition of Golden Tate has yet to result in anything for the Eagles and fantasy owners alike. Tate drew all of 12 targets during his first two games with the Eagles compared to a massive 12 targets he received during his last game with the Lions before being traded. Also a bad sign for Tate owners: Eagles offensive coordinator Mike Groh said it has been “challenging” integrating Tate into the offense.

Finally, this defense is just not the same as last year. This team forced 33 turnovers last year, averaging just over 2 per week. This season they are on pace to force just 18 turnovers, averaging just 1 per week. Also worth noting, last year the Eagles defense gave up a touchdown on 17% of drives compared to 26% this season.

Philadelphia still has a chance to turn this season around with three division games in a row. With home matchups against the struggling Giants and an Alex Smith-less Redskins, look for the Eagles to be right back in the mix before they face off in a pivotal matchup in Dallas on December 9th.