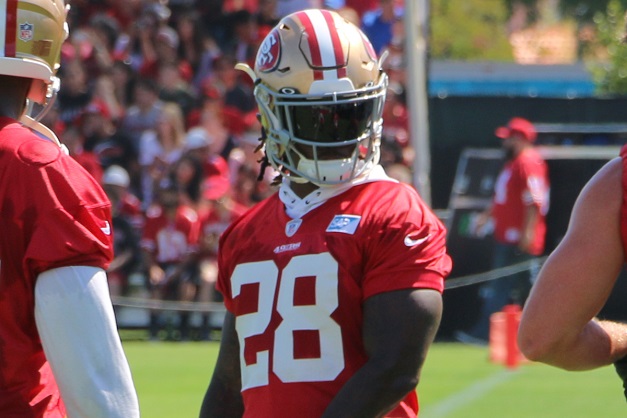 With each team's 53-man roster and 10-man practice squad near finalized, here are some notes from the past few days that I thought were worth mentioning as we sit just a couple of days away from the official start of the NFL season.

-- San Francisco 49ers running back Jerick McKinnon is now out for the season with a torn ACL in his right knee. That currently leaves preseason addition Alfred Morris, Matt Breida, who spelled Carlos Hyde at times last year, and special teamer Raheem Mostert on the 49ers' running back depth chart. I believe, unlike many others, that they will look to bring in other backs, although Morris has been successful in head coach Kyle Shanahan’s offense before. Back in 2012 and 2013, when Shanahan was the Redskins' offensive coordinator, Morris rushed for more than 1,600 and 1,200 yards, respectively. The 29-year-old may be hard-pressed to reach those numbers again. Breida knows the offense as well and is only 23. Both men have fantasy appeal though.

-- The Chicago Bears traded for DE/OLB Khalil Mack in exchange for draft picks. Mack goes from the Raiders' 4-3 defense to the Bears' 3-4 defense. Don’t worry about the scheme change; Mack is a beast and will excel. This is an instant upgrade to an already top-15 defense.

-- Also in Chicago, the Bears put TE Adam Shaheen on injured reserve. He is a candidate to return but will have to miss at least the first six games. Regardless, this sets TE Trey Burton up for a huge amount of volume in head coach Matt Nagy’s offense.

-- Sam Darnold was named the New York Jets' starting QB for week 1. Note the fact that during the preseason, he was targeting tight ends often. Because of this, do not sleep on deep sleeper TE Neal Sterling.

-- The New England Patriots released RB Mike Gillislee, who was then picked up by the New Orleans Saints). This solidifies Jeremy Hill as the Pats' No. 4 back. He could have some situational flex appeal this season.

-- The Dallas Cowboys released kicker Dan Bailey. It must have been about the money. He was probably drafted in most fantasy leagues, but don't panic yet if he's on your roster; he will be claimed soon enough.