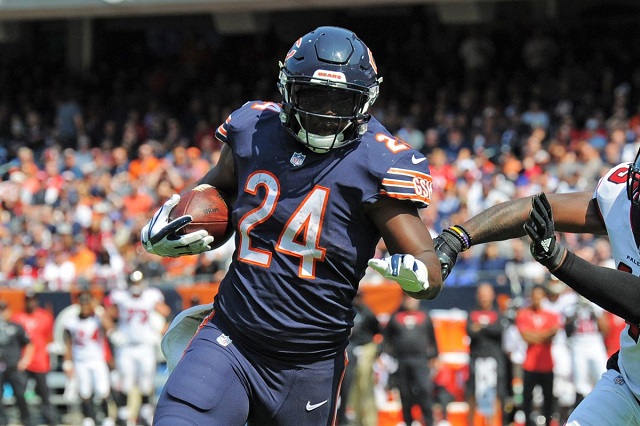 The Titans' official website wrote Wednesday that Davis "continues to impress, catching the ball with ease. He was money on grabs across the middle, hauling the ball in and then turning up the field. He looks confident, and plenty capable."

Fantasy Take: Don't overrate OTA reports. I don't think they mean much of anything. I've included this item just to talk about Davis, of whom I am a big fan heading into the 2018 season. His rookie season was interrupted multiple times by hamstring problems, but Davis posted a six-catch, 91-yard game in Week 16 and then followed that up with a two-touchdown outing against the Patriots in the playoffs a few weeks later. He'll vie for targets with Rishard Matthews and tight end Delanie Walker, but I don't think it's any big proclamation to say that Davis is the most talented player in Tennessee's receiving corps. The Titans' offense, which looked positively broken at times last year, should be repaired under new OC Matt LaFleur. I think Davis is a fine WR3 for 12-team leagues right now. His ceiling? It's hard to say in what should still be a run-centric offense, but a top-20 finish wouldn't shock me.

Doesn't sound like Bears will lean on RB Jordan Howard

Howard received 299 touches last year, but perhaps fantasy owners shouldn't expect a repeat under new head coach Matt Nagy. When asked this week about Howard's ability to be a workhorse back, Nagy said, "He’s proven that he’s done that, so that’s for sure. In this offense, it’s more game specific, as to whether or not you need that."

Fantasy Take: In other words, don't count on Howard getting that much work again. What's more intriguing to me is how Nagy will use Tarik Cohen in this offense, which has a lot of spread principles. I ranked Cohen 38th in my initial RB rankings, but I should probably move him up. Howard should still be a fine RB2. Just don't pay for 2017 stats.

Miami's wide receivers coach, Ben Johnson, said recently about Parker: "I don’t know if there’s many guys that have spent more time in the building than him ...." He added that the team is taking a "one-day-at-a-time mentality" with the fourth-year wideout.

Fantasy Take: Hype was heaped upon Parker before each of his first three seasons, but he brought back middling returns. It wasn't all his fault, obviously; the Dolphins are still trying to find their quarterback of the future. But there were also maturity concerns that Parker seems to be straightening now. He's just 25 years old and still possesses a ton of talent, so Parker is worth a dart throw as a WR4 in fantasy leagues.

Fantasy Take: It's a low-cost gamble for the Seahawks, who could certainly use more WR production past Doug Baldwin. Marshall admitted this week that he has a lot of catching up to do in order to get into football shape. His roster spot isn't guaranteed, and fantasy owners shouldn't be aiming to draft Marshall giving his age, mileage and recent injury history. Plus, it's not like the Seahawks are known for turning multiple wideouts into fantasy studs. Don't let the name value blind you during your drafts.