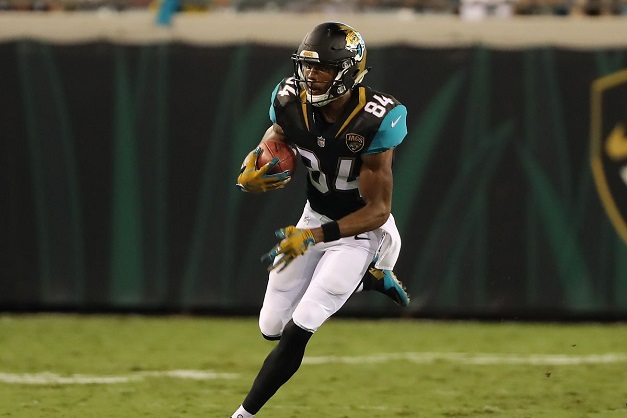 Here are this week's sleepers, via ASL's Brian Murphy. Who will be your unsung hero as you claim a fantasy football championship?

Presented in no particular order...

DeSean Jackson's ankle injury opens up an opportunity for Humphries to see more targets and production. That was the case last Monday as Humphries caught each of his five targets for 43 yards and a late touchdown versus the Falcons. Humphries is your typical short, quick slot receiver, cut from the same cloth as Cole Beasley and the like. Thus, he doesn't have a high ceiling, but he is definitely going to see an uptick in targets due to the Bucs' shorthanded receiving corps. Besides Jackson, don't overlook the fact that O.J. Howard has been placed on injured reserve, and Cameron Brate is gimpy as well. Humphries is a worthwhile play, especially in PPR leagues, versus the Panthers, who have allowed the ninth-most fantasy points per game to wideouts this season. As of Thursday, I have listed Humphries as the No. 38 WR for this week in standard leagues. Again, he is a decent WR3 in PPR formats.

Let's just say it: The Bengals have quit. They just want this season to be over with and they have played as such over the past two weeks against the Bears and Vikings. They allowed 85 yards from scrimmage to Tarik Cohen in Week 14. Then, Jerick McKinnon gobbled up 138 yards last week versus Cincy. And now, here comes another quick, catch-first back in Riddick. It looks like he will play through his wrist injury. Of course, any injury he does have really isn't a worry for this game when you account for the Bengals' recent disinterest in tackling. Riddick is always most favorable in PPR leagues, but I think he is a solid flex play in all formats.

I expected RS-J to have a nice game last week versus the Redskins with Jermaine Gresham on the shelf. Instead, he took a backseat to Troy Niklas, who compiled 30 more yards and 45 more snaps than Seals-Jones. Well, the injury gods must be RS-J fans, because Niklas suffered an ankle injury in Week 15 and didn't practice Wednesday. If he can't go, the Cardinals will basically have no choice but to put RS-J on the field against the Giants, and no team has been more generous to tight ends this season than Big Blue. Keep an eye on Arizona's practice reports, but if Niklas is ruled out, fire up Seals-Jones in this golden matchup at home. He is Levi Andrew's No. 20 TE this week, as of Thursday.

I'm not sure how much of a sleeper is at this point since he was one of this week's top free-agent pickups, but considering that he is still on the wire in more than half of all Yahoo leagues, it's clear that a hefty amount of people are still sleeping on him. Considering that Marqise Lee will miss Week 16 and Allen Hurns is still not fully healthy -- although he might play this weekend -- it looks like Cole will be no worse than the Jags' No. 2 wideout behind Dede Westbrook in San Francisco on Sunday. That's kind of the same role he filled last Sunday following Lee's early exit, and Cole took advantage to the tune of seven catches on nine targets for 186 yards and a touchdown. That yardage total won't be topped this year, but given Cole's larger profile in this offense, Blake Bortles' recent string of solid play and the Niners' leaky secondary, more fantasy owners need to trust Cole in their championship matchups. He's at least a WR3 in all formats right now.

Here's another Cardinal who is worth a shot in deeper leagues because of injuries to those ahead of him on the depth chart. David Johnson is out. Adrian Peterson is out. Kerwynn Williams is probably out. So, only Penny and D.J. Foster remain in Arizona's backfield. Penny gained 45 yards on 10 carries in place of Williams after he went down with a quadriceps injury. As long as Drew Stanton and this offense can keep from falling behind early, Penny should get the majority of the touches between the two as he, at 6-foot-2 and 234 pounds, is more of the prototypical early-down pounder and goal-line option. The 195-pound Foster is more of a third-down back. The Giants have given up the eighth-most fantasy points to running backs this year, including three rushing scores to RBs over the past three weeks. Admittedly, Penny is more of a gamble than the other players on this list, but the Cardinals should be able to move the ball in the desert against this injury-riddled defense, and Penny will be there to finish any drives that reach deep into the red zone.

Can you trust Joe Flacco in your fantasy championship round? You may not want to, but you should know that he has scored at least 17 fantasy points in each of the past three weeks and has a home matchup with the Colts on deck. Indianapolis, which will have to travel on a short week, has permitted the eighth-most fantasy points to QBs this season. The Colts even allowed Brock Osweiler to throw for a couple of TDs and tally 25 fantasy points in less than four full quarters last week. You may not be inclined to start Flacco over someone like, say, Matt Ryan at New Orleans, but I think that's actually a close call. If you're an owner of Kirk Cousins (vs. Denver) or don't have a good backup behind Aaron Rodgers, try Flacco and watch this offense fly Saturday afternoon.