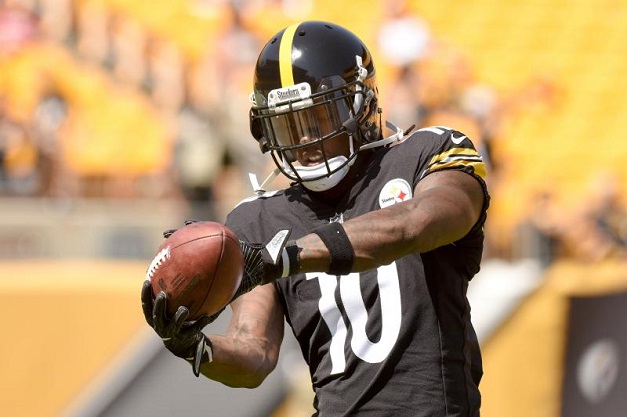 Suffice it to say that Bryant hasn't lived up to my lofty expectations for him this year. However, he can still help you win a fantasy league championship this weekend. With Antonio Brown sidelined with a partially torn calf muscle, there are beaucoup targets up for grabs in the Steelers' offense. Brown's absence raises the Week 16 potential of all of Pittsburgh's secondary receivers, but it is Bryant, with his natural big-play ability, who could really benefit. The Texans have allowed the seventh-most fantasy points per game to wideouts and have had problems containing speedy, deep-threat WRs, which perfectly describes Bryant. He posted a 4-59-1 on six targets versus the Patriots in Week 15, and most of that production came against quality cornerback Stephon Gilmore. Bryant should be able to improve upon those numbers against Houston's lesser CBs, especially as more opportunities await.

Speaking of wideouts who have torched the Texans.... Up until this point, I have largely ignored Cole because, despite his recent run of good production, he garnered just three targets in each of the past two games. Then he went off Sunday versus Houston for seven receptions, 186 yards and a touchdown on nine targets. It is and will undoubtedly be his best game of the season, but Cole has now scored in three consecutive weeks and looks like the Jags' No. 2 wideout while Marqise Lee and Allen Hurns are nursing ankle injuries. Plus, don't look now, but Blake Bortles is actually playing really well. Cole is another player who will be a useable WR3 this weekend as he faces the 49ers' below-average pass defense.

I didn't list Foles in this column last week because I just didn't know how you could trust a quarterback who has made one start since 2015 in your fantasy playoffs. Yet, Foles was serviceable against the Giants. He didn't play as well as his numbers may state; his four touchdowns were largely the combination of the Eagles' defense giving him short fields and the Giants' defense being terrible. But he didn't make mistakes and relied heavily on his top receiving options as Alshon Jeffery and Zach Ertz saw a combined total of 19 targets. The Raiders' secondary doesn't present much more of a challenge than the one Foles just beat, so if need a high-floor QB with a good matchup this weekend, I think Foles is at least a top-15 option.

The Bears' defense is available in more than 70 percent of Yahoo leagues, so you probably don't realize that it's been stellar lately, at least for fantasy purposes. Chicago has recorded multiple sacks in all but one game this season to go along with eight takeaways in its last five contests. And whom are the Bears facing at home in Week 16? It's the Browns. They aren't the Monsters of the Midway any longer, but this group is definitely a strong streaming option against DeShone Kizer and Co.

Facing the Panthers' defense is not a cushy task for running backs this year, but if you are in desperate need of an RB2 or flex option, I think Barber is at least going to see 15 or so touches in Week 16. Doug Martin was a healthy scratch on Monday night after he committed an unspecified team rules violation. But really, the Bucs have no incentive to put Martin on the field anyway since they are probably going to release him during the offseason. Barber was not revelatory versus the Falcons (16 touches, 68 yards), but the workload is enough to make him someone worth considering. Maybe I'm just grasping at straws here and nothing I've said about Barber will hold true come Sunday when Martin is back in the lineup. But the fact is that Martin's career in Tampa Bay is all but over. The Bucs should start the process of moving on without him, and that would mean giving Barber a longer look during the final two weeks of the season.