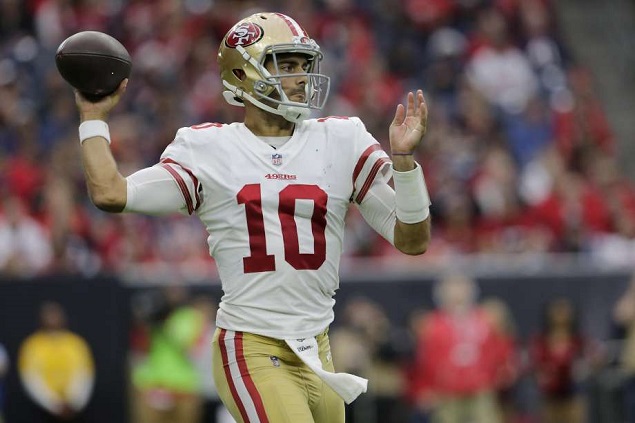 For those new to this column, the following list assumes that waivers have run in your league and that those who were picked up were possibly covered in an article from ASL's Brian Murphy. We are here to look for more players who are less than 50 percent owned, have a chance to contribute in this weekend's slate of games and could be good adds for the rest of the season.

QB Jimmy Garoppolo, San Francisco 49ers: Injuries last week to our suggested sleeper (Josh McCown) as well as Carson Wentz mean there could be some teams involved in semifinal or championship matchups that need help at the QB position. If you are in this situation and looking for a streaming option, take a gander at Garoppolo. He takes on a Tennessee Titans defense that is traveling west and has not performed particularly well this year, especially against the pass. Garoppolo has had a couple of weeks to get comfortable in the offense and has thrown for more than 290 yards in both his starts, which came on the road. Now he has a chance to start at home and could be a huge surprise this week. He is owned in 35.3 percent of ESPN leagues (up from about 21 percent last week), so there is a good chance he is available in your league. I would not be afraid to play him this week if you are still alive in the playoffs.

RB Rod Smith, Dallas Cowboys: We had him last week as a hot sleeper pickup and he delivered big time. This week, he goes against an Oakland defense that just last week reminded many why Kareem Hunt was such a big fantasy factor early in the season. Smith should see opportunities again this week in both the run and the pass game. I think Alfred Morris will still see the bulk of the carries, but Smith appeared to figure out in Week 14 that his best option is to run straight up the middle and run hard. It also helped that he caught a little dunk pass over the middle and raced to the end zone for an 81-yard TD. Smith has scored in three consecutive games and should put up a solid number of points against Oakland's downtrodden defense. He is still available in more than 60 percent of ESPN leagues.

RB Mike Davis, Seattle Seahawks: This is a great matchup for Davis, who has shown over the past couple of games that he is capable of carrying the load. Granted, he picked up a rib injury last week, but he was able to practice Wednesday. Davis hasn't exploded yet, but with at least 15 carries in each of the last two games, he is still receiving plenty of opportunities and should find the end zone this weekend. If he is ruled out come Sunday afternoon, consider grabbing Davis' teammate J.D. McKissic and plugging him in for this week.

WR Tyrell Williams, Los Angeles Chargers: Williams is owned in 21.5 percent of ESPN league and will go on the road to face the Chiefs in Week 15. The Chiefs' defense shut down the Raiders last week. Shutting down a red-hot Philip Rivers is a much tougher task, so great opportunities lie ahead for the Chargers' top wide receivers. Rivers likes to throw the ball -- a lot -- and he usually looks deep before checking down to an RB or a TE if he gets pressured. The Chiefs don't really have a pass rush, which is putting enormous pressure on their defensive backs, and so far this season they have been beaten -- a lot! Williams had a huge game last week against Washington and while a repeat is unlikely, the upside for Williams is undeniable, and his floor for this week should be high enough to warrant a place in your lineup if you are looking for a WR3.

WR Dede Westbrook. Jacksonville Jaguars: Westbrook has been very solid over the past couple of weeks while leading the Jaguars in targets, catches and yards. He seems to have found a good rapport with Blake Bortles. Westbrook was mentioned in this column last week and yet he is still owned in just 24.7 percent of ESPN leagues. However, he should be someone you pick up and play this weekend with confidence. Houston's defense has given up a lot of points to opposing WRs, so Westbrook could easily replicate his recent box scores. A 6-80-1 line seems very reasonable. Westbrook's remaining schedule features San Francisco and Tennessee, both of which appear on paper to be good matchups for him.

TE Benjamin Watson, Baltimore Ravens: Watson was a favored sleeper earlier in the year. It's time to welcome him back because in this crucial week for fantasy owners, Watson will face a Browns defense that seems to love allowing TEs dance in the end zone. I think Watson sees the end zone at least once Sunday. On that rationale alone, he warrants serious consideration this week. Watson is available in about 90 percent of ESPN leagues. If he is available in yours and you need help at tight end, give him a shot.