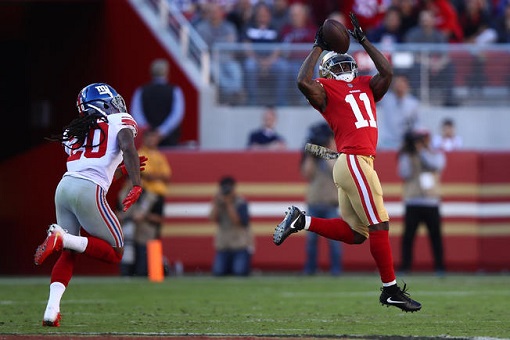 We all know about the Sacksonville defense, but the Jaguars' offense has become more dangerous thanks to this rookie. Westbrook's yardage output has increased in every game since he made his NFL debut in Week 11, and he just scored his first touchdown as a pro this past Sunday against the Seahawks. Blake Bortles' passes aren't always accurate, but at least he is sending many of them in the direction of Westbrook, who has averaged 8.25 targets through four games. Westbrook's regular season will conclude against three defenses that have problems defending speedy wideouts: Houston, San Francisco and Tennessee. He's owned in only 30 percent of Yahoo leagues as of Monday night, but Westbrook will be worth starting as a WR3 on some fantasy playoff squads in 12-team leagues. The same holds true for the next man on this list....

Test your fantasy football prognostication skills and try to win some big money in this $3 Contest on DraftKings.

Goodwin used to be a one-trick pony, but it is a hell of a trick. An Olympics-worthy track star, Goodwin is one of the fastest players in the NFL. But he's no longer running solely go routes these days. He has become a more complete receiver, and that's been proven through his increased usage. Goodwin has caught 14 of 20 targets over the past two weeks for more than 200 yards. And how about this fact: The only four wide receivers who have gained at least 75 receiving yards through each of their last four games are Goodwin, Antonio Brown, DeAndre Hopkins and Keenan Allen. Pretty nice company. Goodwin should be given strong starting consideration this weekend versus the Titans. He is still available in about 45 percent of Yahoo leagues.

This is my first time writing this column in 2017, so there is one thing you should know about my fantasy football habits before we go any further: I stream defenses. Always. I never draft a defense before the final two rounds and I'm always looking ahead at the matchups on the horizon. If you subscribe to a similar philosophy, how can you turn down the Saints' defense for Week 15? Available in more than 60 percent of Yahoo leagues, the Saints have a tantalizing home matchup versus Bryce Petty and the Jets on tap. Petty replaced an injured Josh McCown on Sunday and completed only two of nine throws. Only one of those two completions came past the line of scrimmage. The Saints will get to tee off against a QB who isn't ready to start in the NFL and an offensive line that has allowed 13 sacks in its past four games. Expect sacks and turnovers aplenty for the Who Dat defense Sunday.

There's not much out there if you're looking for running back reinforcements. The best options among the widely available are probably Stewart or the Lions' Theo Riddick. But since I'm not a fan of RBs who are in three-man backfields, I'll talk up Stewart a little bit. He scored three times Sunday versus the Vikings in one of the most unexpected performances of the year. Yet, scoring is what Stewart does. He's not going to gobble up the yards -- he has averaged fewer than 50 ground yards per game, and 60 of his 103 yards this past week came on one play -- but he has broken the plane five times in the last three weeks. Upcoming home matchups versus the Packers and the Gerald McCoy-less Bucs should present Stewart with more goal-line opportunities. Stewart needs to score in order to be valuable, but he should be able to keep his TD streak going against two vulnerable run defenses.