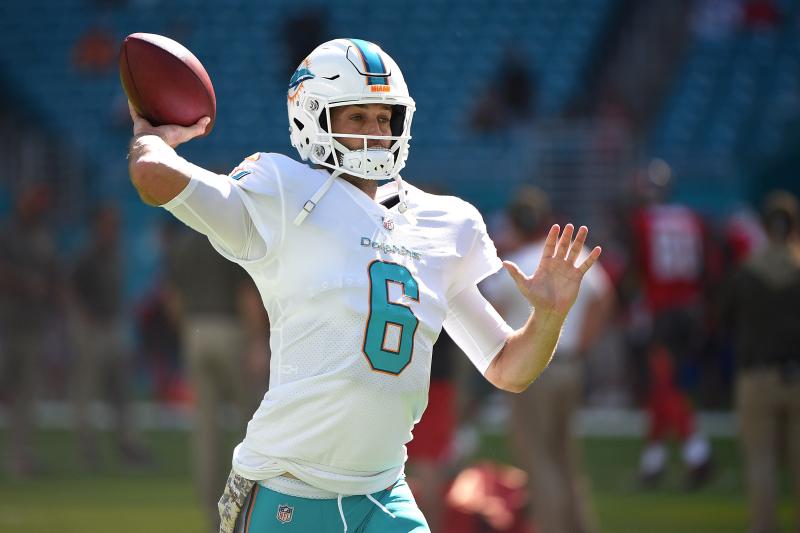 QB Jay Cutler, Miami Dolphins: Cutler returns from the concussion protocol and was named as the starter by Head Coach Adam Gase to play Denver on Sunday. Cutler has not had a great season and has struggled in 3 of his 9 starts putting up single digit performances in standard leagues. That being said he faces a Broncos defense that appears to be a shell of its former self, and with struggles continuing on offense (where they continue to search for a viable QB starter), there is a chance this week that Cutler can put up similar numbers to those he showed against another AFC West team a few weeks again when he threw for 311 yards and 3 touchdowns against the Raiders. To be honest I am not expecting this type of outing, however he is only owned in 9.4 percent of leagues per ESPN, and so if you are desperate (had Aaron Rodgers go down and were using Ryan Fitzpatrick the last couple of weeks ... don't laugh that is my situation in one league!), then Cutler could be an option especially in deeper leagues where he may have been dropped by another owner.

RB Jacquizz Rodgers, Tampa Bay Buccaneers: It appears that Jameis Winston will be back under center for the Bucs this week against Green Bay, and there is a chance Doug Martin either misses the game completely or will see a reduced workload as he recovers from a concussion last week which should open the door for Rodgers to see more action. He will get the first shot at carrying the rock if Martin is out, but he will need to hold off both Peyton Barber and Charles Sims if he is to put up a decent fantasy output. Owned in just 7.7 percent of leagues he is a desperation play with upside.

RB Austin Ekeler, Los Angeles Chargers: Ekeler is owned in 25.7 percent of leagues and many fantasy owners have been savvy enough to pick him up a couple of weeks ago and have been nicely rewarded over the past 3 games. This week they play against Cleveland, which is not nearly as bad as its record suggests. However, the Chargers have shown that they can score points this season and with renewed hope of making the postseason, they have a lot to play for. They are at home and heavy favorites this week, so if they are able to establish a lead early we could see a lot of Ekeler in the second half. He is a solid stream in PPR formats and worth consideration in standard leagues if you are struggling at the RB position due to injuries.

WR Josh Doctson, Washington Redskins: Doctson has been an up and down player this year seeing 2 or fewer targets in 5 of 9 games that he has played in, yet has still managed 4 TDs from limited targets. He is a long ball home run type player and Kirk Cousins has shown that he is willing to throw the long ball to Doctson (and others) over and over. Doctson should see more targets against a poor Dallas defense and there is a good chance he could score his first multi-TD performance of the year. He is a really good option in standard leagues or leagues with the bonuses for long touchdowns. But this week, I think he is a strong play in PPR as well. He is owned in 49.7 percent of leagues (and has already seen a heavy increase in adds this week, up 12.4 percent per ESPN), so now is a good time to grab him. The next couple of weeks also look good for Washington as they face: Chargers, Cardinals, Broncos and Giants, all of whom could yield significant fantasy points to WRs.

WR Seth Roberts, Oakland Raiders (PPR) or WR Cordarrelle Patterson, Oakland Raiders (Non-PPR): Both Roberts (4.9 percent owned) and Patterson (2.8 percent owned) should get more opportunities this week with the suspension for Michael Crabtree, and the very high likelihood that Amari Cooper is also going to be out as he tries to work his way through the concussion protocol. Whether it will be Roberts, Patterson or even Johnny Holton who will benefit most is tough to figure out. I think Roberts is the slightly more known commodity and in PPR leagues he is someone I would want to target, whereas Patterson has the more home-run potential and is someone that I would look strongly at in non-PPR formats. Against the Giants defense that held Kansas City well a couple of weeks ago, but outside that game have been very susceptible to the WR position - last week against Washington they gave up 12 completions for 184 yards and 2 TDs and back in week 9 they gave up 9 completions for 209 yards and 3 TDs to the Raiders. I think that Derek Carr is similar in his willingness to throw down the field as Cousins and Jared Goff are. Combine that with the fact that Marshawn Lynch will be heavily featured and I can see play-action opportunities aplenty for Los Angeles' WR corps.

TE Benjamin Watson, Baltimore Ravens: Watson has been a solid contributor at the TE position for fantasy purposes following his goose egg in the first week, however since the bye week he has been less of a focal point in the offense and hasn't found the end zone in 3 games. I think this changes this week against a Detroit defense that has been reasonably bad against the TE position (giving up 3 TDs in the past 2 weeks and plenty of catches over the last few weeks). At home and with some momentum coming off their win on Monday night against Houston I like Watson to be more heavily targeted in this game - especially in the red zone.