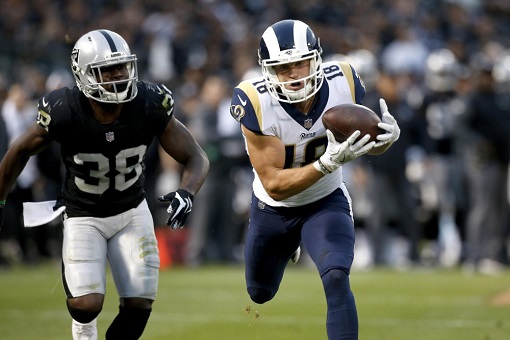 What do I look for when I need to pick up a receiver from the waiver wire? That’s right -- targets. And Cooper Kupp is what is known as a target-rich player. Rams QB Jared Goff has targeted Kupp at least seven times in four of the team’s last five games and PPR fantasy owners are reaping the benefits. Kupp caught eight of his 11 targets for 116 yards during his Week 12 matchup against the New Orleans Saints. With Robert Woods on the shelf with a shoulder injury, Kupp is Goff’s favorite receiver. Woods' status is still up in the air for Week 13, but Kupp has earned a spot on all PPR fantasy squads.

Chargers RB Austin Ekeler has not been able to repeat his huge Week 10 performance against Jacksonville when he caught five passes for 77 yards and two touchdowns. However, he’s been able to crack double-digit fantasy point totals in three games straight now and has a GREAT schedule moving forward. Even though Ekeler didn’t score on Thanksgiving against the Cowboys, he did haul in three passes for 55 yards, and that’s where fantasy owners will continue to receive value from the Chargers rookie. The Bolts are at home this weekend for a juicy matchup versus the Cleveland Browns. Expect the good times to continue for Ekeler.

I am lukewarm on the proposition of picking up Jets WR Jermaine Kearse. Yes, Kearse posted his first 100-yard receiving game this season on Sunday against the Panthers, bringing in seven receptions for 105 yards and one touchdown. However, his production has been very up and down, and Week 12 marked the first time in five contests that he surpassed 38 yards. Kearse sees his fare share of targets, but his yards after the catch leave something to be desired. He is certainly worth an add in larger leagues, but if you play in a 12-team league or smaller, leave him on the shelf. At least the matchup is on Kearse's side this weekend as the Kansas City Chiefs have allowed the second-most fantasy points per game to wideouts this year.