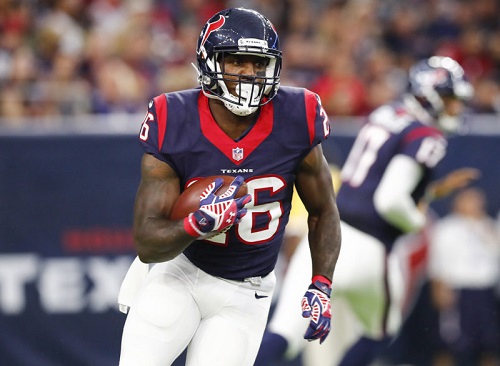 Like all of the Houston Texans, Lamar Miller took a considerable hit when Deshaun Watson went down with a season-ending injury. He had a pedestrian Week 10 against the Los Angeles Rams, failing to register double-digit fantasy points in any setting for only the second time this season. If fantasy owners were hoping that Miller’s schedule would ease up, they are going to be disappointed. The Arizona Cardinals are coming to town for Week 11 and boast a top-10 run defense. That's not good news for a Texans team that is lacking confidence. Most fantasy owners will be forced to start Miller anyway, but they are likely staring down the barrel of another disappointing fantasy performance.

There are several factors working against Marcus Mariota in Week 11:

- He is working on a short week.

- He has thrown only four touchdowns in his last four games.

- The Steelers are a top-three defense against opposing quarterbacks.

The bottom line? During this season, Mariota has a tendency to fold under pressure. Don’t get me wrong, the Titans have won four games in a row, but their opponents have been the Colts, Browns, Ravens and Bengals. The Steelers like to bully opposing quarterbacks, and Mariota could be in for a very long day.

Things were looking up for Kelvin Benjamin. He was in a new city with a new quarterback, and the targets rained down on him from the start in Week 10. Benjamin didn’t set the world on fire during his first game as Bill, but six targets from Tyrod Tayor was a great sign moving forward. Benjamin finished last week's loss to the Saints with three catches for 42 yards, but he and Taylor already had a rapport building. Then somehow, out of nowhere, the Bills' front office pulled the plug on Taylor, benching him in favor of some rookie fifth-rounder named Nathan Peterman. The rookie will get his first start against a top-10 Chargers pass defense on the road, making Benjamin nothing more than a high-risk flex option who will spend all day watching LeSean McCoy run the ball.